The Knees needed their daily.

Curiosity looked at the map and suggested this. 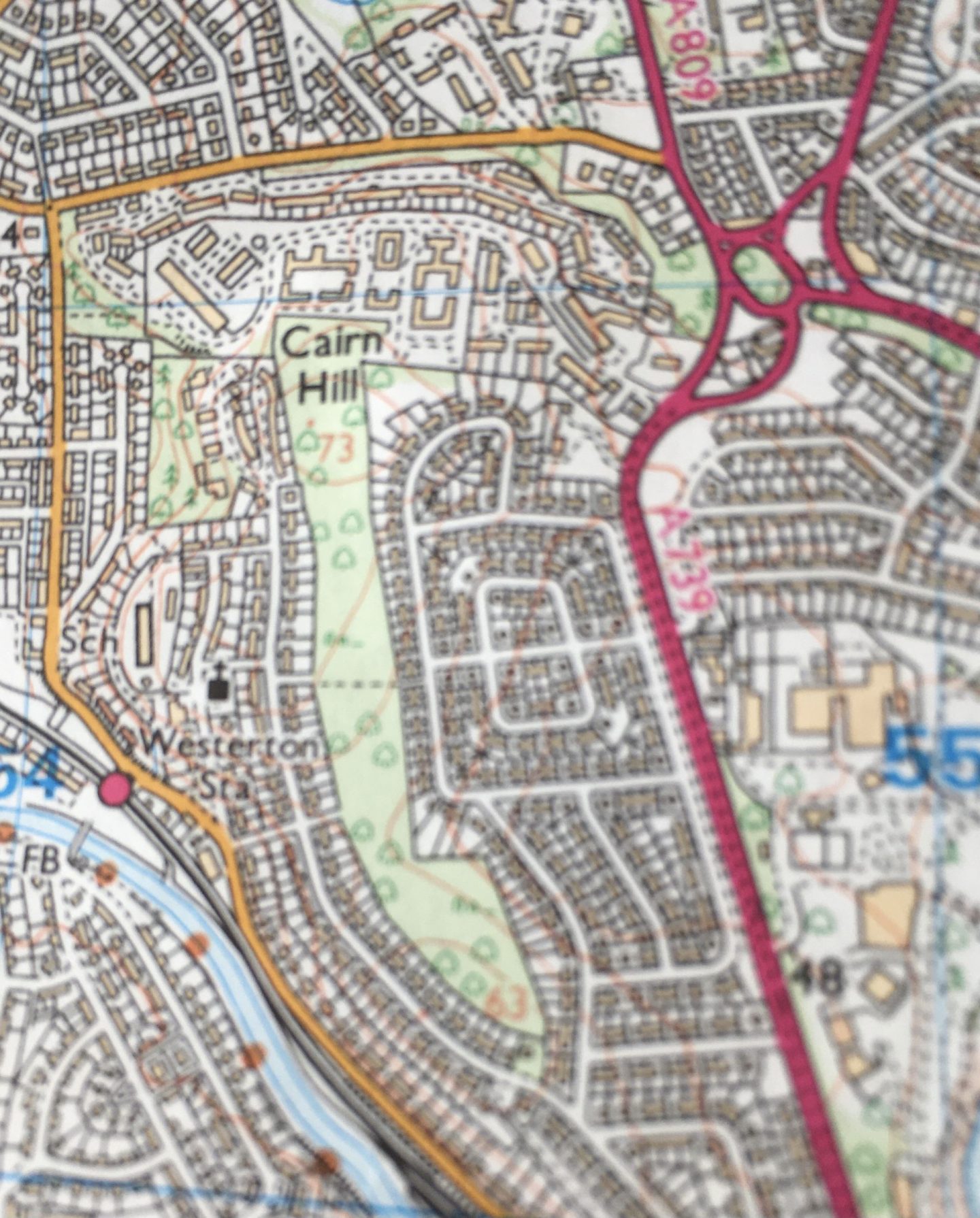 A thin strip of woodland, apparently a ridge between two suburban areas just north of Glasgow.

It turned out to be as hoped a bluebell wood. 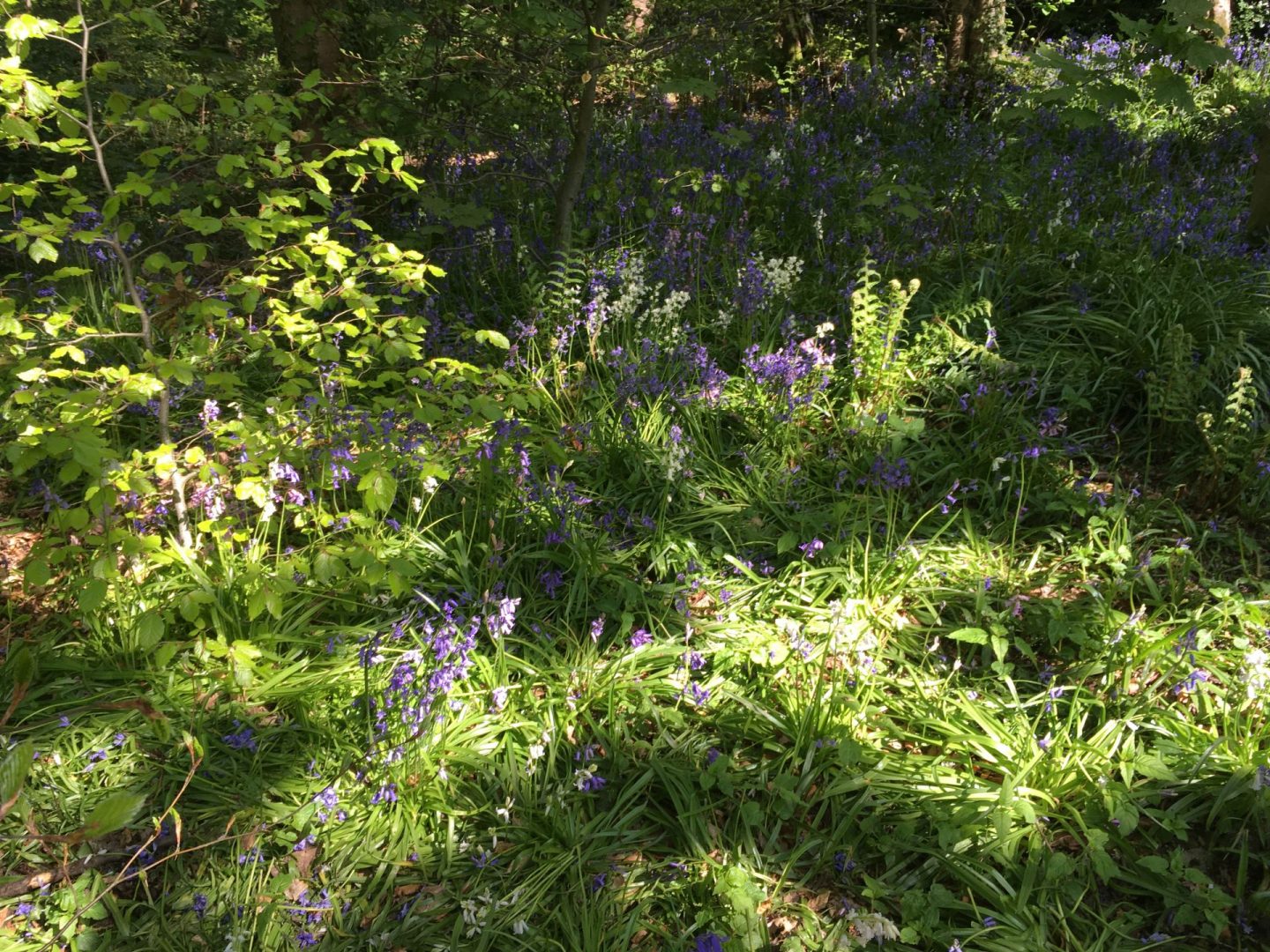 Clearly a green space enjoyed by the community. Clean with well gravelled paths, good for wheelchairs and an information board.

But the big surprise today  – There always is one on these trips – was this: 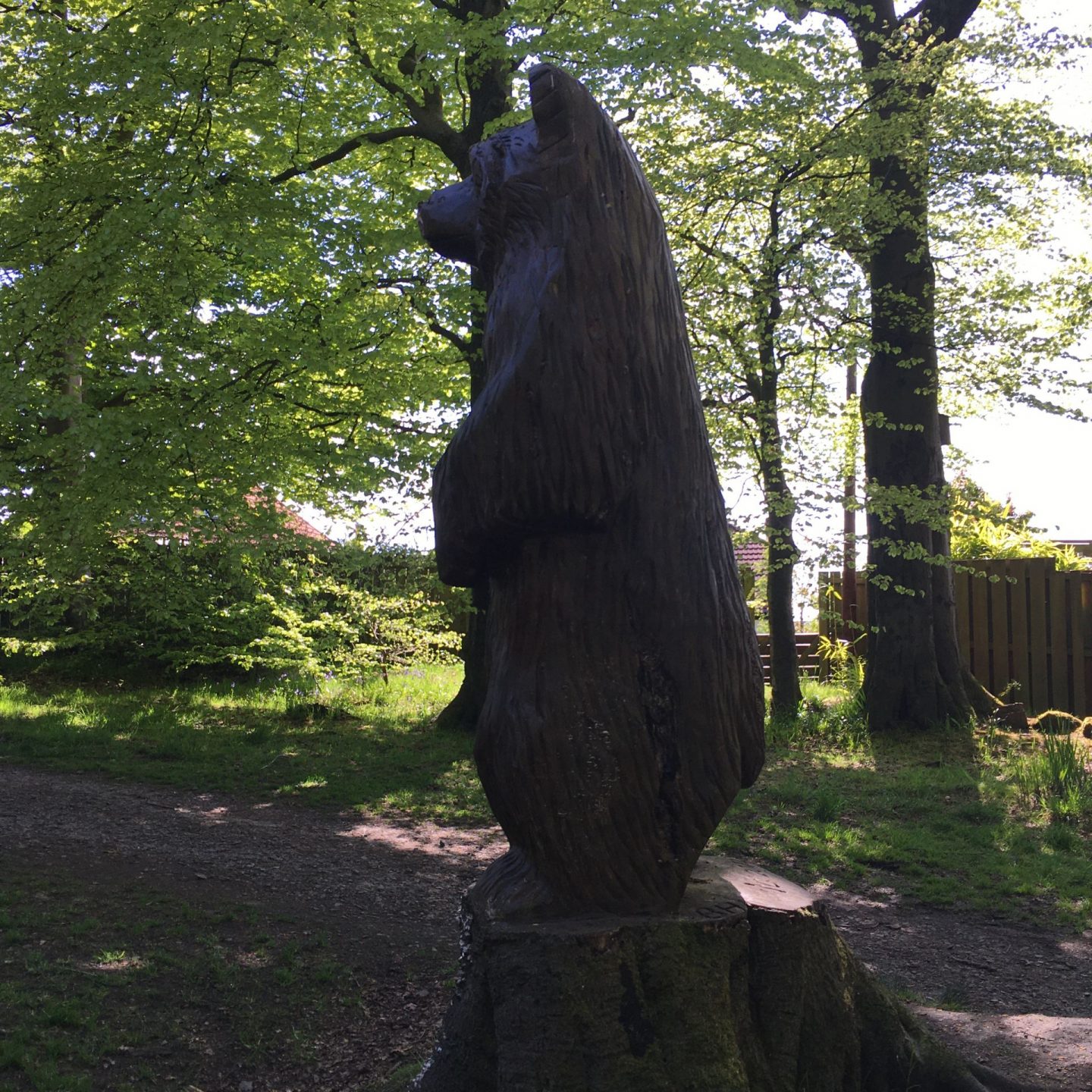 A huge bear on the path. Somewhat fearsome

But friendlier when it turned out to be Three Bears. A whole family.

Here is the story , discovered later on Google.

From the local paper

There have been reports of sightings of bears in Bearsden, but don’t be alarmed, they’re of the wooden variety. Thanks to a woodland development project by East Dunbartonshire Council, Cairnhill Woods, Westerton has acquired a family of bears in the form of a number of wooden carvings.

The Cairnhill Woods Group, in partnership with the Council’s Neighbourhood Services Greenspace Strategy Team, applied for funding from the Central Scotland Green Network Community Project Fund to create a number of wood carvings throughout the well-known Bearsden woods. The final creations were made by the talented Iain Chalmers of Chainsaw Creations. The grant was aimed specifically at encouraging people to use their local greenspaces and local children from Westerton Primary school were involved in designing the carvings, while also learning about the wildlife of the woods. 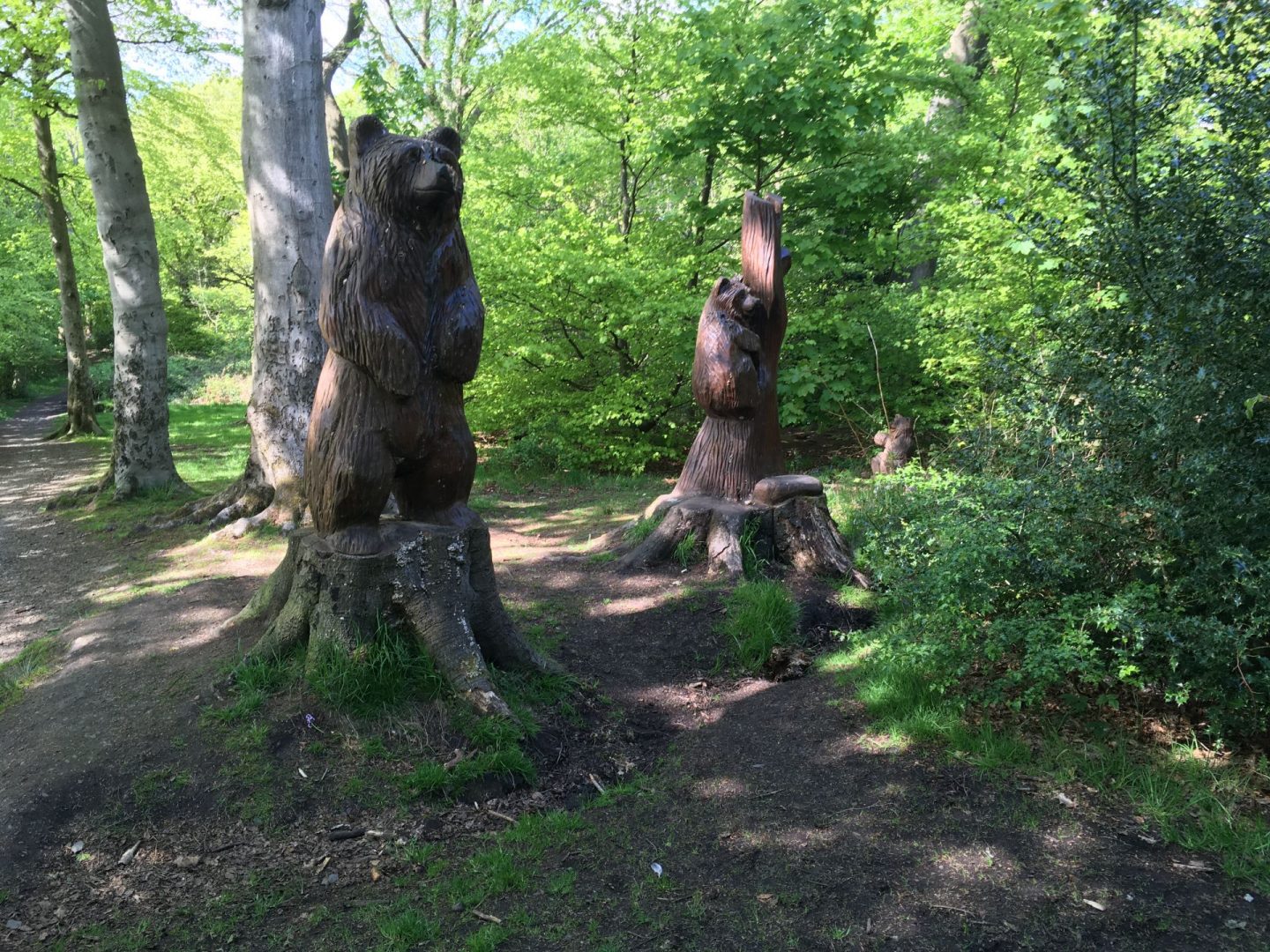 It wasnt just 3 either. A tiny one had hidden in the end of a hollow log which had been carved as a seat for us. 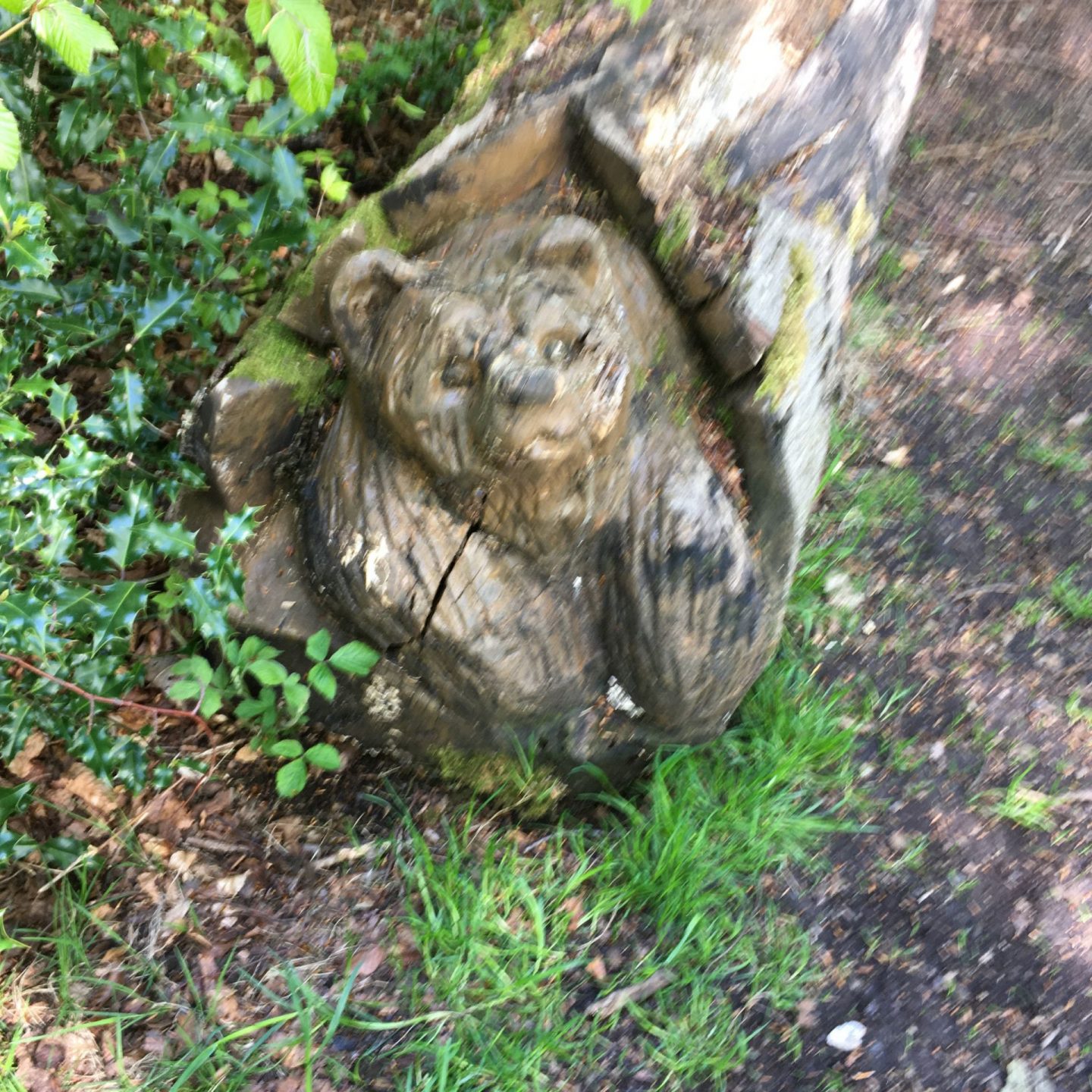 What fun for grandparents living nearby to have this surprise for their grandchildren.  And a joyous surprise for me too. So good to see community projects like this. And plenty of people out there, families, dog walkers cyclists,  all enjoying the sun, the fresh green, wild garlic and bird song in the midst of suburbia.

Curiosity as ever, was justified! There is always something of interest to discover.  Pretty good for the Knees too. A mile or so of even paths.

Once again feeling lucky that at 85 there are still days of joy and interest to be had with a map.