Nine o clock,…time for bed.  About what you would expect of a pair of 80+ year olds on holiday?

Sort of needed when you are up every day at 4.30am for a boat birding trip in Malawi.

We are just back and had breakfast. Decided to go back to bed for a bit more snooze time.  Or try to stay awake and write this while the day heats up. It was 38 degrees yesterday…..and that level of heat and humidity is overwhelming.

So what pleasure, a cool sunrise trip along the River in Africa’s Great Rift Valley watching Hippos, Elephants and Crocodiles as we drifted.  But mostly slowing for what was surely the best ever picture of a Fish eagle taking off on huge black wings plus an elegant Yellow Billed Stork posing perfectly in the dawn light.

Well would have been, if I had managed to charge my camera properly.

We were staying in tents and thatched huts. No. Not you average pup tent! Though the sound of the zips brought instant nostalgia for wet nights in the Yorkshire Dales.

What would my Guide Captain have thought of her Forget me not Patrol leader coming down to camping like this? 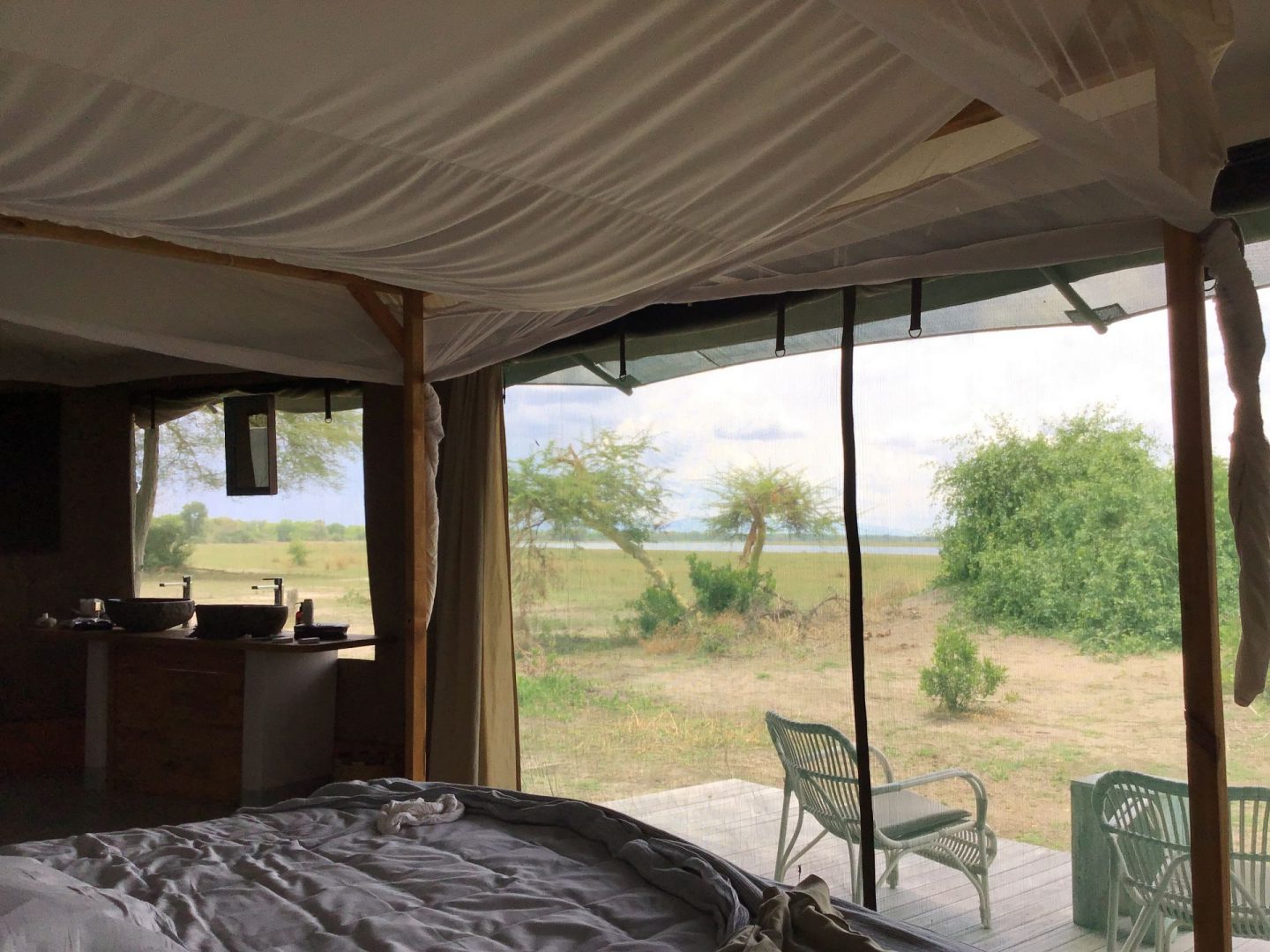 Sadly, it is what happens when you get old.  Had to abandon my lightweight two man tent some years ago. And now having downsized we can treat ourselves to this!  An air conditioned tent and mosquito net looks fine. Maybe a Safari at 84 is OK? Even with partners Parkinson’s and my knees…

However even luxury safari camping proved to have its problems.

Had never expected the ubiquitous Age Unfriendly bath in the African bush! The ultimate in ridiculousness?

And Jeeps are definitely not designed to be Age Friendly either. Steep steel steps…All the dire warnings about what happens if you don’t keep on with the pull ups and  squats prove to be correct.  Much joking about having a crane to help clamber up and in. Easy getting out though, just fall.

The same turned out to be true trying to climb into a little 6 seater Cessna plane to get here. Pathetic.  But eventually made it and worth it.   And wasn’t airsick….

(I’ve been tweeting recently that we need a complete rethink about Transport for this active ageing population of ours. We clearly do! But maybe not for this?)

A Waterbuck has just strolled by the tent and a group of Warthogs are playing tag to my left.

Luckily, I find the world usually manages to adjust to my rusty knees. At the last Lodge we were given a thatched hut but with 5 steep rustic steps up to the door.  No handrail….  But in no time they had one up for me.  A wooden post and a firm branch did the trick. Can’t quite see that happening in the U.K…

Evening.  It is cooling a little and the Hippos are coming out of the river to graze. Dozens of them.  They look like a herd of rather fat black cows with some cute calves. They will come as far as the tents at night, but no problem.

This evening we shall do an evening drive into the bush, coming back by torchlight. Probably have the road blocked by elephants again.

At our last lodge an elephant joined us for dinner. He was happily reaching up for the fresh leaves of the tree just across from our table. Stayed quite a while. And we had  giraffes as breakfast visitors. 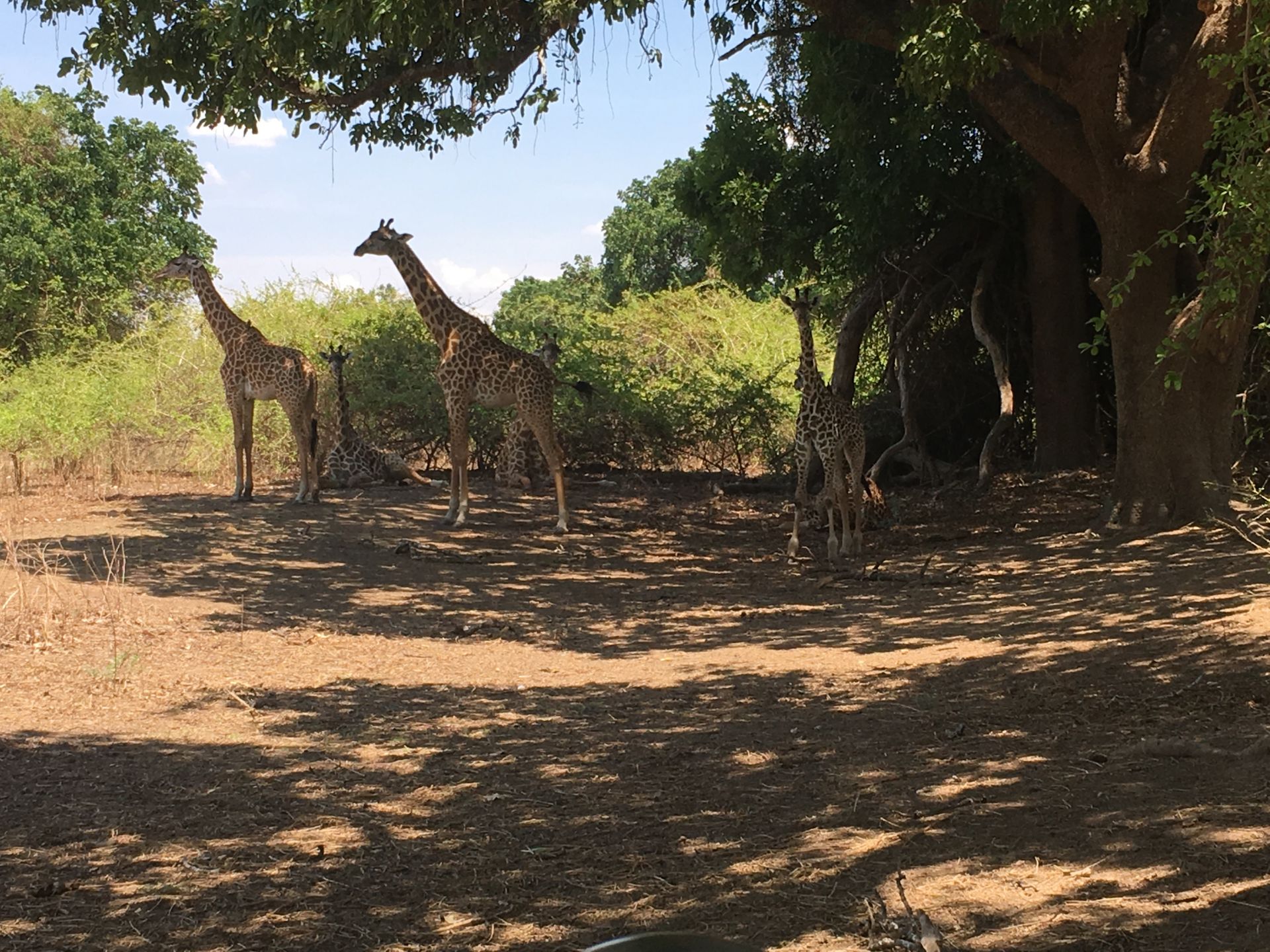 Another visitor came into our hut. Just managed to catch him leaving. 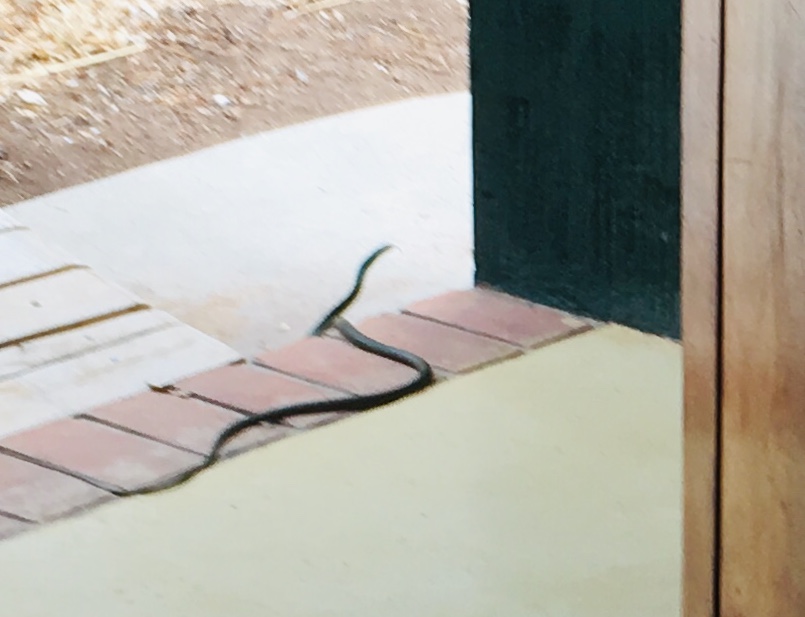 But I don’t suppose we shall see anything again as exciting as at the last lodge.  On the am. safari we had found a pride of lions keeping cool under a tree, about 12 of them. So dozy and apparently well fed that we could get within 20 feet with no reaction.  Pussy cats. 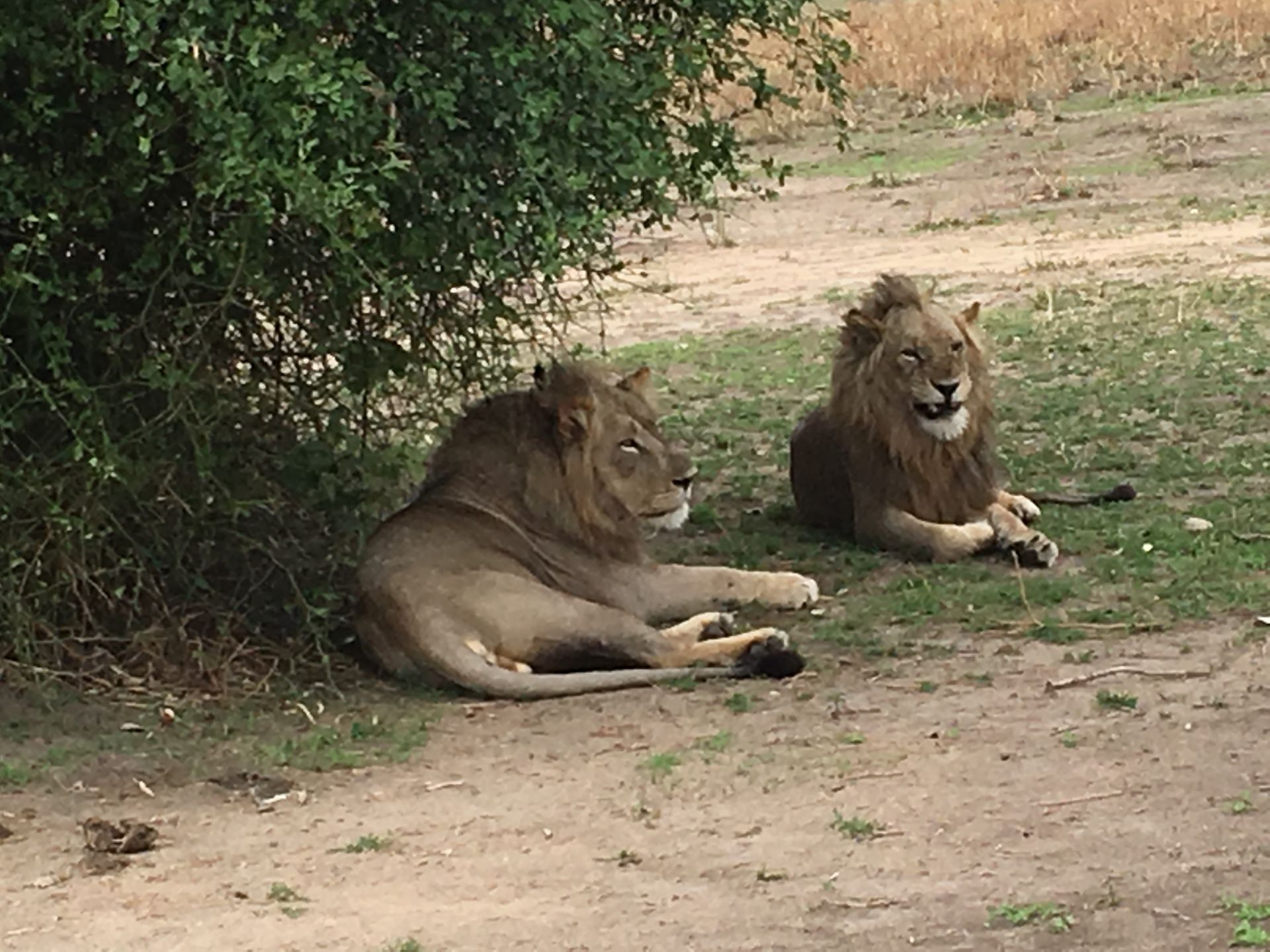 But suddenly one raised its head, sprang to its feet and was off. Within seconds so were the rest, racing  en masse to our right. We couldn’t keep up with them, but did find them a few hundred yards away furiously snarling and fighting. Each determined to get the lions share of an Impala.

Two dozen desolate Vulture s were vainly pecking at the blood stained grass where it had obviously just been killed.

In the  distance a pack of wild dogs were looking equally frustrated.  Our guide assumed that they had killed the impala and that the lion had heard its death cry. Or perhaps spotted the circling vultures.

Watching animal snuff film on TV is not the same as being close to raging lions tearing an impala apart.  And apparently each other!

The viciousness of their fighting and the sound of a lioness crunching an impala leg bone from 30 feet away is rather disturbing… bone chilling!

But this is not a travel blog. It is partly about staying the whole new generation of adventurous people.

Four women in their 60 s are in near by tents. They have challenged themselves to drive up here from Mozambique! Fitter than me, they just hop in and out of jeeps. I expect they will still be doing that and this kind of travel at 90… tough types.

Yes we’re were lucky at 84 to be able to go where we did. But we are not at all unusual.  So many eighty year olds are enjoying  hard challenging activities today…. an amazing new generation out in the hills, sailing, running marathons,  and living adventurous exciting lives.  And not just fit people… difficulties are in themselves a challenge, get that adrenaline kick!    Successfully climbing over a style at 80 +, or going fishing with a Zimmer can give as big a sense of success as a hill climb at 50!

But there was another side to see in Malawi.

The delightful people, their traditional village life, yes. But also the fragility of their economic lives.

You can’t use the word poverty in the UK once you have been to country like this: