Must keep The Knees happy.
(The Knees have developed an amazing ability to judge mileage.  Approaching three miles, and the complaints start. Decided it’s time to listen to them. Need them for a bit longer.)

Beautiful Autumn sunlight and the path along the River Kelvin in Glasgow beckons.

The Kelvin is the river of the song ” Let us haste to Kelvin Grove bonnie lassie O”.And this morning there they were, truly bonnie ones.  But  I fear that most, like this young lady, were hastening to work and not to a romantic tryst.

Pity, because it was such a sparkling morning, one to drink in slowly.

When I first heard them, this teenage group were just playing, messing about stealing each other’s shoes and chasing around laughing. 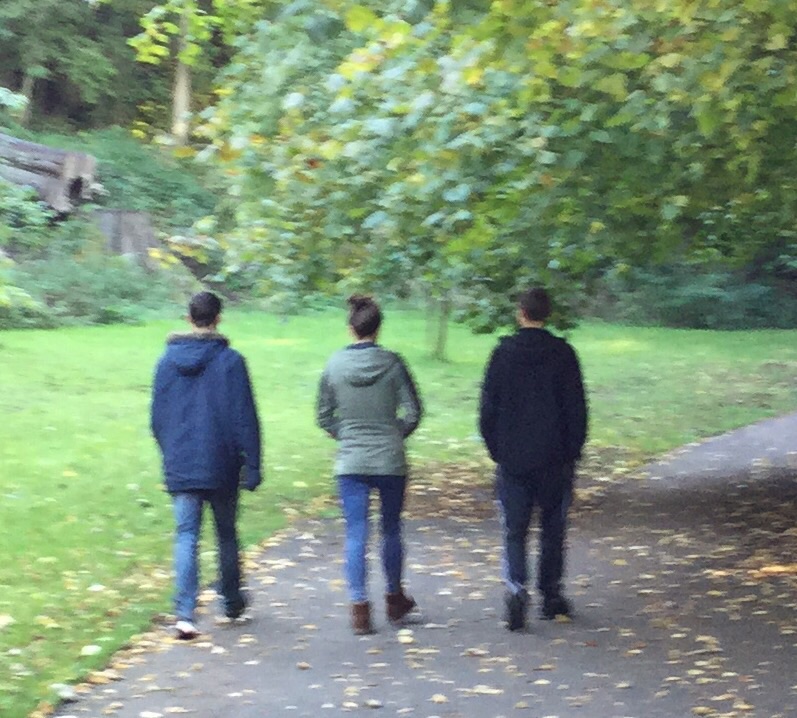 What else to do at that age?

Felt like joining in…it was so good to see and to hear them. It was as if they were unknowing celebrants in an Autumn ritual.

The boy on the left had bright red soles to his trainers. When he ran, they highlighted his every movement, but I couldn’t quite catch them in action.    Tried, (Probably why the picture is fuzzy.)

Can you see just above the boy’s head there is a curious grey tree stump?

What a magical tree. So eerie!  Love the way the roots look like a huge dragon. She has an eye, a mouth and even claws.  Anything could be in that hole!  Dragons eggs?And why has it got a Red Cross?

If I was six I would have been climbing up it, probably a bit scared, but so curious. When it seemed safe we, my sister and I, would have made it into a Fairy Den.  I don’t know what boys did when they discovered a hole like this.  Anyone know?

We would find moss for a lining, and then arrange inside any flowers or treasures we could gather: maybe a pretty snail shell, a feather or unusual pebbles. Enchanting and so beautiful, we knew the fairies would love them.

Do children still believe in fairies?   What a loss if they don’t.

However, I didn’t fancy that climb now, but there was nothing to stop me making a flower picture for the fairies on a nearby stump.It looked like one fairies might dance on.

People walked past whilst I was doing it, eyes averted, though one did nod and grin.

It must have looked odd to them, an old lady playing. But why not?

Have you read my post “Oldies at play? Is that OK?”  I talk about unwitting ageism of that kind.  It is a kind of stereotype isn’t it?  Old people must be sedate.

Though why shouldn’t we play?  It is second childhood time!

One lady walked past, never saw me at all, eyes on the path the whole time.  She missed something lovely,

Look at this! Whilst looking for the right leaves I spotted a gorgeous fungus growing next to the stump.

Aren’t those , fragile, don’t know what to call them, frills exquisite? And it has such  delicate shades of creamy pink, rather like a strawberry vanilla whip.  Maybe the fairies nibble on it for tea?

Such a magical place to be on an Autumn morning.

Something different turned up next.

It was on the pillar of a bridge. 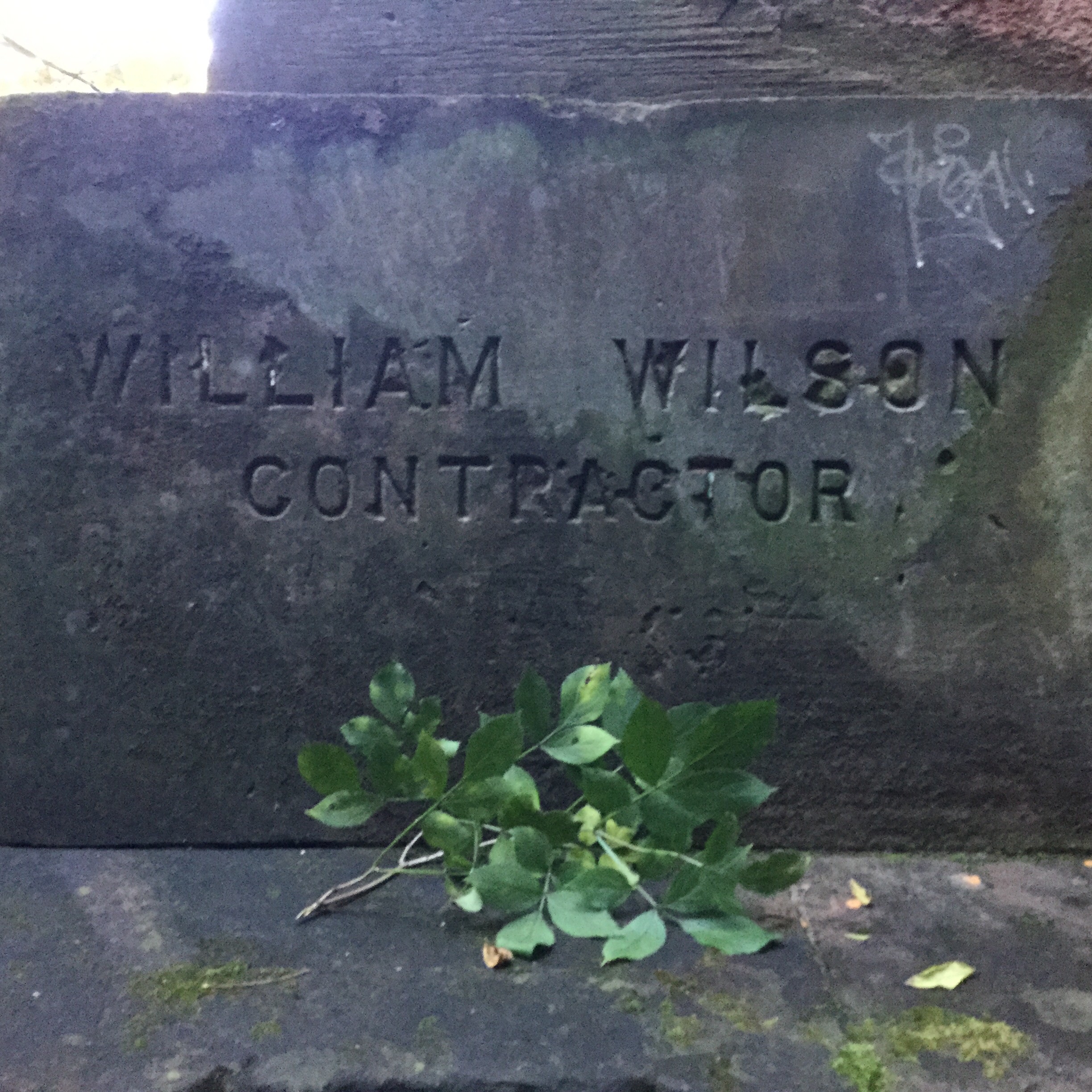 It isn’t often you see a Contractor or Civil Engineer getting credit on a bridge. It is usually some big wig who did nothing except cut a ribbon.

I wondered who he was and did he walk this path with his grandchildren to show them Grandad’s Bridge
It was so good to see I gave him the nearest thing I could find to a laurel leaf award. Elder leaves seemed appropriate somehow…

This is what he had built. Isn’t it stunning?

The wealth of Glasgow in that era must have been amazing. I wonder where he bought the marble for the pillars. Somewhere foreign, Italy.?

Can you see anyone affording  decorative marbles pillars like these for a bridge now!

The path continued following a wall.

Do you ever stop and take a close look at an old wall? Walls are  quite  amazing places , it is like entering another minute world.

So many living things were making a home there. I wasn’t able to count them! Not sure what they were all living on.

You can’t see the spider and beetles on this picture, but there was movement everywhere as they scuttled to hide.

I wondered if they all had their own Des. Res. cranny.  The mosses look as if they do.

Nearly at the Botanical gardens now. They are on the other side of the river. Cross over the bridge and there is one of Glasgow’s finest possessions.
Kibble Palace gleaming in the sun.

Inside it is jungle, tropical flowers, an iguana and thousands of insect eating plants. Another magical place for childhood.

It ended the Magic Morning perfectly.

Well maybe it ended even more perfectly when I headed down Byers Rd to Matilda’s for coffee and breakfast.

Did that undo all the good?  Definitely not. At 84 I don’t feel the need to worry about weight anymore. One of the definite pleasures of being ancient. Although I suspect The Knees will have a moan if I ask them to carry anything extra.I told them not to worry as I didn’t eat the tattie (potato) scone or the toast.

I expect the walk was pretty good for my  heart, even for TheKnees, under protest. But the Magic will be in my head for a long time…I hope.