What would you expect to be behind this door? Hundreds of people were pouring towards it.

Curiosity had to know

It proved to be a weekend exhibition at an Arts and Events Complex known as SWG3. Which has been created in an old industrial area of Glasgow, alongside the railway arches.

And this is what it was about: 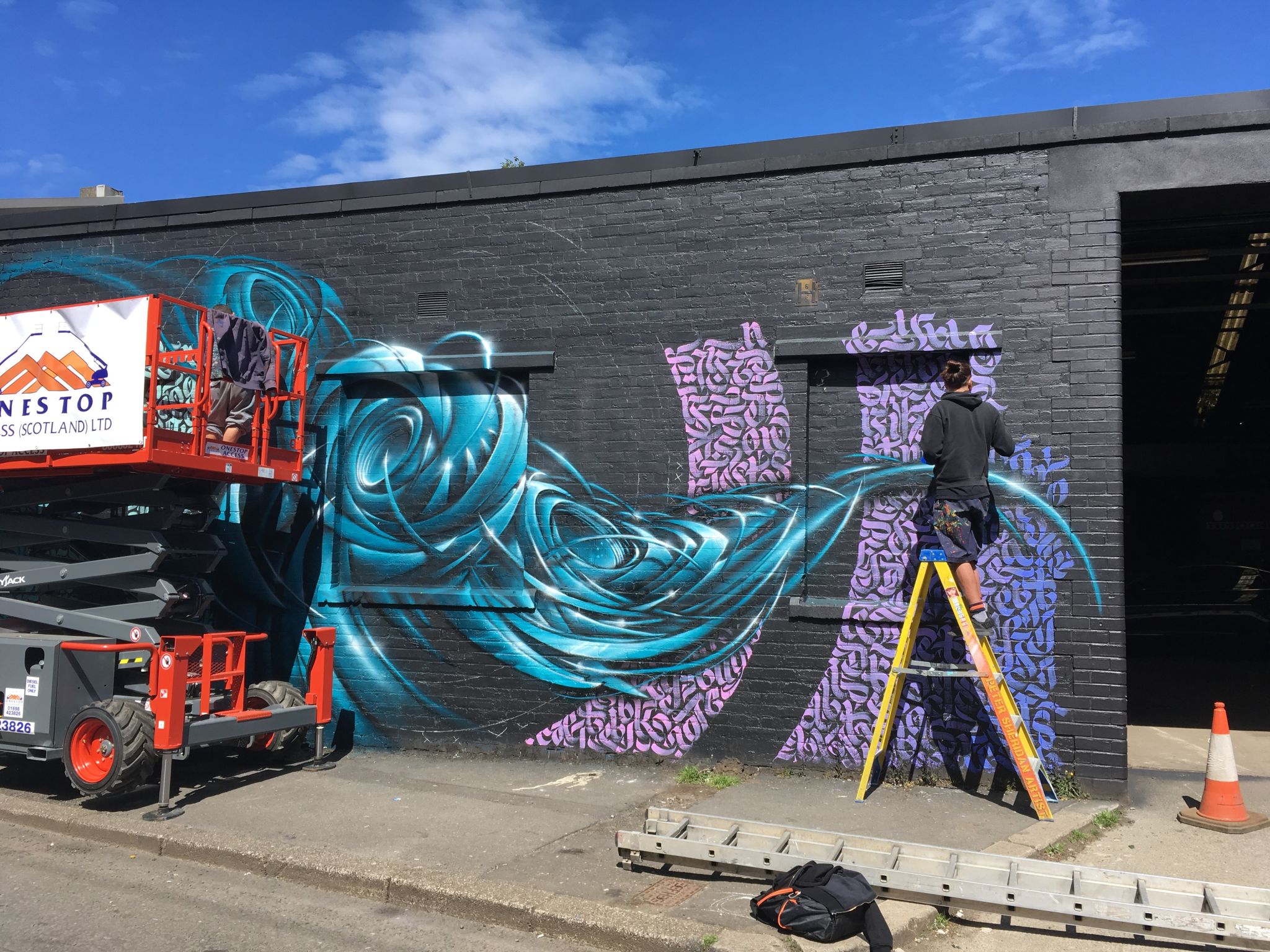 Graffiti on an overwhelming scale.

Cherry pickers provided to reach it! Factory walls and hoardings painted black as a base. And Artists from all over the world. Just look at this list.

Apparently known and famous names who were drawing in the crowds.

Did you know this branch of the art world existed on this scale?

I didnt. Knew of graffiti as vandalism, gang territory marking and protest. But hadn’t got much past a general hatred of the spray paint generation.

Did know though that Pompeii, and Maes Howe archeological sites had their own graffitti.  An art form with a long human history! Knew too that some of the Lascaux cave paintings were actually spray painted..by mouth. And I have certainly been beguiled by Banksy.

I had not realised though that its image has changed and today Graffiti is a recognised section of the Arts. New to me that  there were competitions, exhibitions, different genres and world renowned valued artists whose work people would pay £5 to see! Turning up in here in Glasgow in their thousands over two days!

A whole new world suddenly opened up.  Skill!  All done with just a spray can! 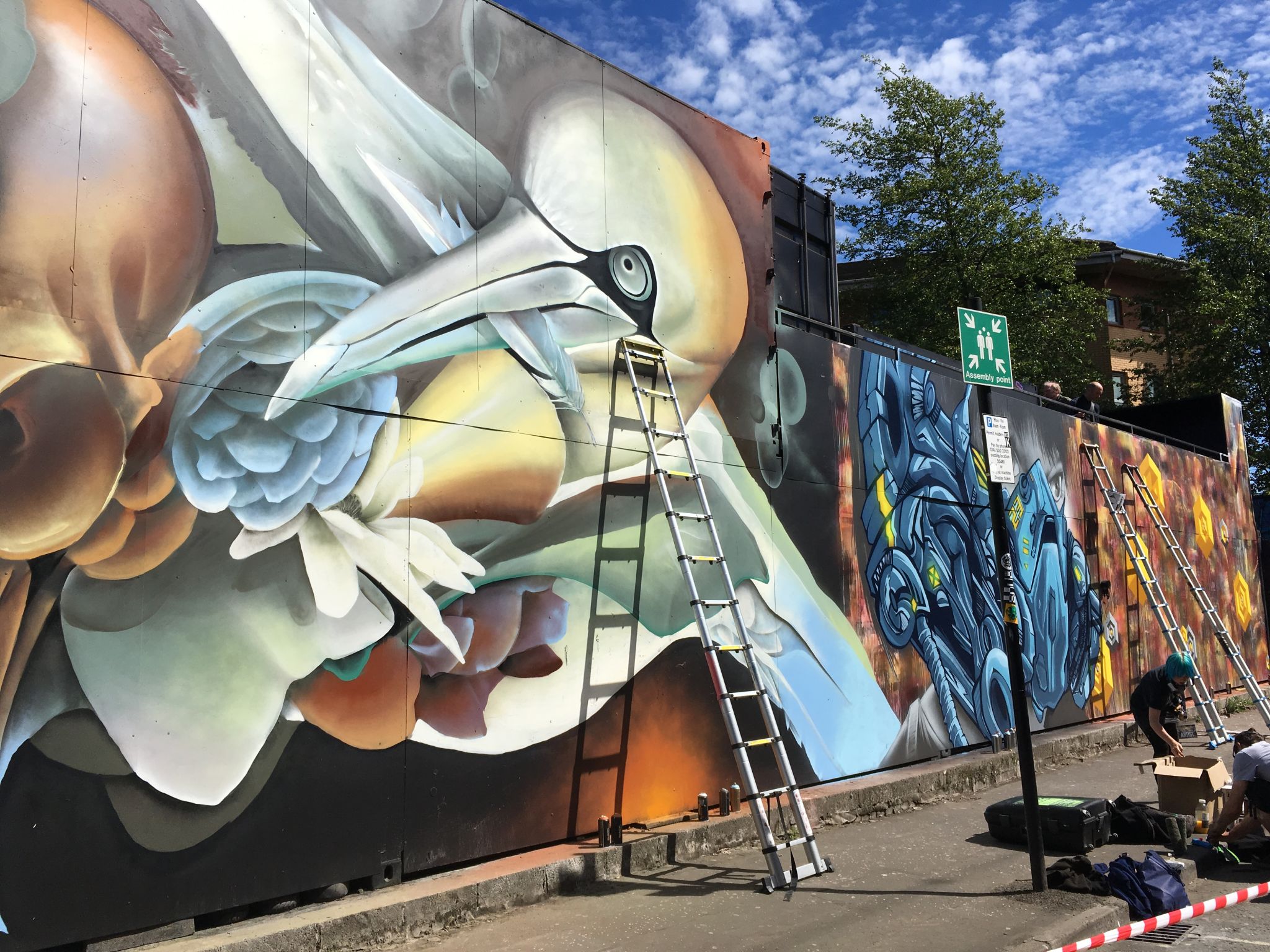 Talked to some of the artists about the techniques. Mostly depends on button pressure, distance away and speed of movement.

Apparently in the particular genre this exhibition focussed on the key aim was to produce 3D effects. And they certainly had…. 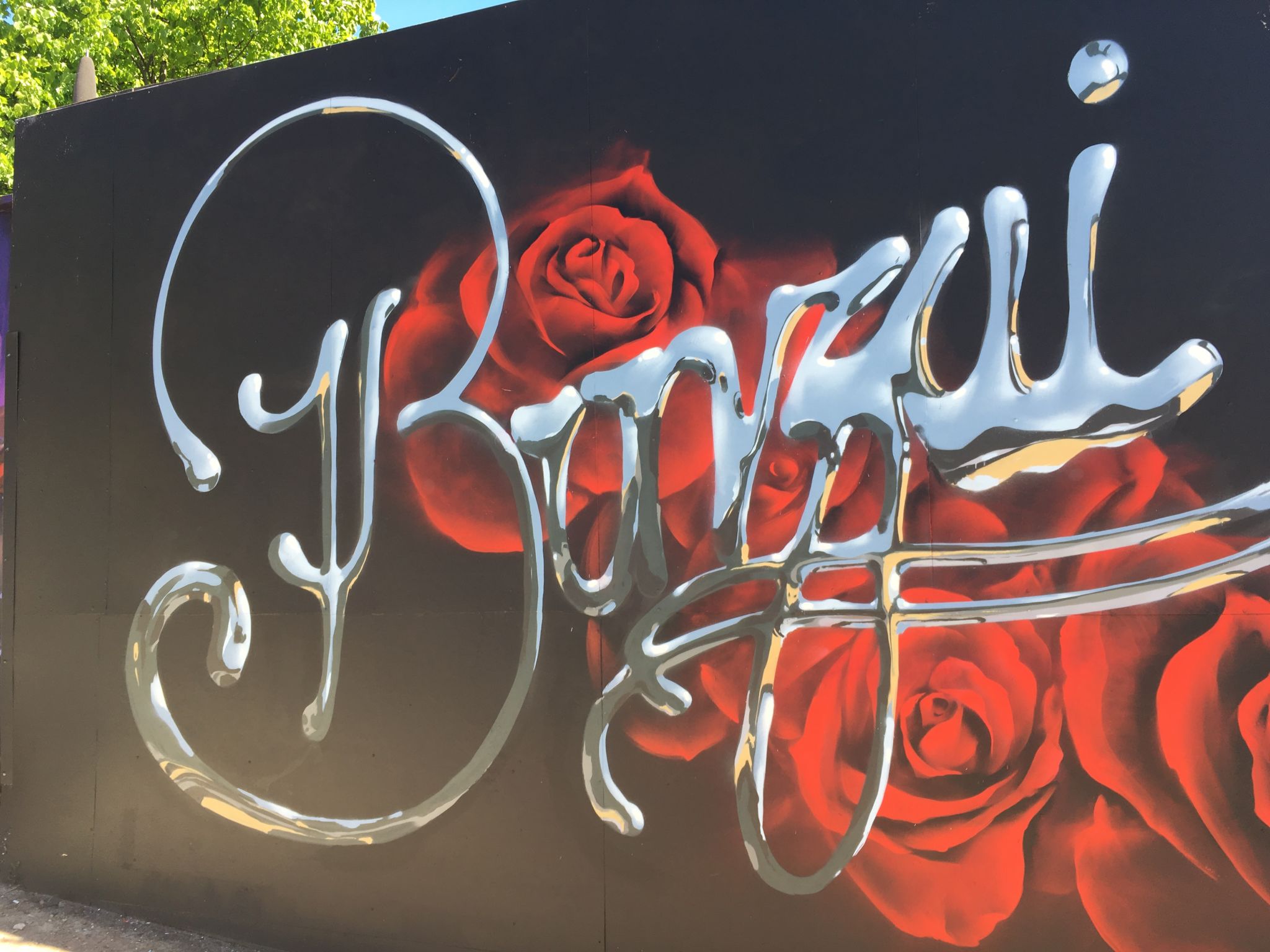 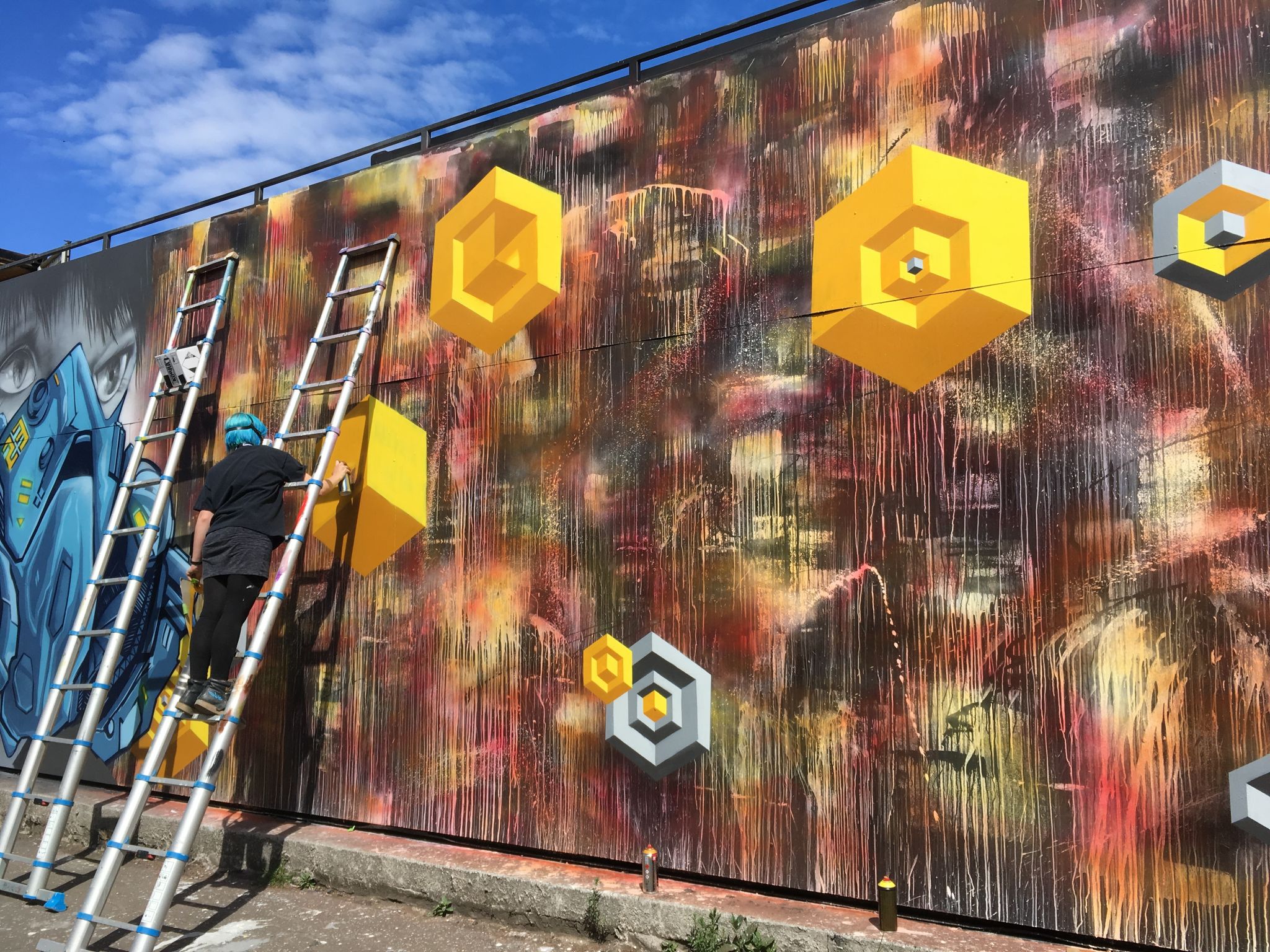 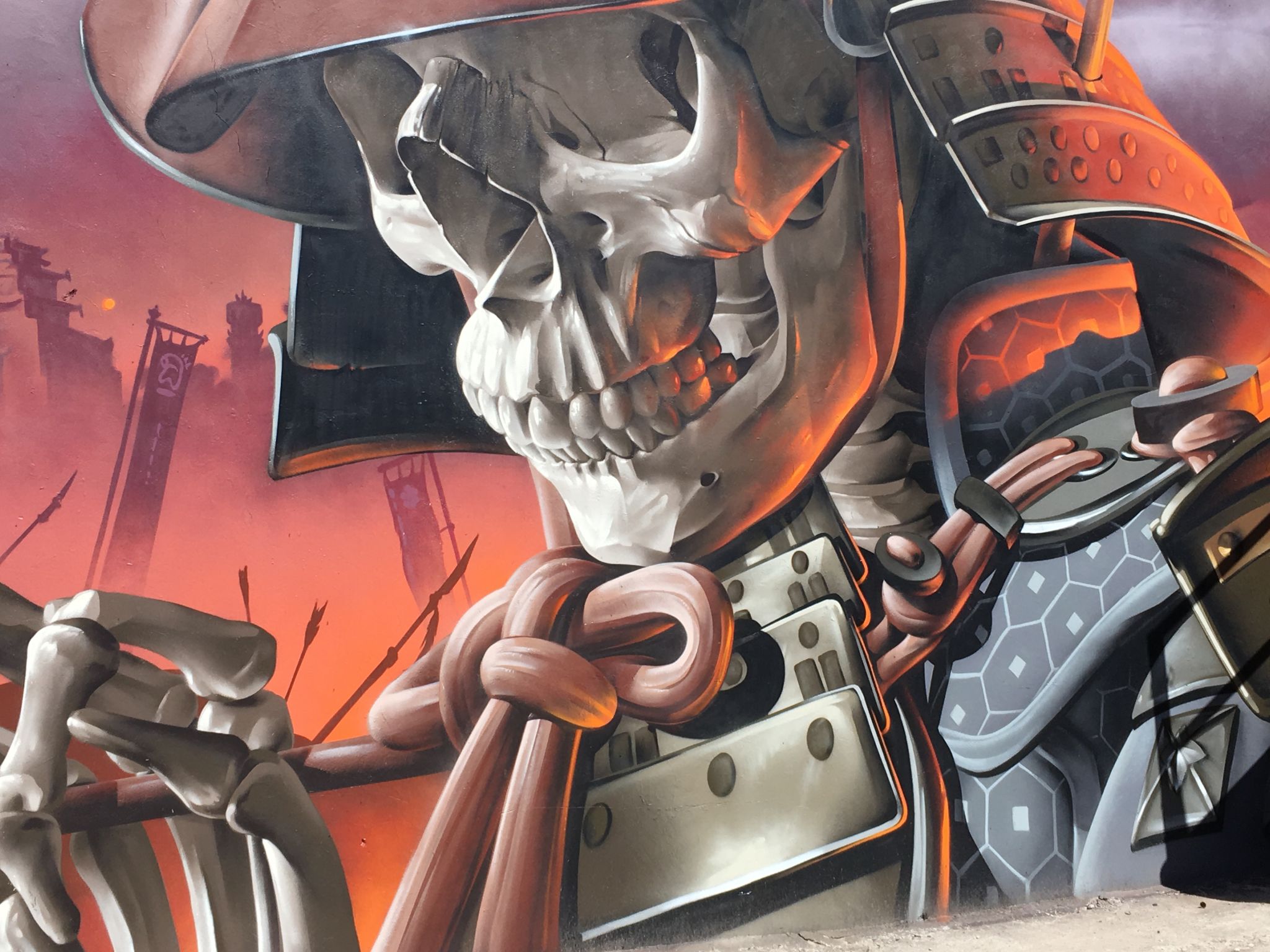 How do you do this with just cans of spray paint?  Watching the detail and depth emerge as they worked was seriously inspiring. This one was 20ft high!

The blue day helped, but the buzz of the crowds was magical. Children with parents, teens, and clearly aficionados and critics discussing works intensely. 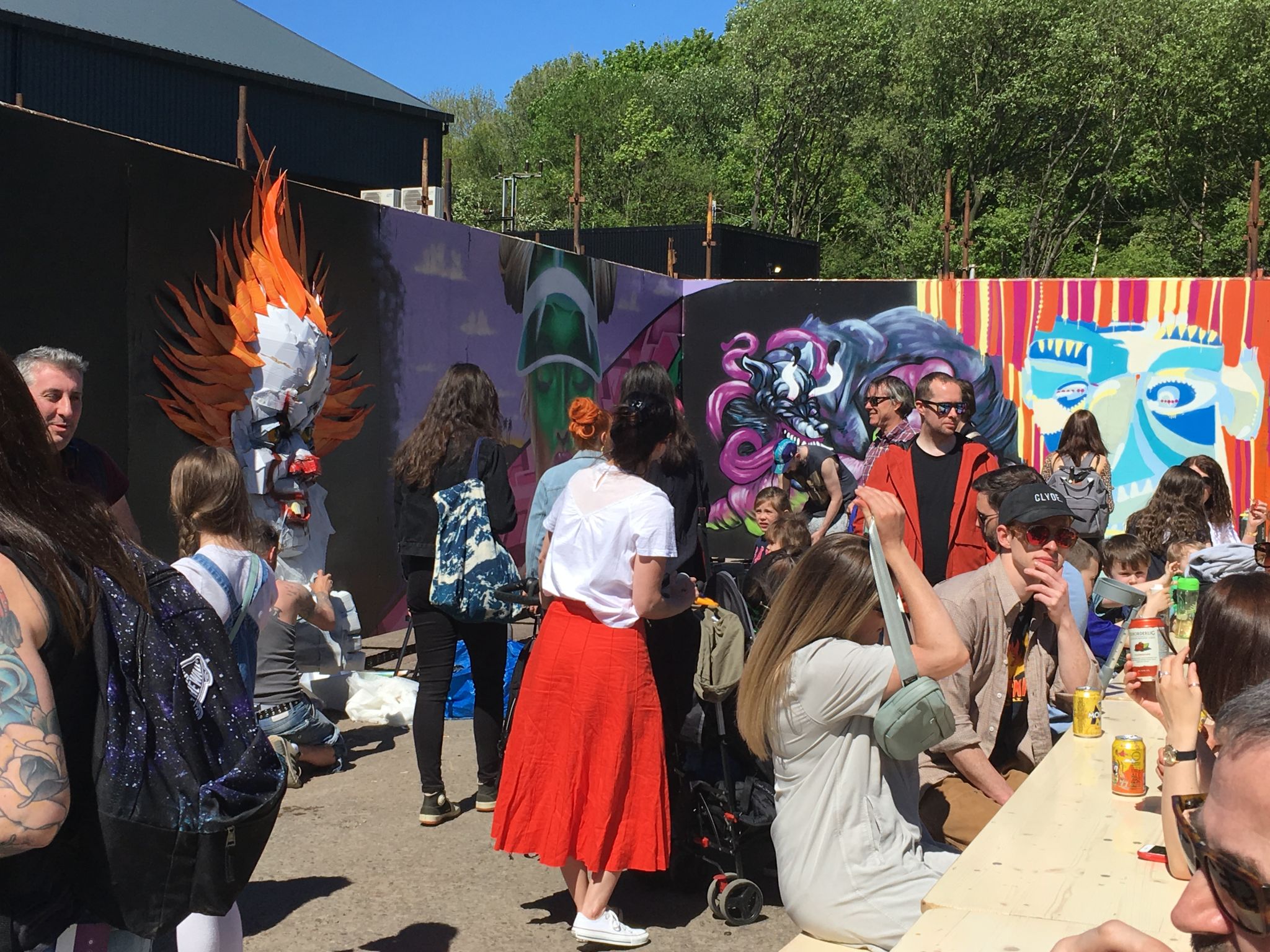 Loved it! Felt so lucky to be discovering and enjoying something new in my 84th year.

Chatted to the charming Events Manager for SWG3 who is known by all as ‘Gaz.

And  of course got on to my favourite topic, ‘Rebranding”.  In his case, Graffiti, in my case  “ Old Age”.

Then it happened. Mutual inspiration.

Might well be the perfect Event for launching our new campaign to change the stereotype of Later Years. (Watch this space for that. Coming soon)

Going with Grandad to his  Graffiti Class?