This Blog was originally posted on the International Longevity Centre UK site.  It was written to link with their Lecture/Debate Event “Reimagining Ageing”

We have a problem. All of us.

The problem is that in our society we have internalised a negative view of ageing. 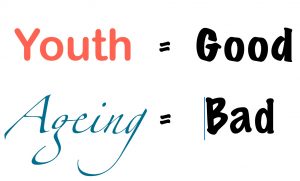 This negative image of old age is inappropriate for ageing in today’s world.

Not only is it unhelpful, it is actually harmful.

The UK has 11.9 m  people over 65 who have to  live with this view of who they are.  A further 12m in their middle years are moving towards it.  They fear it. Businesses promote that fear for profit. Employers unthinkingly discriminate on the basis of it.

A stream of stories on the problems of ageing emerge from the media. The NHS and the Age related charities need to highlight these issues too.  And so add to it.

We hear and absorb the bad news. It is no ones role to counteract it. No one corrects when facts are slanted or ignored.  Myths about age continue to circulate.  In spite of the rapid and powerful improvements in the health, longevity and life quality of older people over the last few decades, little of this good news is published.

A negative view of old age, whether held by others, or by ourselves, is harmful. It affects health, mental and physical, social wellbeing, and the extent to which we enjoy life.

It affects employment opportunities. And certainly underlies many of the problems facing the NHS and Social Services.

Retail markets and business too are not yet seeing past the stereotype and are failing to use a potential new market/ resource effectively.

The current image of old age is now seriously distorted. It is wrong.  We have created a large active, busy valuable mature group of people with skills and know how. Very many of them are living these new bonus years with high levels of happiness and life satisfaction. They are virtually invisible.

Problems occur with ageing, but most are sortable. New hips and knees and they are off skiing and dancing again. Much of the deterioration associated with age is avoidable. Yet the majority of younger people see old age as a steep downhill path.

The myth that old age involves a steady decline needs to be dispelled.

It is not, until frailty kicks in. That is the point where deterioration is clinically inevitable, and where the serious downhill begins. Increasingly that is only in the very last year or so of a life. All the evidence is showing that a positive attitude is associated with improved physical and mental health and that even frailty can be delayed.

Distorted facts need correction. For example the majority of young people associate age with Alzheimer’s, yet the actuality is that only 7% of people over 65 have that problem. And that  the level of happiness in ones 70s is higher than at any other stage of life is not commonly recognised!

Time now for a public change in the view of old age.  It is urgent.

We need to create an accurate Positive image, one that dispels the myths and scaremongering.

We need a major PR campaign.

But there is a  problem. As yet, no one has the responsibility, the funding or even a strategy for taking on that role.  It is up to individuals and small groups. The larger age related charities cannot easily do it.  Their task is to highlight problems, find solutions and raise funds for that purpose.

Though there is hope. Reimagining Ageing is certainly the future.

This is so particularly in relation to the workforce. A recent report  by selected MPs gives hope that parliament may take some action in that direction.

However the  key targets remain:

The creation of a new positive vision of ageing amongst the general public, particularly those in their middle years.

Encouragement of  Age Pride and Pride in Ageing at all stages of life.

It needs to become the next trend!

At the International Longevity Centre U.K. meeting in December, I shall be presenting a marketing strategy that can be used to promote a needed new fresh image of later years. It will show techniques of reaching the general public and the other 7 target groups we need to reach who too, unwittingly, have internalised the current negative view.

Who blogs on the positive aspects of ageing as Grandmawilliams.com

And has recently launched the “Negative to Positive’ campaign above under the Twitter hashtag #AgePride.