The Buzzzzzzz……That moment when your heart races, your eyes light up and the secret glee, that you, or your team, have won?

Dependent upon the occasion, you jump up and down, throw champagne around and scream, or smile quietly and say how lucky you were.

Something warm runs through your veins. Love it!

A regular adrenaline rush is probably part of a healthy human life. We seek it don’t we?

But how do you get that buzz when you are old, no longer in the thrust of life?

Walking down a side street Some years ago,I was amazed to see it filling up with coaches. From them poured streams of old ladies! Sticks, wheelchairs, walking frames all in there, jostling and chuckling, but intent on getting to the big open door, a Bingo Club.

It was one of those moments. At work as a Physio I was seeing hundreds of old ladies, sad,  low, depressed. But these! These were happy excited people with anticipatory grins on their faces.
It may have been the point at which I realised I had not yet understood old age. I certainly realised that I had misjudged Bingo.

What was this magic medicine? Curiosity won again. We had to go in.

Had to be a member to play, but you didnt need to play to see the atmosphere.  And I mean see!

Meeting, greeting, waving and eventually seating. Waves of laughter at the sallies of the Bingo caller ….what a skilled job! Then tension, heads down, concentration, it turned into an exam hall! Some grey wizards doing two or three cards at once….. 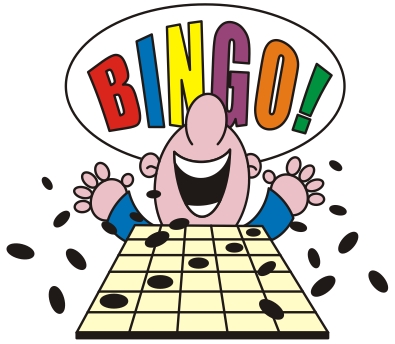 Excitement, disappointment, congratulations…have another cuppa, and off we go again. Living!

Nothing new! To my delight recently reading, a novel by the Victorian novelist Anthony Trollope, I discovered that he had made exactly the same observation 160 years ago!

One of his characters a  clergyman was pontificating on the iniquity of old ladies having parties and playing cards..for money!

Trollope, in reply, writes this delightful sketch* of such a party:

“It is generally thought that a sad ennui pervades the life of most of those old ladies in England to whom fate has denied the usual cares and burdens of the world, or whose cares and burdens are done and gone. But there was no ennui here. No stockjobber on ‘Change could go about his exciting work with more animating eagerness. There were those who scolded, and those who were scolded. Those who sat silent, being great of mind, and those who, being weak, could not restrain their notes of triumph or their notes of woe; but they were all of them as animated and intense as a tiger springing at its prey. Watch the gleam of joy that lights up the half-dead, sallow countenance of old Mrs. Shortpointz as she finds the ace of trumps at the back of her hand, the very last card. Happy, happy Mrs. Shortpointz! Watch the triumph which illumines even the painted cheeks and half-hidden wrinkles of Lady Longspade as she brings in at the end of the hand three winning little clubs, and sees kings and queens fall impotent at their call. Triumphant…”

He would have loved that Bingo Hall.

Why am I writing this?

Because we have recently had the announcement of a Minister for Loneliness…..It sounded so sad, kindly meant, but so pathetic.  Can’t help but wonder if the very title doesnt make things worse!

Yes, for those old people who live alone, cant get out, no family and few friends there is a problem.   They are bored.   Am I allowed to say that?    Yes!  You can occupy time, read, watch TV, get a kick from crosswords, watching Sport  or Strictly but the big gap, the missing element, is the lift from ‘excitement  shared with others.”

You need someone to share that raised adrenaline with!  Doing emotion type things with others, even gossiping  and arguing are known to be fundamental in all human societies.

I was intrigued by the reports on the new film The Greatest Showman. The critics weren’t having it, decidedly snooty they were, but the Sing Along version has turned out to be a huge success. The public loved the involvement…interactive cinema. The box office was shocked .

Not at all surprising really. Maybe it too is in part that sense of group excitement we all seek. Our Bowls team? Our Bridge gang? The argument at our Book Club? Or whatever we are sharing with joy? And which, to my surprise, I have also discovered via the social media.

But someone was there before me! This marvellous lady is a world famous for her ability to play Skyrim (or  Skirrim) the On line battle adventure game.

Now there is an idea! On line Gaming for Oldies – the next big thing!

Adrenaline: challenge, activity, people and shared fun….the best antidote to depression, the pick me up, the buzz in life at any age.

Shouldnt we have an NHS prescription for:

A weekly coach trip to Bingo? A day at the races? Sing along night at the local? Football fan club? Fishing matches? Chess in the park. A day at Blackpool Fun House? A week at an old fashioned Butlins? Now that would be rehabilitation….

Alternatively could your home be the place for the buzz?  If you have 4 chairs and a table you could create your own little fun palace!

Ask people in for pop up games groups, chess,dominos,  bridge, bingo? Crossword or a jigsaw club?  Surprising buzz from doing jigsaws together!

Have Your Teams’s fans join you to watch the match in supporters gear.  Have a Wimbledon, Strictly or Bake off teaparty. How about a  Social media for beginners group with a teenager/teacher popping in? Maybe ask if Local clubs would be interested in doing outreach? New people, new friends, fresh excitement..

If you watched that TV programme about older people in residential home interacting with Nursery School children, you will know just how powerful buzz is.

Living is about being part of a group, about getting interested and excited together. And  the pleasure of it doesnt stop in later years. If anything it is better!

Is there any chance we could have a re name:

The Minister for Excitement?

*Excerpt From: Trollope, Anthony. “The Bertrams.” iBooks.
This material may be protected by copyright.