Blue blue sky, no wind and frost on trees.Must go out.

Where? Out and up, towards the Campsie Fells north of Glasgow.  Too icy to walk much, but just go and see.

Curiosity. The best life gift I have ever been given.

It came from my Mother. We lived in a mining village, no car , no cash. But Mum, who hated house work, would search out a few pence and say lets go somewhere. And off we went. The first bus to anywhere and “Let’s see what’s interesting there” 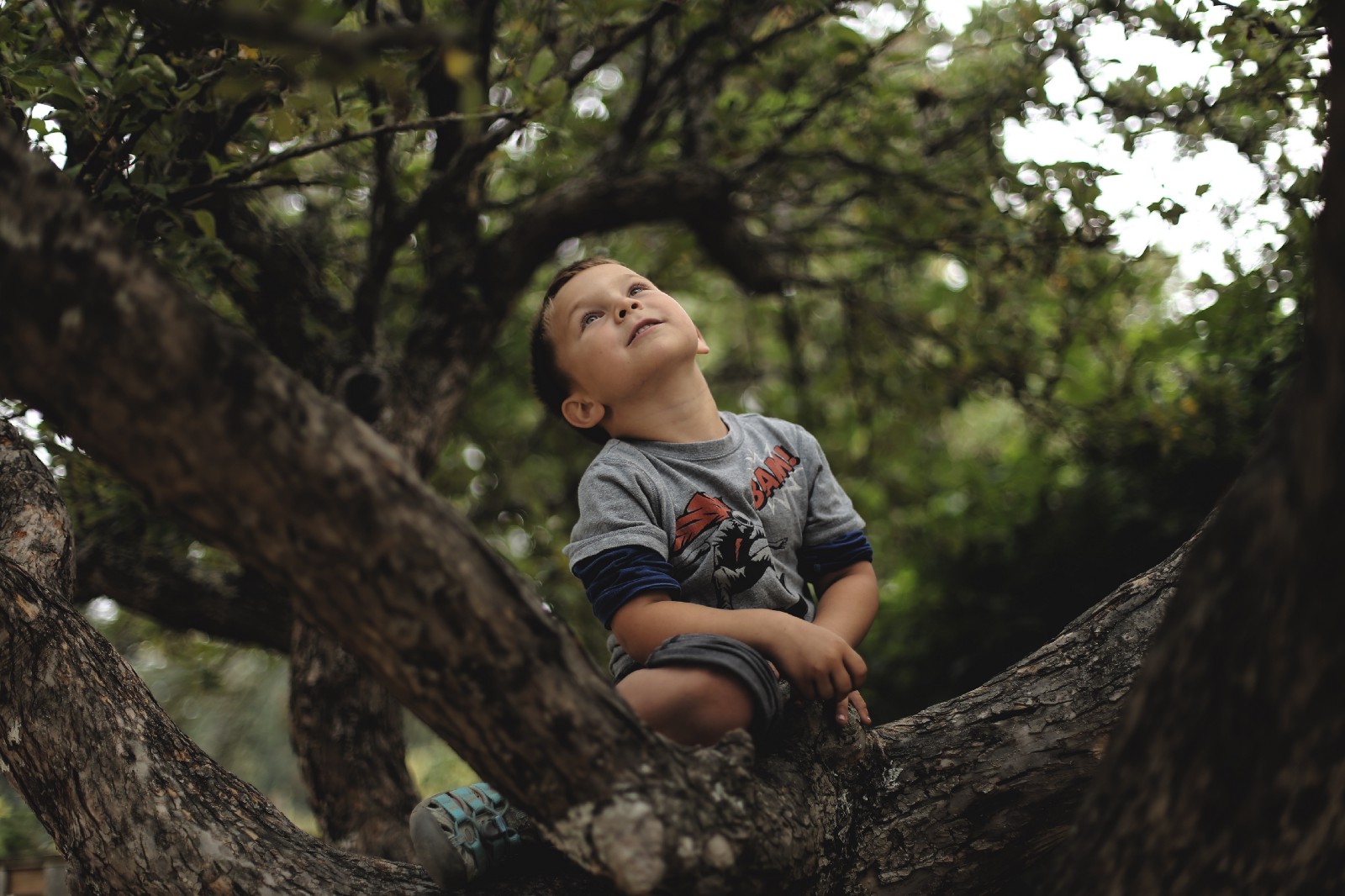 Pretty good life motto. We loved it, because there always was something!

This outing was exactly that. Except now there was a car.

It turned out that on this trip, the something was a someone. George Buchanan.  No I had never heard of him either.

The trees were magical. All sprinkled with hoar frost. The fog was just clearing and the sun sparkled on the trees. Entrancing. 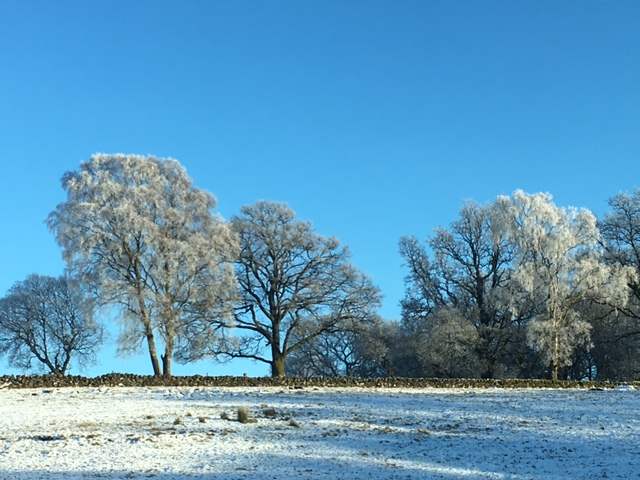 No particular aim. It became a wander in wonderland. Just looking.

This is the challenging little hill DumGoyne peering over a hedge showing us what the tops were like.  Visible for miles it is a volcanic plug. Great for testing your fitness….but not today.

Lunch called, the charming little village of Killearn was there, and it has the perfect pub, The Old Mill.

Look at this.  Warmth to perfection.

A glowing open fire on the coldest of days. And superb Cullen Skink*. What else could one want?

But after lunch exploring the village produced this!

What on earth?  Over 100 feet tall! Not as I first thought it might be, the village War memorial. That was across the road.

There were railings, a gate and snowdrops. 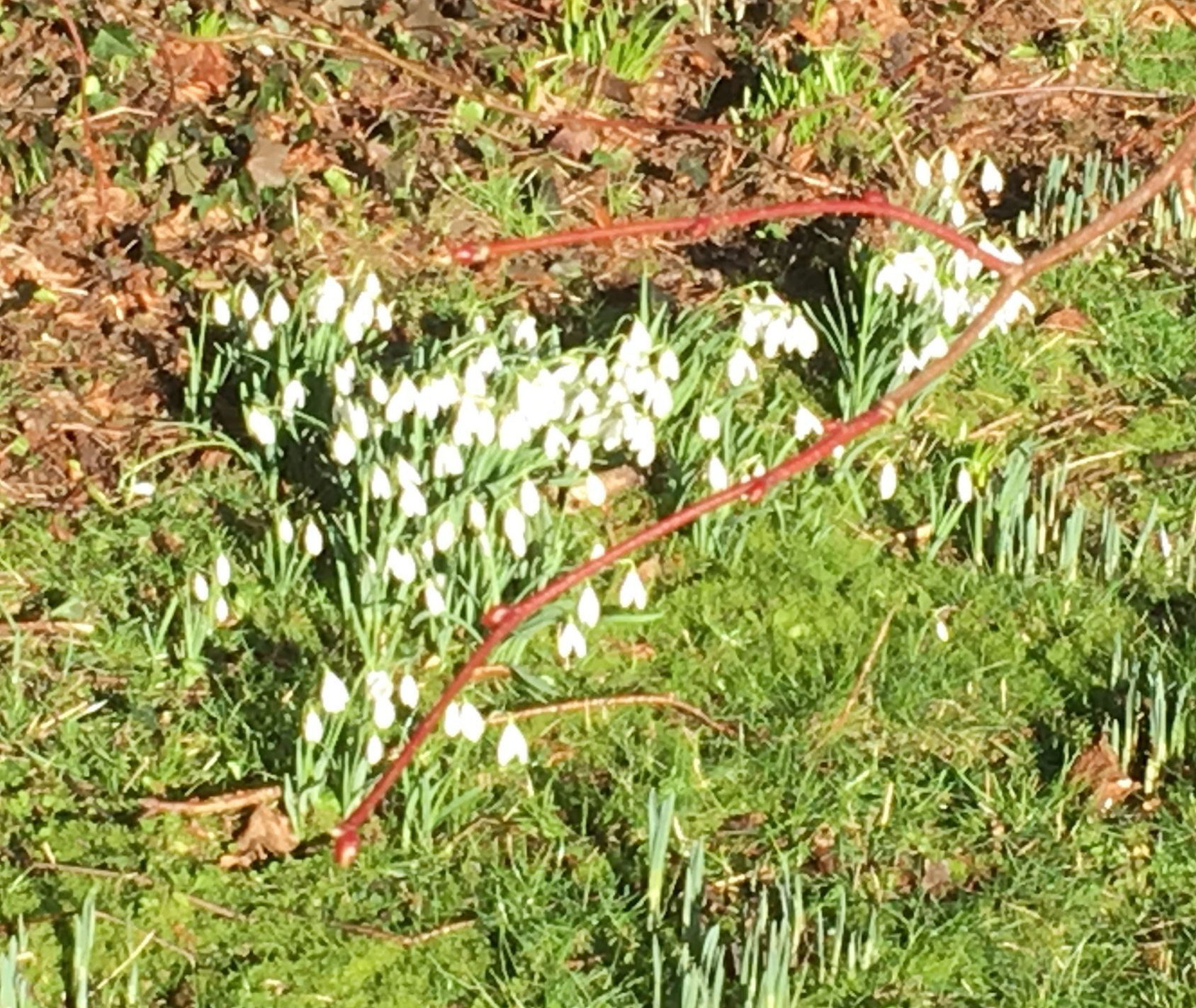 And there in large letters was the name. “George Buchanan”

At the side was a notice board. This is what it said: 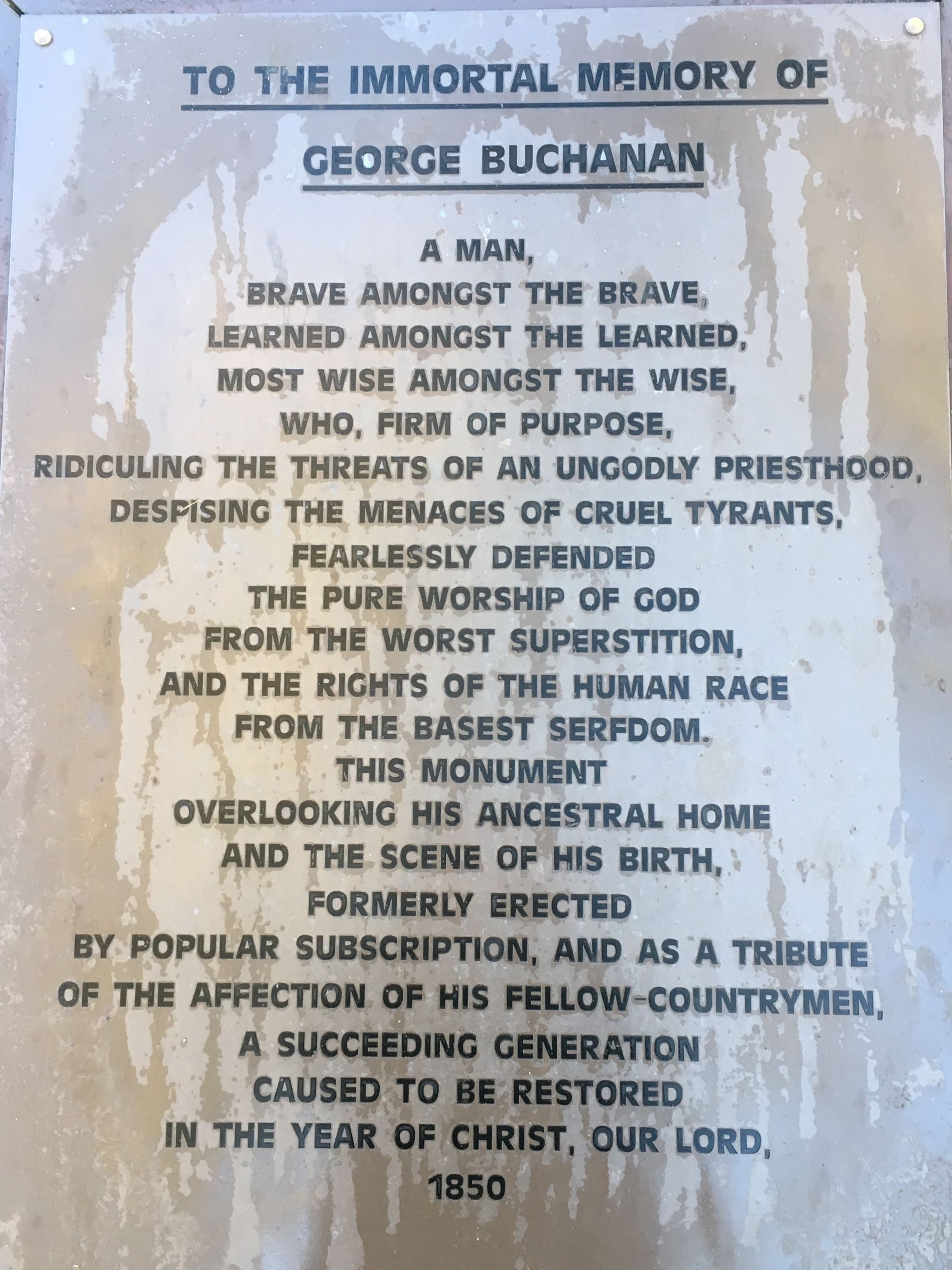 What wonderful language! Conjures up scenes of bitter wrangling, certainly a battle of words. Not apparently a martyr, but obviously someone highly admired, respected and beloved. This  huge monument went up in his birthplace almost 350 years after he was born!  But who was he? What made him this important? No idea.

Back home to Google.  One of the delights of a Curiosty Wander.

Always some thing more to chase up. Can go on for days!

Found him in Wikipedia.  He seems to have been a famous historian, a humanist, a Reformation scholar, a writer with huge influence. He held professorships in both Europe and Scotland. Look him up. Amazing career

But look at his dates?  1506 – 1587 Bells ringing?  Elizabethan era? And if you  saw the film, Mary Queen of Scots, that era. When she came back to Scotland he  became her tutor.  A new country, a new Queen, a lot to learn in a hurry! Though it was in the family. He had also tutored one of her many half brothers – the illegitimate sons of James Vth, her Father. The one in the film, was Moray who had acted as Regent.

Buchanan himself wasn’t put into the film, but if you read his Wikipedia entry ( you really should)  you will see where he fitted.

Reading it paints  in a rich, colourful, even exhausting, picture of that period.  So much international travel….by sailing ships and horseback. So enjoyed meeting him.

Just love the way a simple wander ends up finding connections like this!  Saw the film on Tuesday. Found the monument next day.

The richness of life when you wander with Curiosity!

You may also enjoy: