A Wedding Anniversary treat, booked ourselves into a high quality hotel. The de luxe room was promised and we were set for two blue sky days in the most charming of Yorkshire’s small towns in one of the best preserved of the beautiful of Dales.

Let’s ignore the lack of a lift and the room being on the third floor. It was a very old building. “ You have the DeLuxe room!” said the enthusiastic receptionist proudly opening the door. ‘Look”.

And there it was:  the de luxe bath in an alcove….. 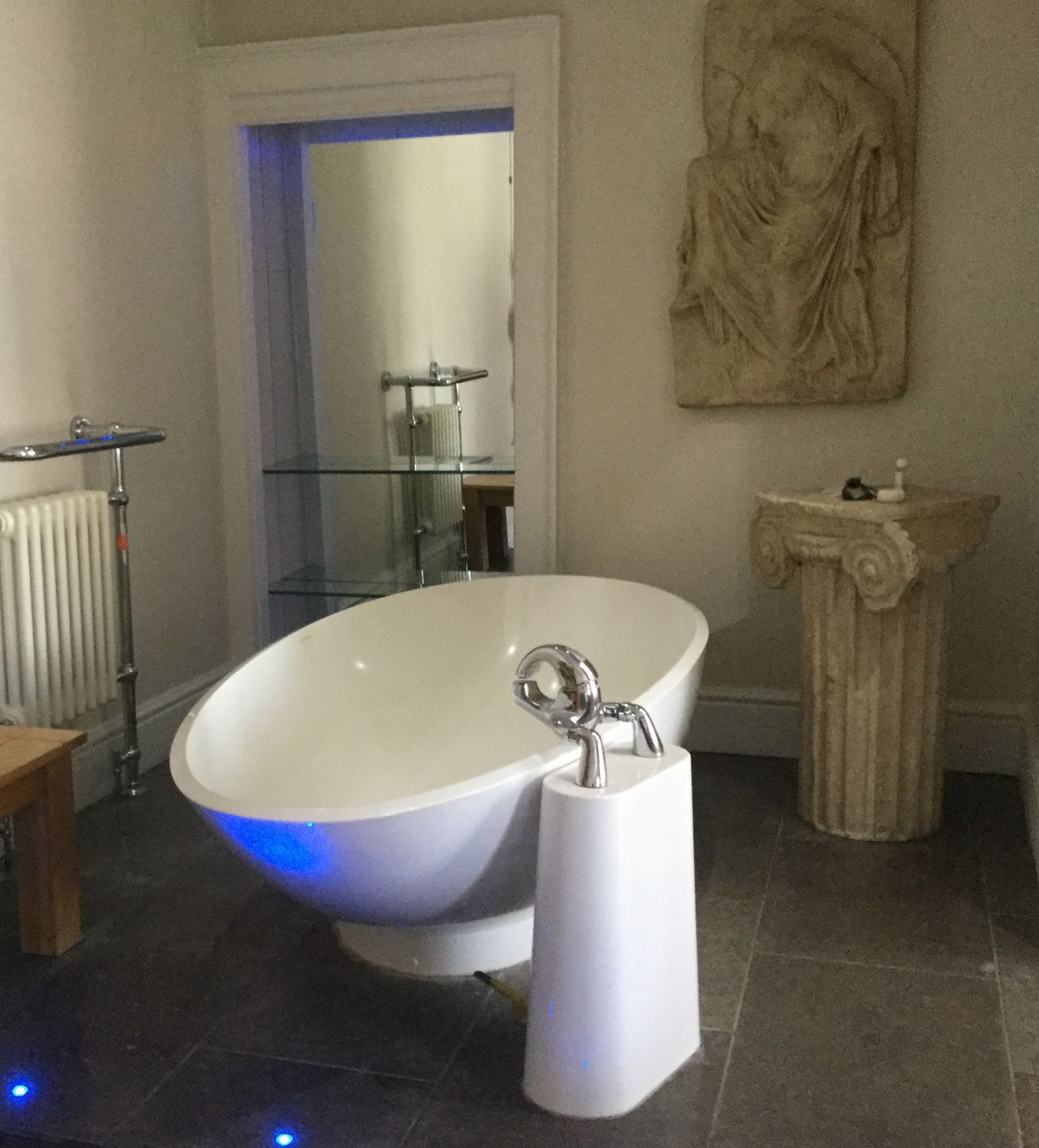 Someone had designed it with love, perhaps with love in mind?  Perfect for a wedding anniversary? Not quite, not when you are 80+.

We tried to hide our giggles as she showed us the features …the blue lights, the warm mirror(?) the foam bath…Had to try it though didnt we?  One of us volunteered. Not me. (Misses the point a bit?)

First problem: where was the bath plug? Not in the bath. Nor did there seem to be one of those little levers on that steering column to the right. Ah, yes, sharp eyes spotted it.  Nowhere near the rest of  the elegant elaborate tap, but on the floor, under the bath.

Can you see it? Looks rather like a left over bit of a plumbers tool kit and and created a second problem ..How to reach it? 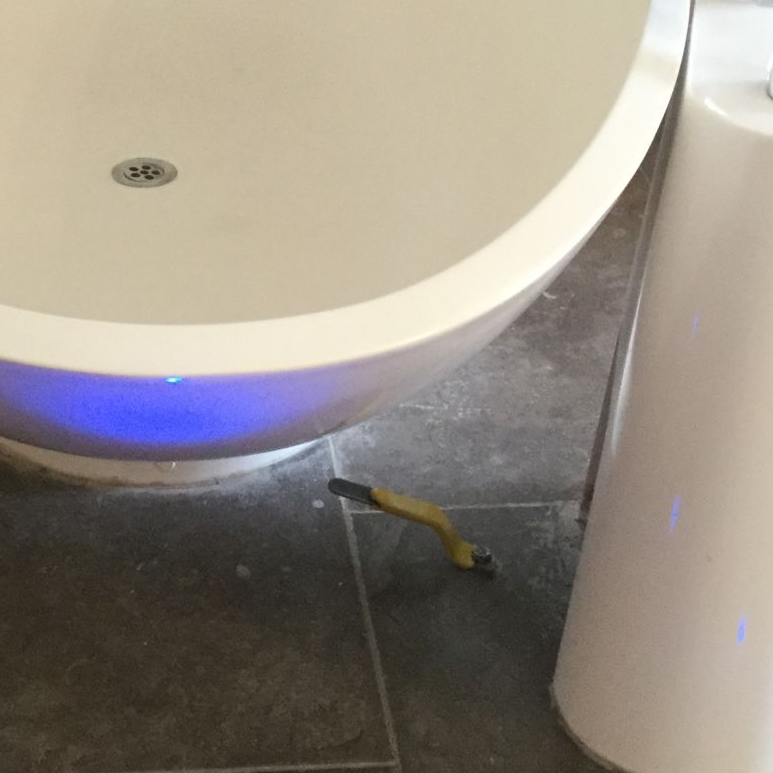 ….tried kicking it, but failed so had to attempt to get rusty knees down to that level.

Naked on hands and knees crawling under a bath at 80+…..Couldn’t move it.  Began to seem a little ludicrous…for romance. Had to ask the kind friendly girl again

Now to get in.  No handles, totally curved  slippery surface….swoosh!

No way to actually sit up, nothing to stabilise feet…just, swoosh once more. Maybe it works better with two?  Getting out was inevitably in the beached whale style: slither, half upright, try the roll onto knees, fail, try harder, make it up then a sudden lurch for the towel rail to stabilise as the feet are away again. ( I have the video! )

Do the designers of these things ever try them out? Have the hoteliers ever used them?  It seems highly unlikely that they ever thought of anyone over 70 wanting to enjoy  a romantic bath, safely and easily.

Yet, interestingly, everyone in the dining room for breakfast looked to be in the retirement category.

Rather annoying though to pay for a bath you are unable to use. However there was a shower, large enough for two. 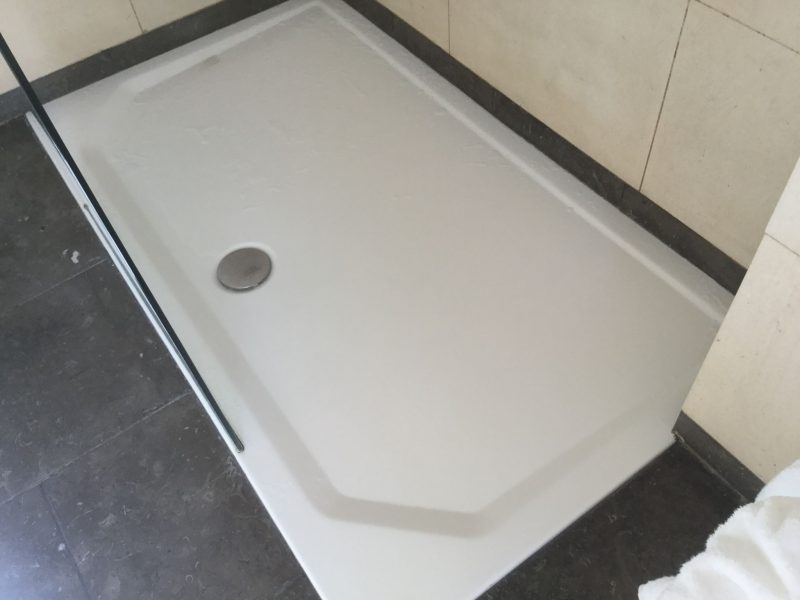 Fourth problem, a totally shiny slippery floor. 🤭☠️👎🏼.  Though give credit, there was a grab bar and the tap bit was safely away from the rain shower head. Not the usual issue of getting scalded or frozen whilst trying to read the controls without glasses. And there  was a ‘stick to the floor’ bath mat provided. Very pleased to see that.

Yes, but it was only half the size of the shower base. So if you stand on the bath mat to adjust the temperature ….you have to step out, grovel to unstick it,, and then restick it under an already running shower…. 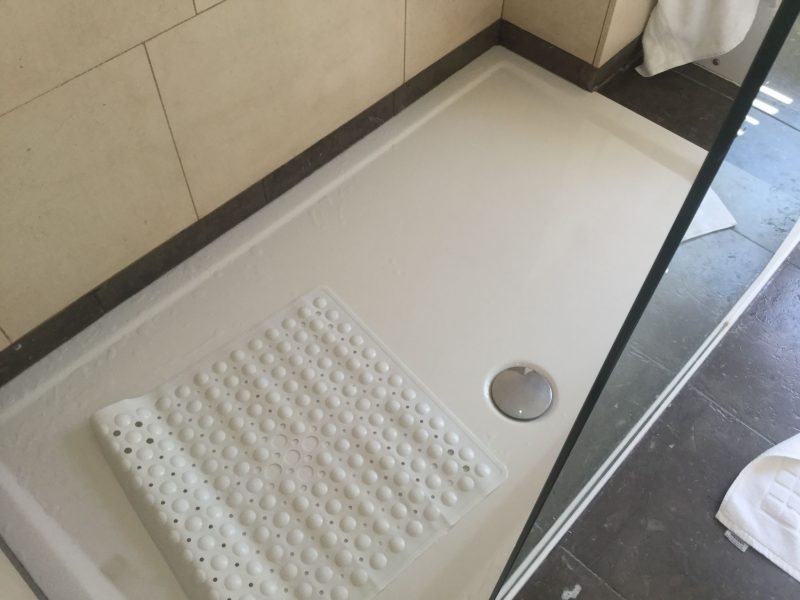 And anyway it wasnt big enough for two, so that bit of the agenda was abandoned too.  Though the bed was fine: seven foot wide I think, beautifully soft. No complaints about that nor about the excellent dinner with candles.

I suppose I am not really complaining.  We were treated very well. Someone had truly enjoyed designing their dream room for guests.

It is just that once again the term Unthinking Ageism comes to mind.

That inability to imagine an old couple both wanting and trying to use the facilities you are creating. And not fully realising the danger of installing showers with slippery bases.?  Why are they even on the market!  It ought to be of prime concern to both hotel owners and manufacturers. Why isnt it?

We do need to ask if it is acceptable to supply and charge for a bath that a growing percentage of the population will find difficult if not impossible to use safely? Couldn’t designers think it through?   Elegant, sexy, fun, but accessible to the majority of us? Maybe put an Age Friendly mark on them?

In the end a lovely evening, much hilarity, ridiculous embarrassment and an excellent bottle of Fleurie.

Probably the appropriate mix for a wedding anniversary at 80+?