Read a lovely blog recently which talked about ‘our elders and how they should be given respect by us.”

In a similar  piece a little while ago, a National newspaper thoughtfully addressed it’s readers on the subject of ‘our fear of ageing’. 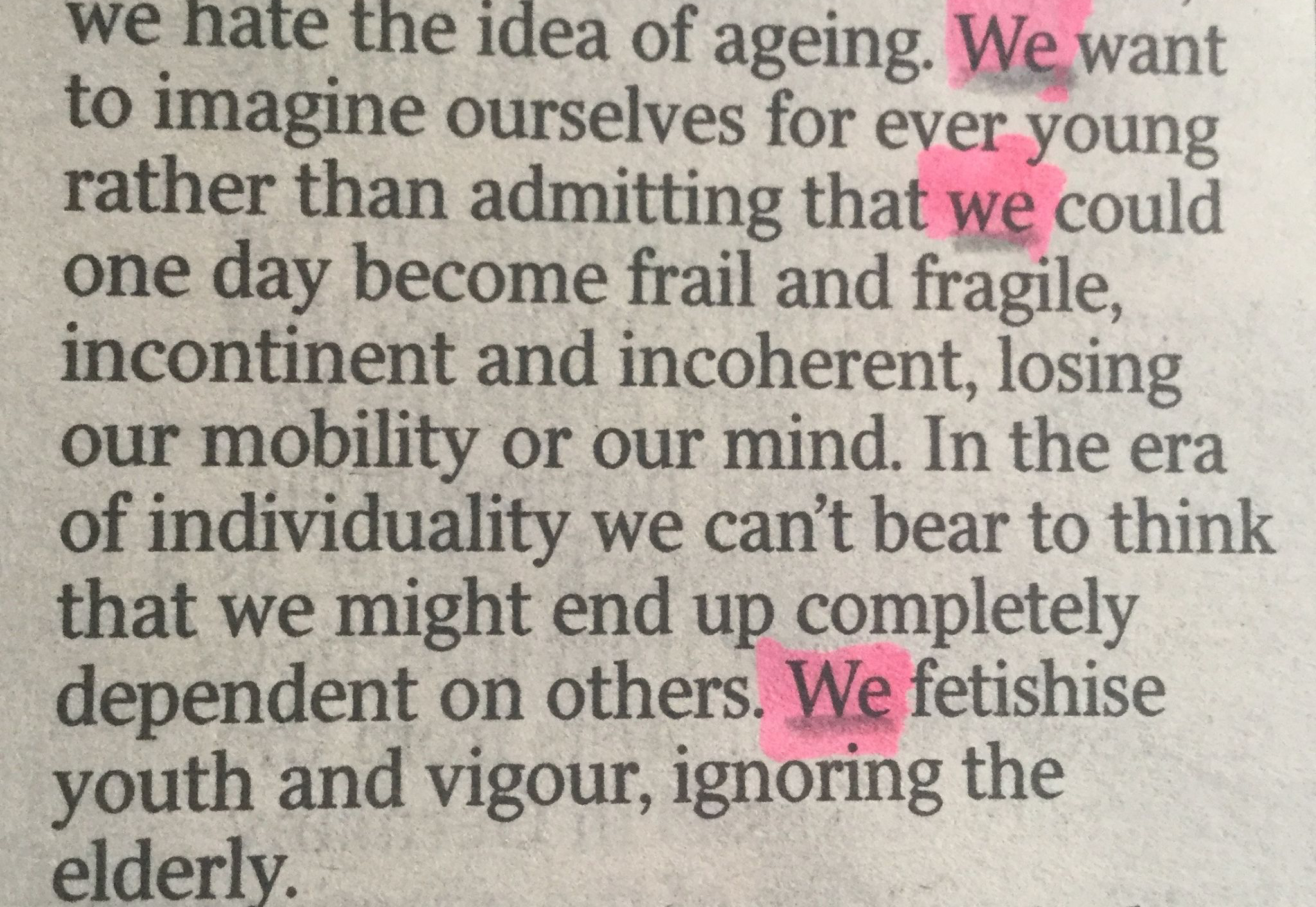 Wait a minute! What is going on here?

Allow me to put some bold and capitals in there. We, Us, Our….They!

Just who is this ‘We‘ these writers are talking to?  Being a very ancient reader, I began to wonder. Was I not supposed to read these things? Is this blog, this paper, only meant for “We” – the young? Do the writers  really not see me at 82 as ‘We, one of  us’?

Who are these creatures categorised as ‘They’ – older people?   Am I now some kind of ‘ Other‘?

Not sure I like either of those thoughts. Begin to feel rather uneasy.  Unthinking wording, kindly meant, yes, but that subtle unease continues…writing like this is demoralising and demeaning to its readers. And it is socially divisive in an unpleasant way.

Ask myself, “Does it matter? It is all being written with the best of intentions isn’t it?”  And I expect you are thinking ….lot of fuss about a few simple words. I wouldn’t blame you.

Can we try  an experiment?

Let’s try putting this piece  in a major paper.

“What shall  we do about the  Middle Years people?

The under 60s  are in trouble. Stress, working hours and life balance have become too difficult. That many of them are collapsing, finding the strain of living too much, is an increasing problem which we need to tackle.

Though Younger, middle years people appear very active to us, they often look terribly  haggard, fraught and strained in a scary sort of way. If they are to get  to the same level of happy serenity that we in our later years see as normal, they clearly need help.

Maybe there is a role for an organisation providing advice and mentoring for them? Certainly, they need us to find answers. We should be pushing the Government for the help they need.

Let’s go back to my original newspaper quote.

Was it accidental?  Did an editor not notice how patronising it was?   And was it seen as acceptable to allow a columnist to exclude people over 70 when addressing it’s readership?

Rather worrying isn’t?  Have the 30% + of us who now make up the ageing population become a different, invisible part of their customer base?  Is it Ok to patronise  a population group in this unthinking way? And even more worrying there have been recent instances of charities working for older people doing it!

And if it is being done unwittingly is that not of even more concern?  Doesn’t  it mean that someone unconsciously thinks of older people as ‘other’, as a group outside their own active world of ‘we’?

Did it not occur to the authors that, by using ‘we’, they were implying it was the case!

Did the writers , although speaking on behalf of the elderly,  not realise that by using such words, they themselves were actually being ageist!

Sadly, I suspect they didn’t.  The Trap caught them.

The Ageist Words Trap….What is that?

Simple. It is just the unthinking use of words which reveal an unwitting ageism: the concept that older people are “other ‘, different, not quite part of normal humanity. And it usually involves the word “we”being used to create an inclusive/exclusive view.

It might help to end with a good example of how to avoid the trap:

From an Age Friendly Greater Manchester policy document: a simple example of  the use of appropriate inclusive phrasing.

‘A portfolio of age-friendly good practice has been put together by Ambition for Ageing. It showcases the projects large and small that are breaking down barriers to make places more inclusive and accessible to us as we age, and which are making a positive difference to older people’s lives.