We didnt choose Renfrew. Like many of these walks, it just happened.

Magic walks usually start off by looking for a bit of, as yet unexplored, green on the map. There it was, a footpath along the River Clyde going west to where it meets the White Cart River path.

Never been there. Lets go.

The Knees were happy, it was flat, and Curiosity couldn’t wait, though not really expecting much. And given that it was very close to the huge shopping centre of Braehead it did seem doubtful.

Even more doubt when arriving at the start, in Renfrew itself. It didnt look impressive or green. 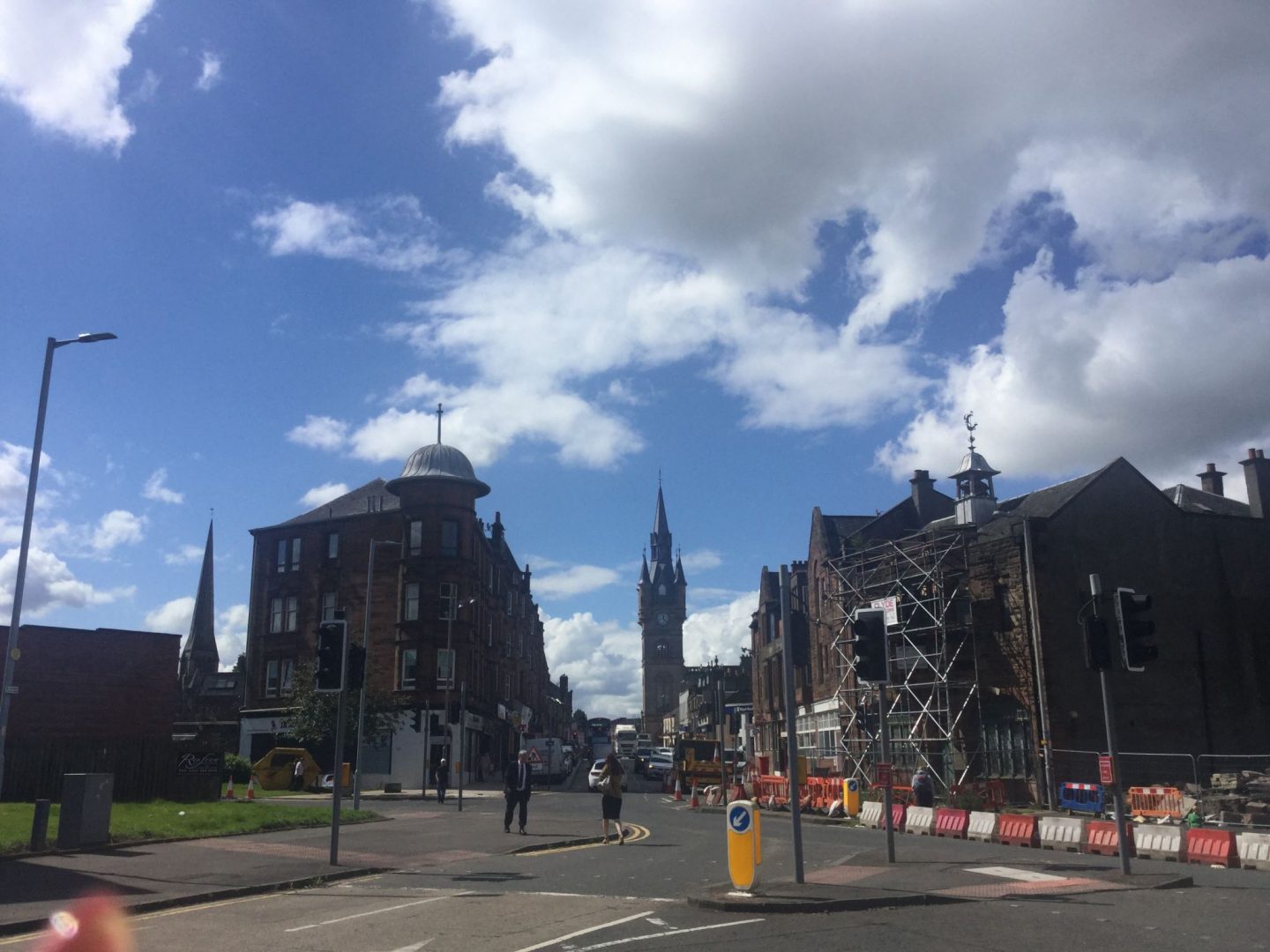 But wait! What is the strange tower and why does that building have a piece of Indian architecture on top? Curiosity was wide awake. 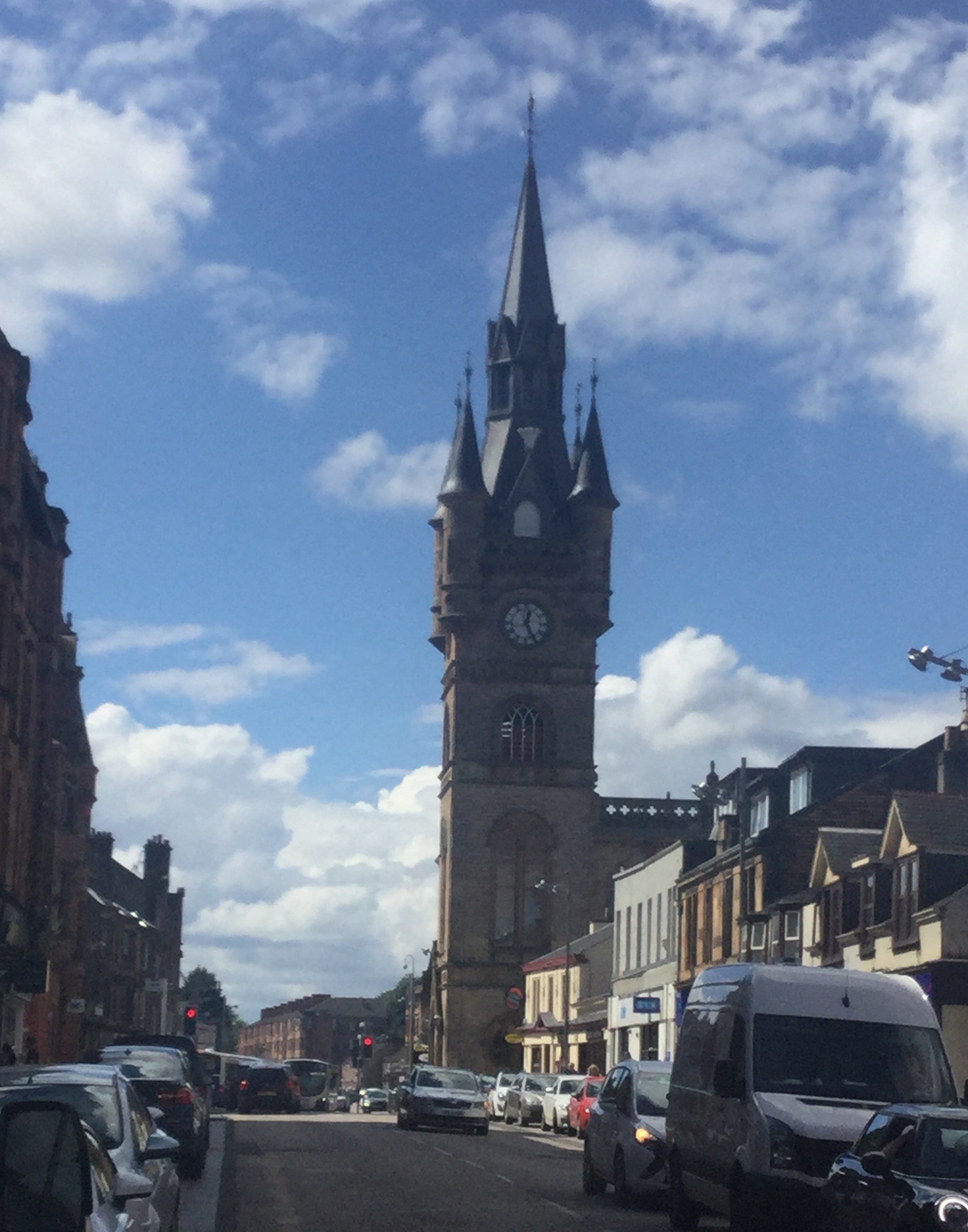 Wow!  Renfrew had built itself a magnificent Town Hall with a 105 ft spire. This was a place which had once had Money Money Money and Pride. What had happened?

The road we were on led toward the river. Thataway was the path.

But here are two more questions.

This one: it is not a crossing nor a speed bump?  The gentleman explained..it was a flood barrier, one which could rise up if the Clyde got overexcited. Who would have known? 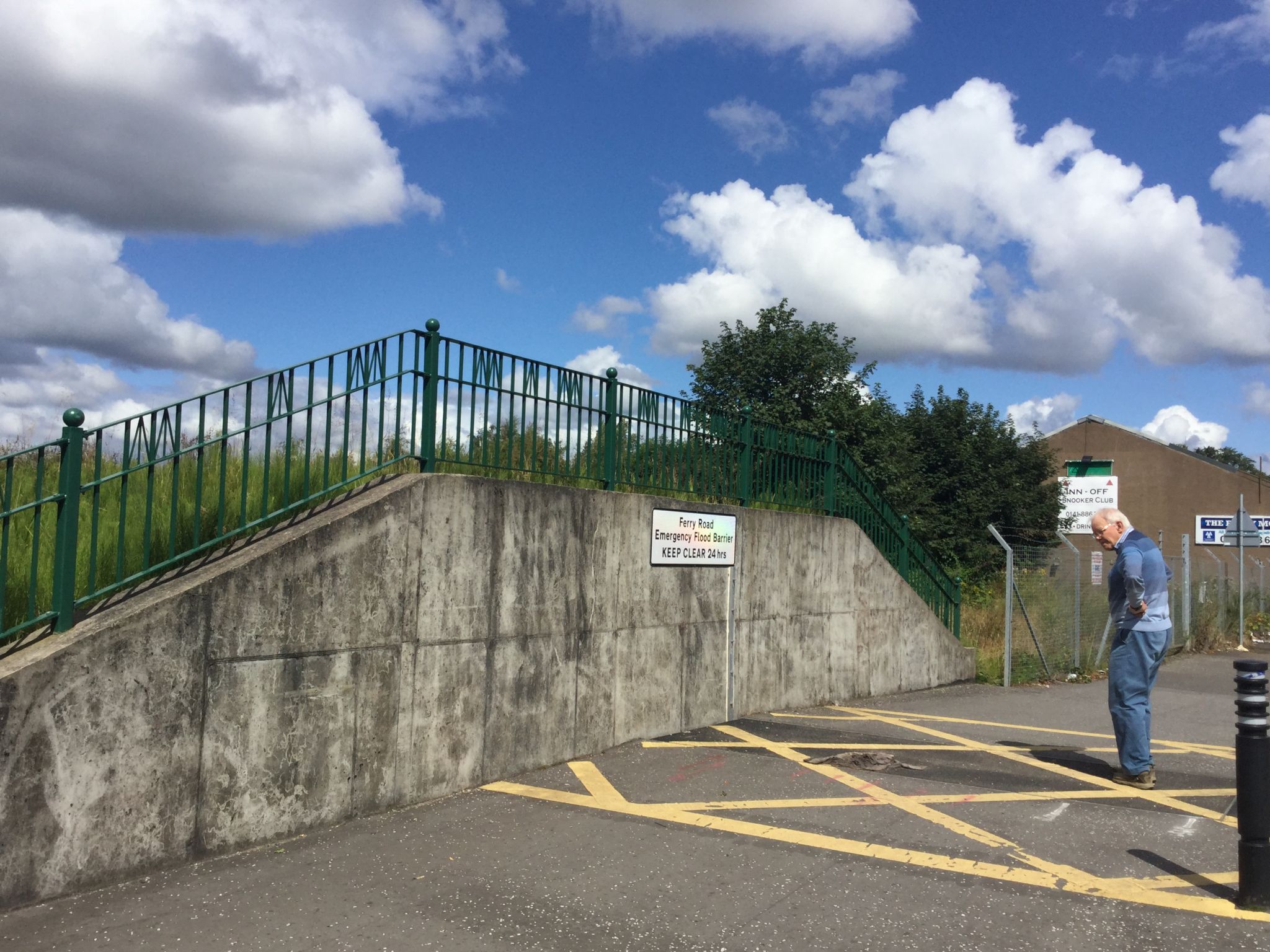 And this proud gateway? From a long gone estate? But Castlehill? 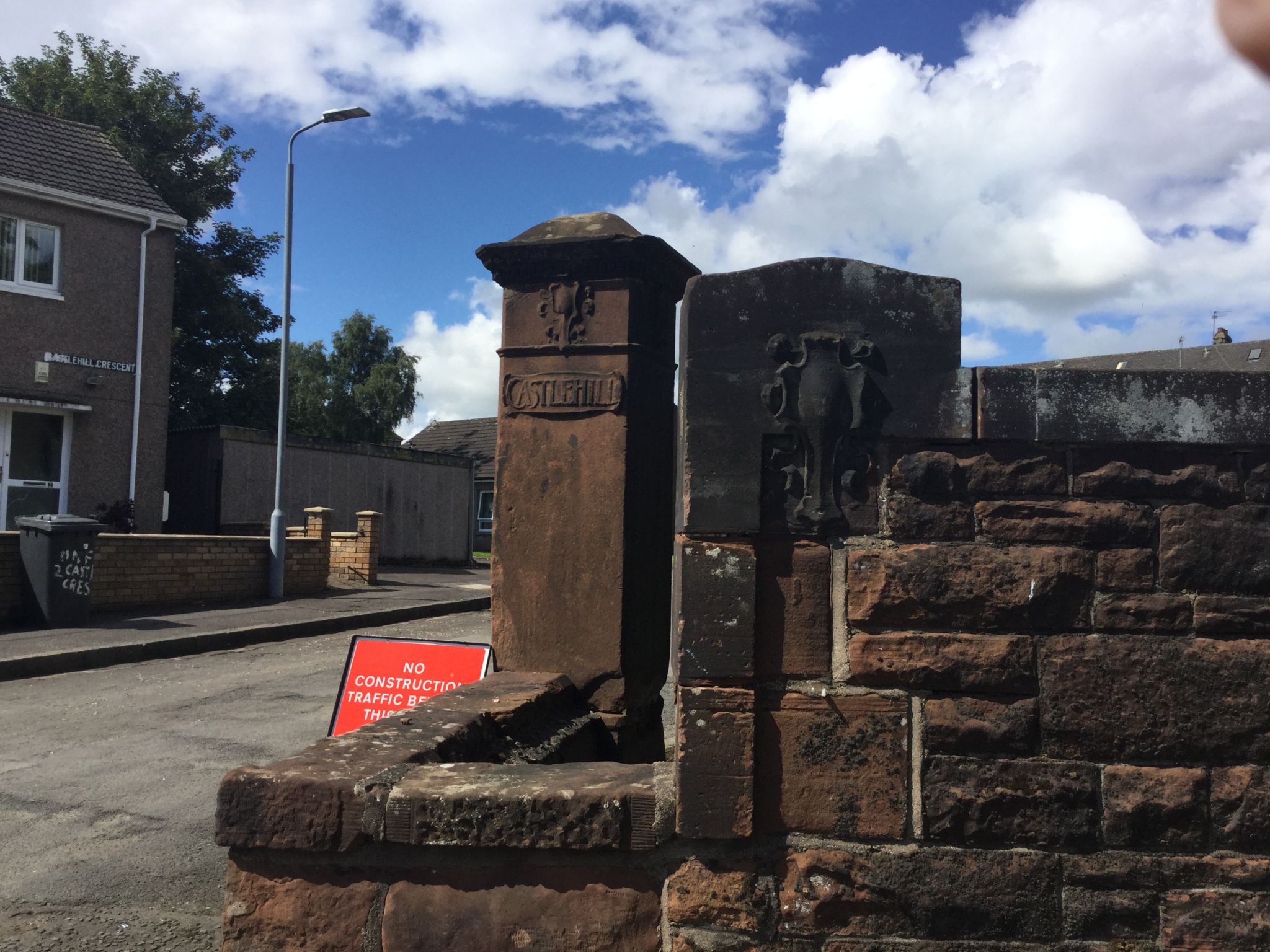 Curiosity insisted we look it up immediately.  Yes! Google and the map confirmed it. The nearby shopping centre was built right on top of a castle site! A King’s castle no less, built on an island named King’s Inch as a defence against Norse invaders coming up the Clyde. It had had a High Steward in charge, whose family went on to be The Stuarts!   And guess who is Baron of Renfrew? Prince Charles.

Just love discovering these bits of interest. There is always something!

The road we were on was named Ferry Road.  Presumably historic?

But no. Here it is, still an active ferry, though now pedestrian only. Loved the notice! 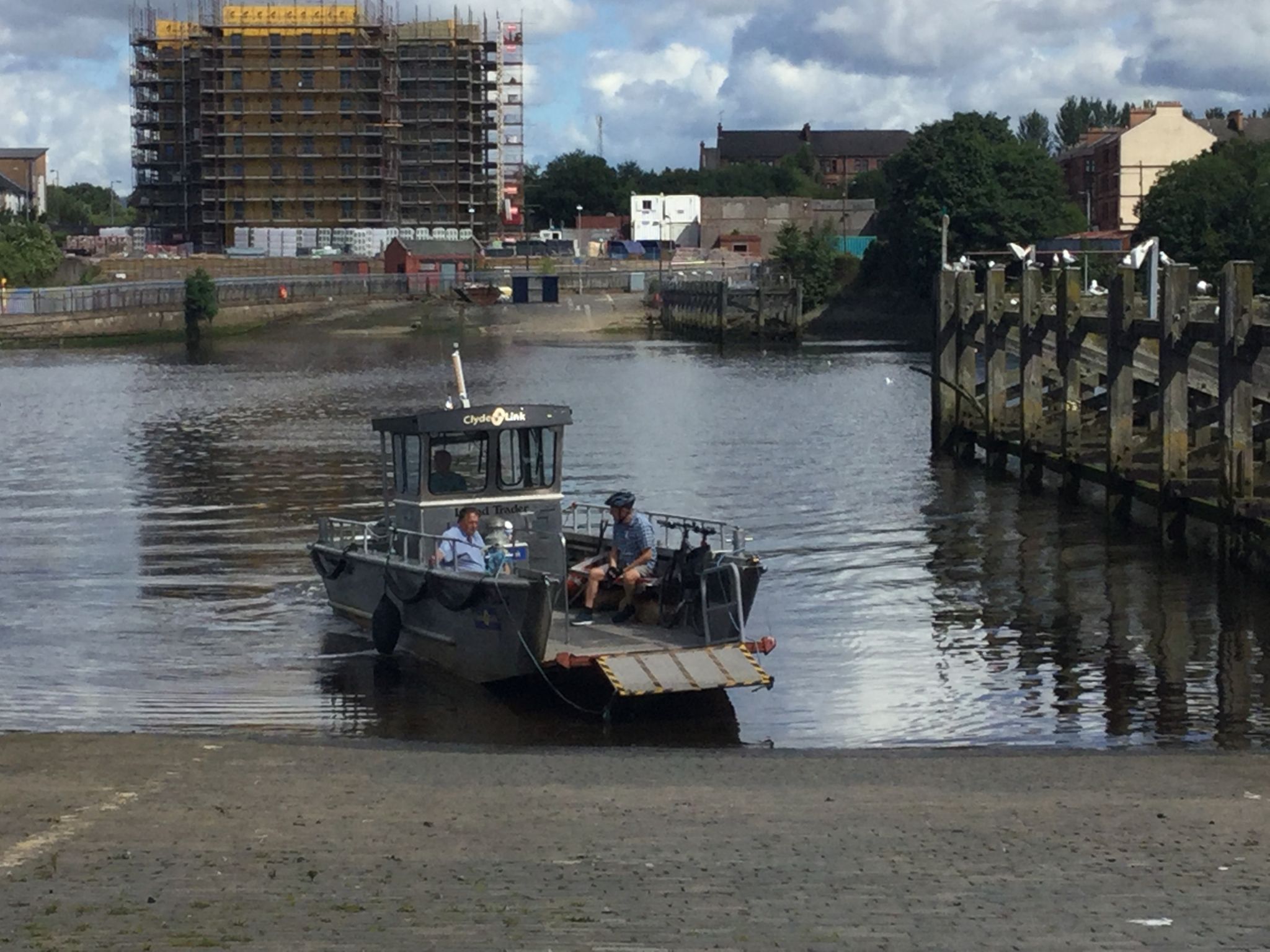 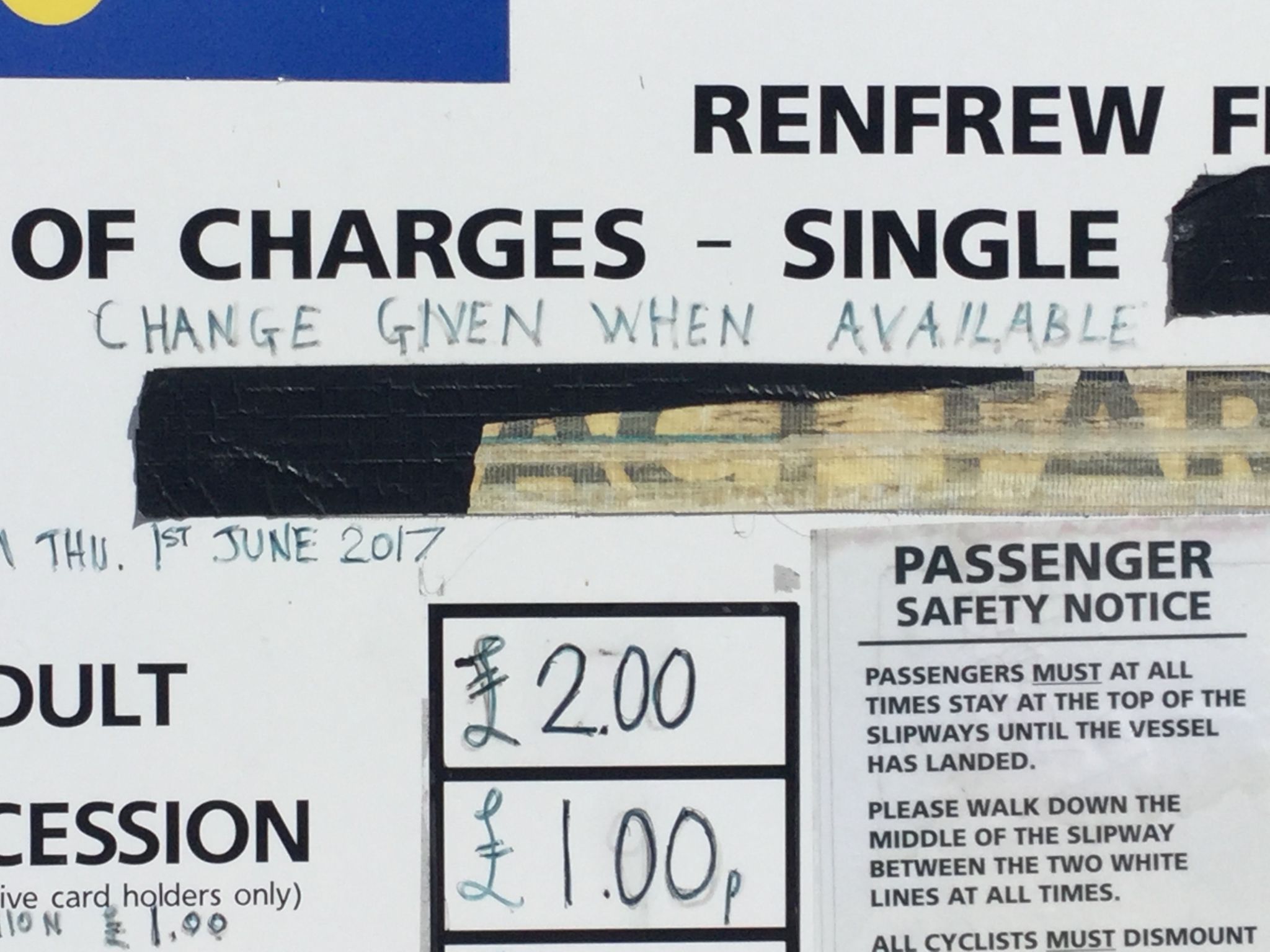 Google again:   Yes it is historic. There has been a right of ferry here from Mediaeval times. And a very important crossing too before the nearby bridge and tunnel were built. It was used by carriages with their horses which had to be specially strapped in . It was an essenial crossing point on the Clyde…no wonder Renfrew was rich! In one day in 1936, 21,000 people and 946 cars and vans used it!

But today, the ancient Ferry Inn sits quietly on Ferry Green. A lovely spot which must once have been total bustle and is now a charming spot to sit and contemplate the river. 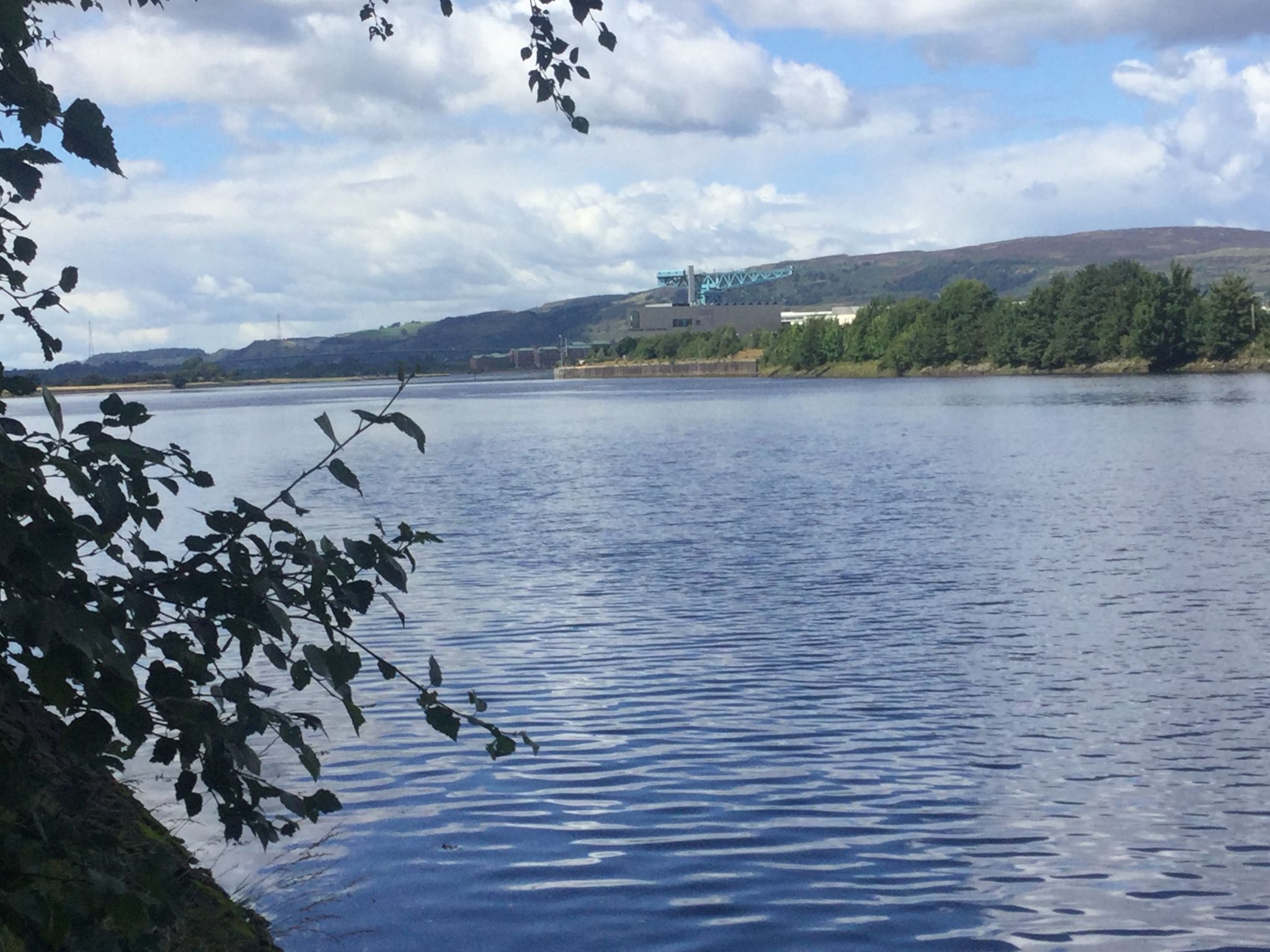 This gentleman was one of only 3 passengers today. 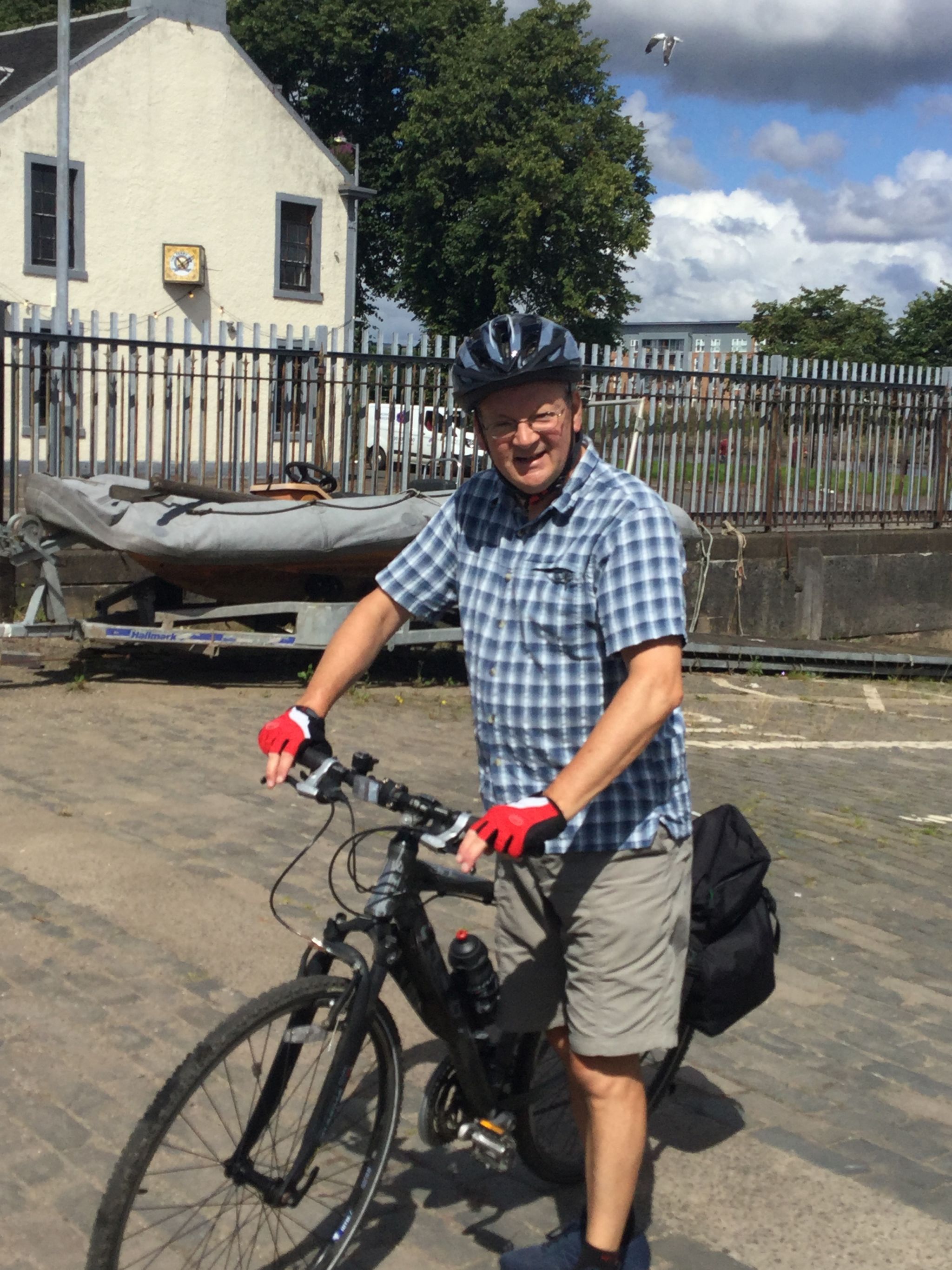 He told me he was doing a circuit crossing on another ferry further west and returning by  the path we were about to follow. Sounded a lovely way to spend a day of your retirement!.

Eventually the path. Setting off west into the green it seemed idyllic. Then the noise!  I havent heard anything like it since touring the Sheffield steel works. Screaming Metal being tortured. And there behind a rail were the victims awaiting it.

And further on was the result. Scrap metal. Awaiting transport down the Clyde. 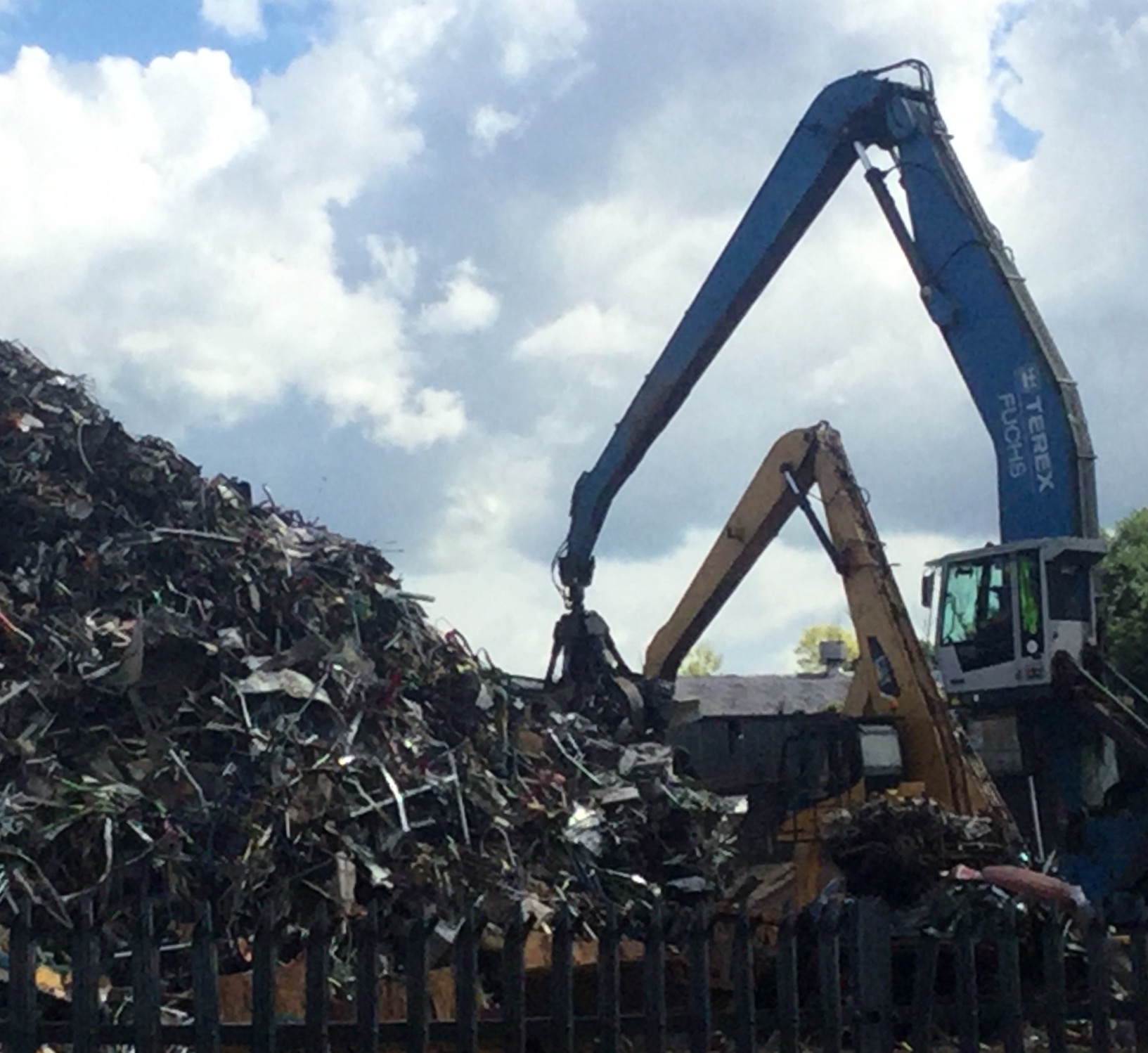 It was a totally fascinating scene. So powerful. Almost modern art in its textures  and the overwhelming noise was almost scary. Yet on the other side of our path. Turn 180 degrees and you saw this!  Or this. Wild jungle or manicured golf course with ancient trees. Absolute serenity!

Both it turned out were the remains of the historic and beautiful  Blythswood Estate. Dont think I have ever been in such a contrasting situation!

The scrapyard was huge. Overpowering yet almost strangely beautiful with its sense of an ending and beginning.  Perhaps that sums it up.  The space and the buildings (Google again) had been the been the shipbuilding yards of Simon and Lobnitz whose dredgers had kept the Clyde navigable. Over 1300 dredgers had been built here and cleared navigations all over the world , particularly Africa and the Panama Canal.

What an amazing place to discover!  No wonder Renfrew had had such wealth and pride. Hard to explain, but I found that incredible noise, power and contrasting green peace a very spiritual experience.

Quite Magical! Curiosity loved it.  The Knees had a good stretch. And Grandma highly recommends it as a weird place to go!

PS As it had promised, the path did become a green trail. It ran between the Clyde and the golf course with the view across to the blue fells in the North. And it changed again when we met the White Cart Water. Now the view was of fields and it proved a good spot for water birds. The Knees enjoyed that bit, not as much standing about being amazed!

An old friend of my husband, who lives near Manchester, saw it and sent this:

One of my two close friends was a son of Hugh Hagan, a director of Simon Lobnitz. My friend Brian was a naval architect and worked for the company. Brian foresaw the closing of the company and turned his hand to management consultancy. Alas, he died some years ago.

My wife Joan comes from Paisley and used the old ferry on a regular basis. Another connection is that the late Alec Duncan, who golfed with us at Killermont, and who had a chequered career, was at one stage of said career ” Captain” of the Renfrew Ferry. I use the word “Captain” advisedly, as not much captaincy was required when the ferry was on chains.”

You may also enjoy: