A year ago at 80+ I joined a class, Blogging for Beginners.  We were told to find a voice and a niche.  I chose to write about the fun and nonsense of being ancient.

Six months into it I announced that I was thinking of writing about sex in old age.  The roomful of youngsters were amazed , shocked, or even better, jaw dropping gob smacked. Especially the men.

It was all I needed to be convinced that I should do it!  A stereotypical  image of old age was sitting out there.  And it was just plain wrong.

A taboo subject? Yes.  But not for those youngsters. One of them has just won a National blogging award for writing about dating and sex.  Young people’s magazines are full of explicit and helpful advice.  So what is going on here?  Why is it accepted that young people discuss their personal  lives openly and not those of us in later years? Why were they so unbelieving?

I expect you know…They can’t imagine that we still have sex, certainly, not into our 70s and 80s.  And equally perhaps, we Older People are reticent about saying so. (I really do wonder why.)

It seemed to me that we had created an unhealthy situation in all respects : damaging to society, unhelpful to everyone, and worrisome to those about to get there.

With great relief I found it was welcomed and produced nothing but positive reactions.

BBC Radio 5 Live picked it up.

They asked me to join two other women on the Emma Barnett show for a discussion on Sex in Old Age. 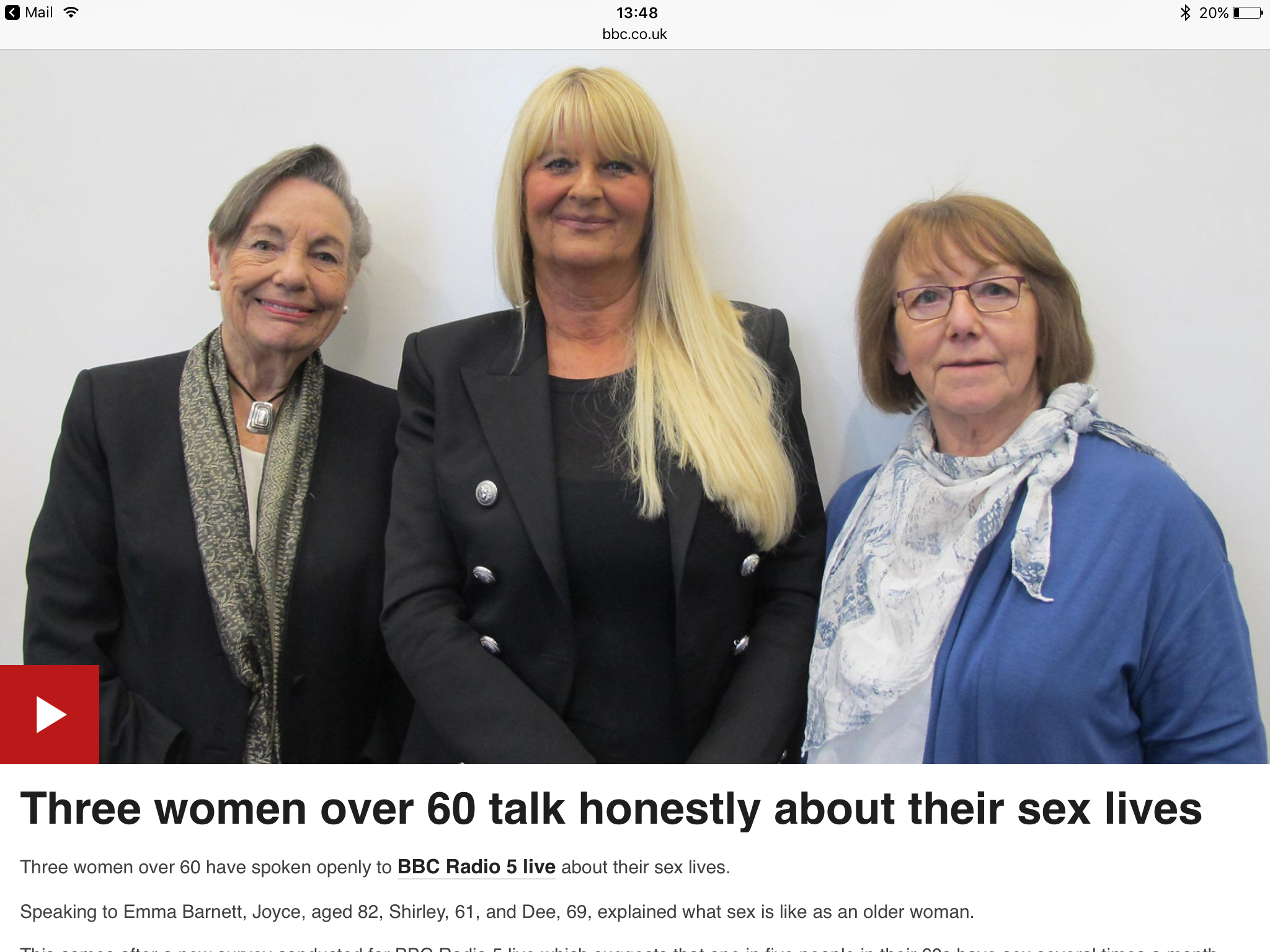 It was great fun!  Had to go to Manchester to record it.  Emma was charming, perceptive, warm and very curious.  We were given lunch and a chance to get to know each other  before we started.  I liked them. We all felt the same, sex was just as good if not better in later life. Why was it hidden? Why was the image of later years so bad? So wrong?

It needed changing and we all felt we happy to try and do it. 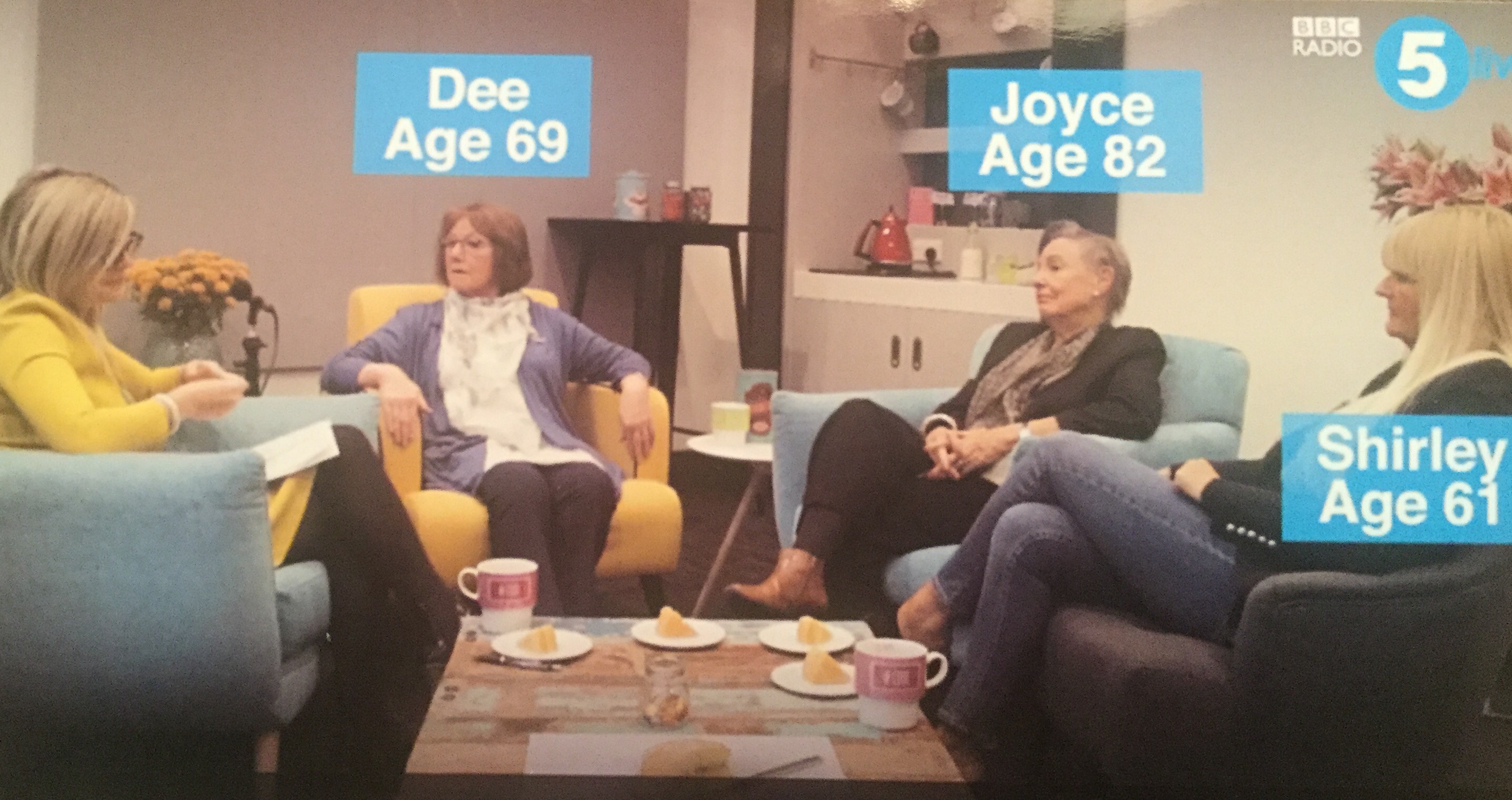 So we were given, mugs of tea, cake and comfortable chairs and settled for a cosy chat.

Although it was to be a radio broadcast, the BBC also wanted to film us talking. Apparently  to use on BBC News on line.  So the whole session was done in front of cameras.  And of course, the camera crew, sound recordist and even the producer were all younger men!   They managed to stay professional, but at times their faces were a joy to behold. Especially when we got around to saying sex and orgasms were better when you were older…more time and more know how!  Not sure if any of them had ever heard an 82 year old say the word orgasm before!

Again, once it was broadcast, the coments from the people who rang in were all favourable. Interestingly, many said it was reassuring, which is what I had hoped and many felt it was needed. Younger people were truly surprised, yet I felt they sounded happy to hear it.

I was so glad we did it.

A key aim in my new life as a blogger has been to change the sad, current, media driven, image of old age.  Instead of being seen as a happy fulfilling period of ones life, it was being portrayed as finished and dismal.  But it isn’t!   And it was great to have a chance to say  out loud that to my surprise I have found that life at 80 is great.

In terms of sex, you only have to look around.  Almost all the couples you see holding hands are in middle years and onward, grey hair, wrinkles and all, they still clearly have a physical bond.  What is odd about that?  Older people are normal humans who have a normal need for, and delight in, mutual sensual pleasure.

Whatever has happened to their bodies is irrelevant,  in their heads they are still 17.

You can find the discussion on:   http://www.bbc.co.uk/news/av/health-40879223/three-women-over-60-talk-honestly-about-their-sex-lives.