An 81 yr old takes The Knees and Curiosity for another Magic walk.

This time, the west coast of Galloway.

An empty place, just perfect for the kind of wander Curiosity enjoys. Not too good for The Knees though. Justifiable complaints began about cliffs and rocks, and then The Balance joined in, predicting wobbly pebbles and slippery seaweed….Had to ignore them.

They were quite right though. I, stupidly, hadn’t brought a stick……never learn etc. 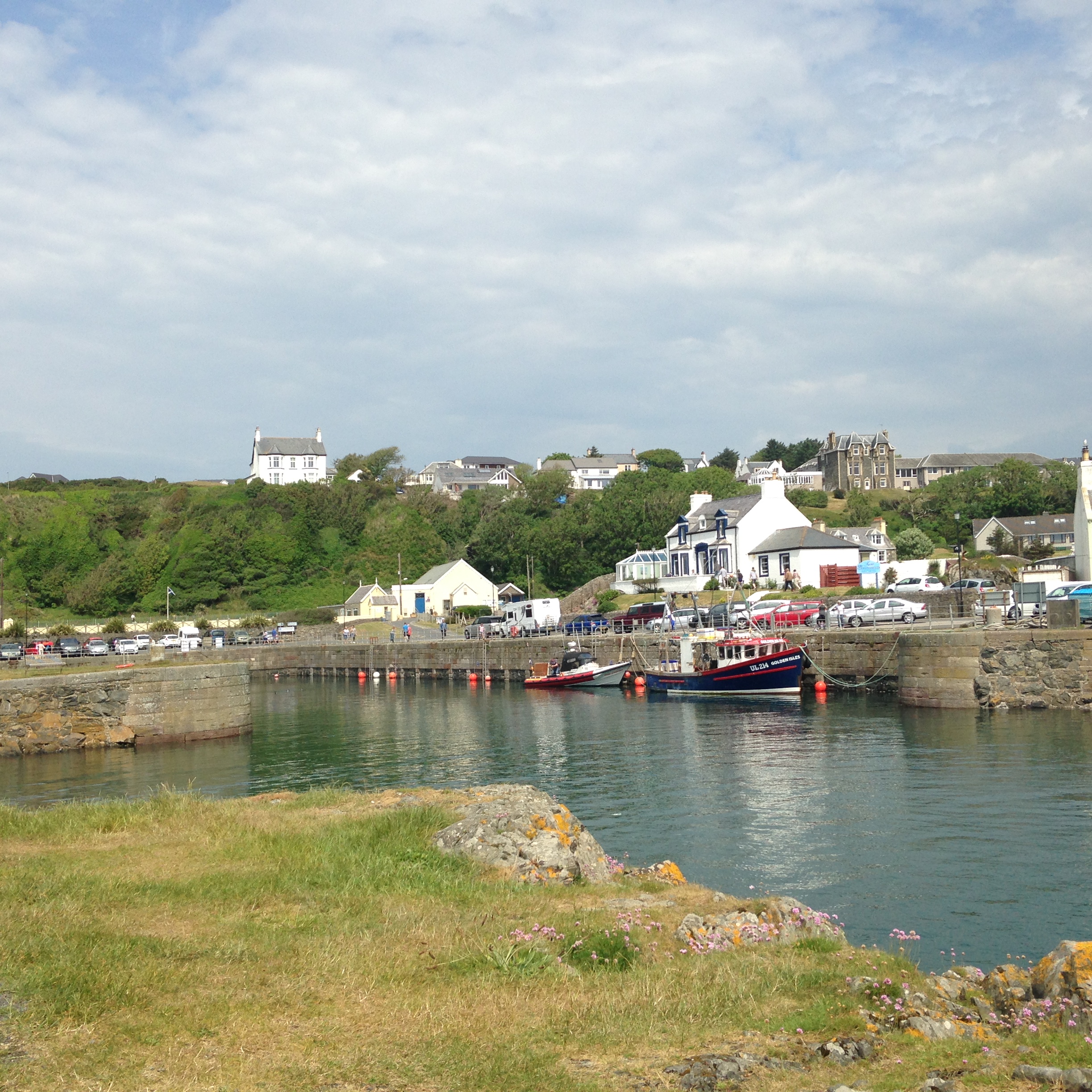 We began at the idyllic harbour of Port Patrick and then explored Knockinaam Bay, a little to the south. 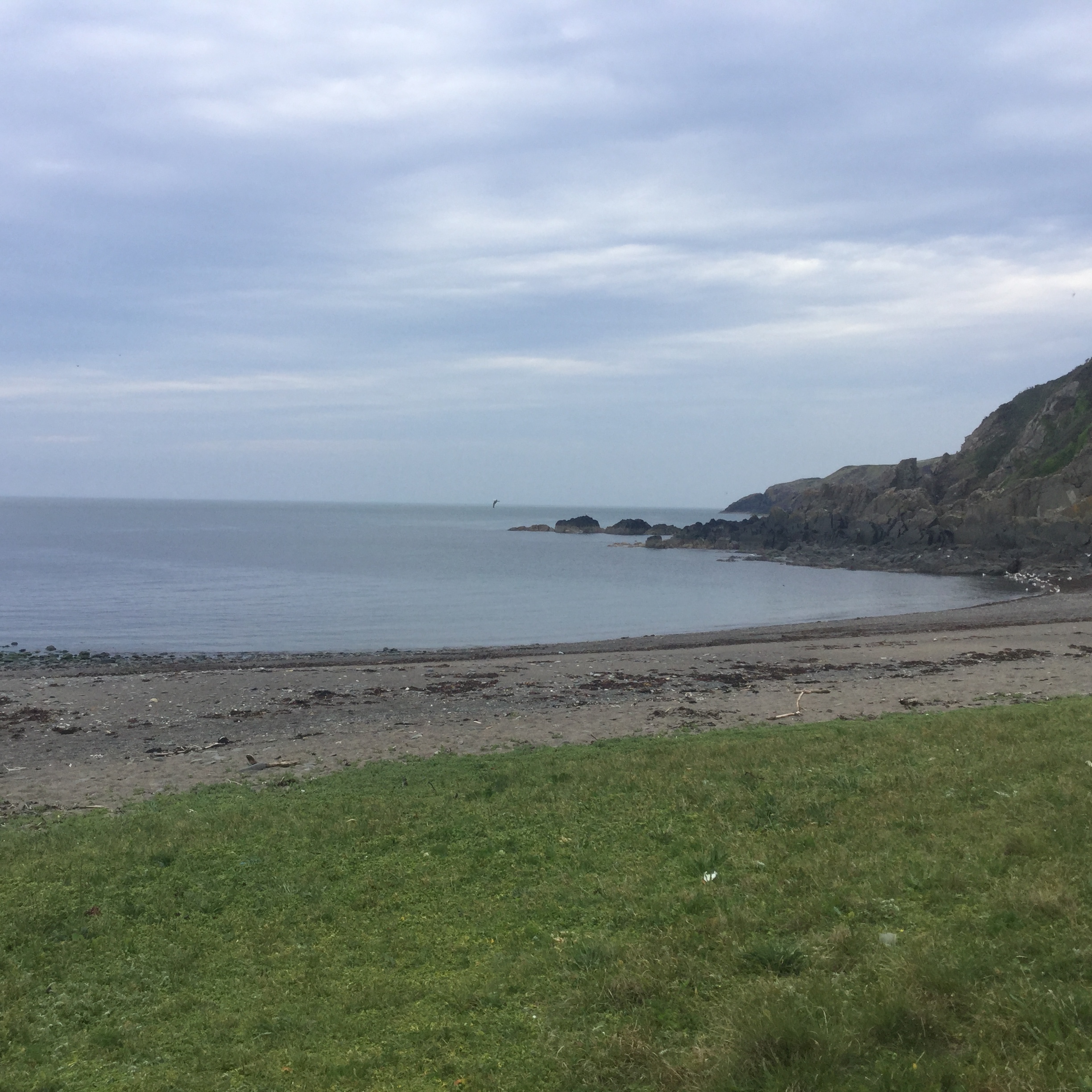 The bay too is empty. Behind it is an old lodge now a small hotel with a good  restaurant. If you sit quietly on the sea wall, rabbits emerge to play on the hotel’s sumptuous green lawn.

Walking down the green lane to the bay you could hear that loveliest of sounds, a gurgling brook. Hidden at first, once near the beach it came into view. By then it had turned into a pretty rock pool edged by pink sea thrift.   Back to all those childhood crab hunts… 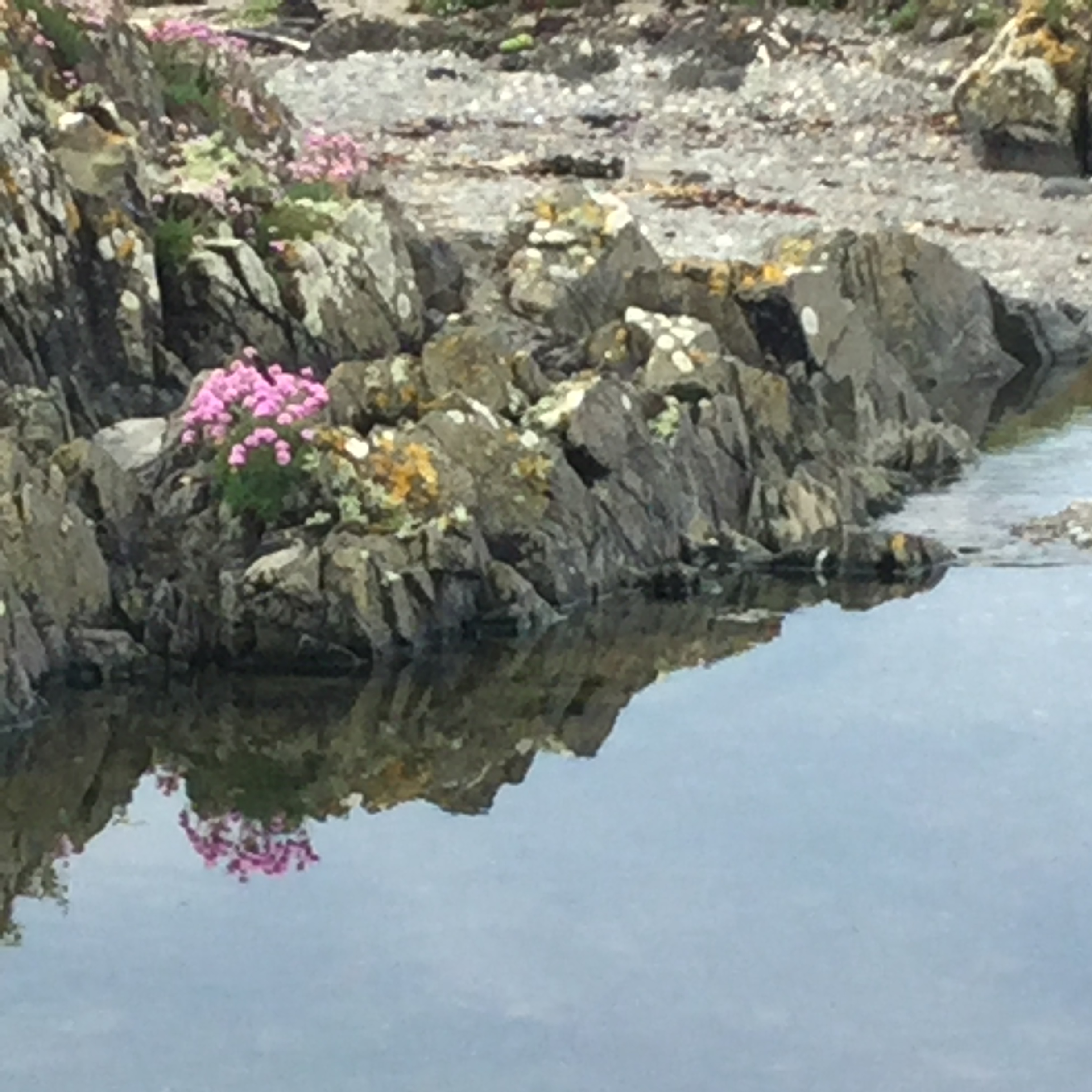 But what is this? A malevolent looking eye emerges from the water… 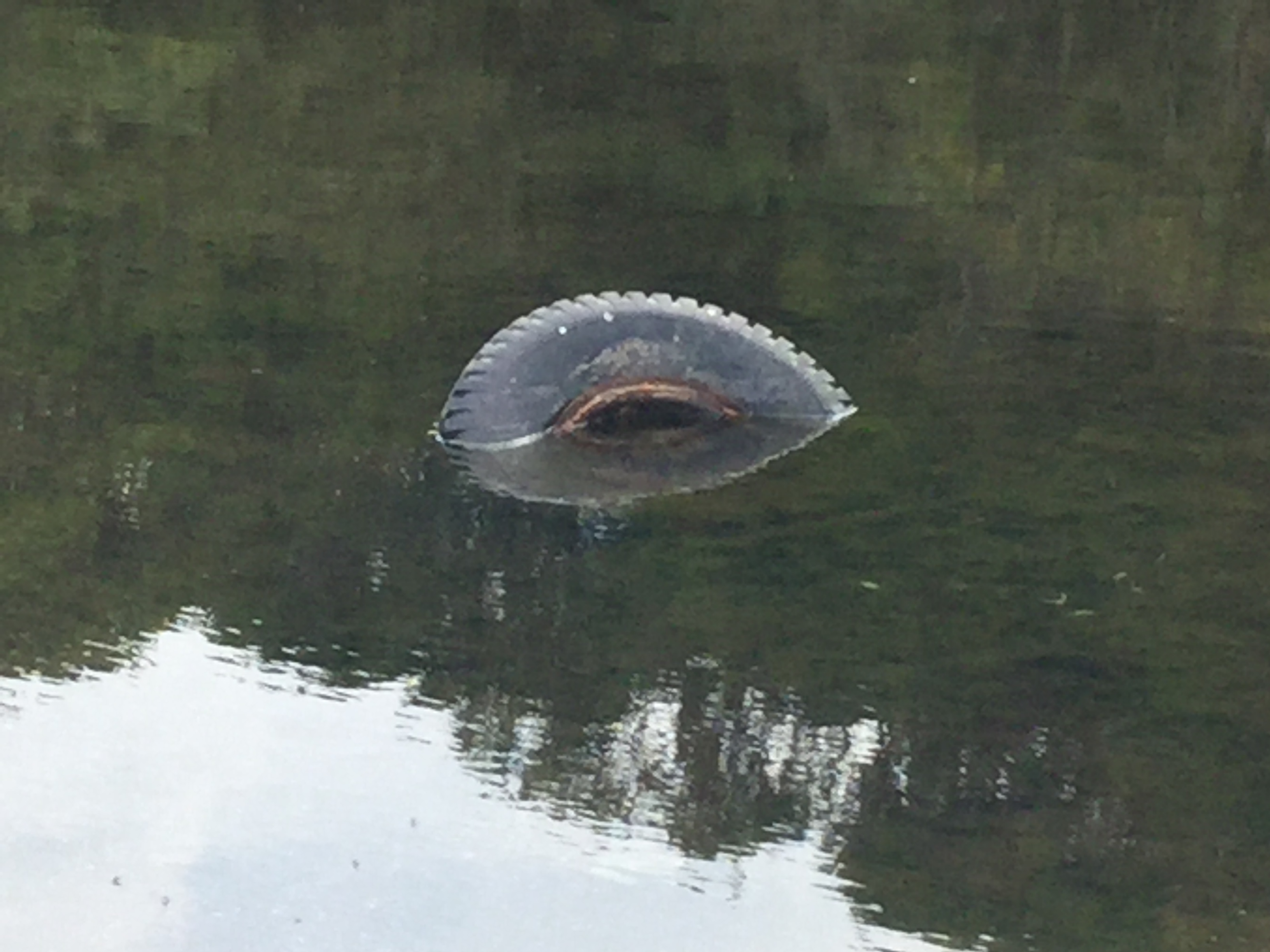 A monster lurking?  It certainly would have been when I was 6. Still feel that thrill of something eerie!

But then, head round the rocks and find something very odd!

The stream has disappeared.  Literally.

Look, there it is, flowing towards the sea. Then gone!  That quite large pool has sunk itself into the shingle.

Curiosity was delighted! How did all that bubbling stream disappear? Underground tunnel to the sea?  Of course! 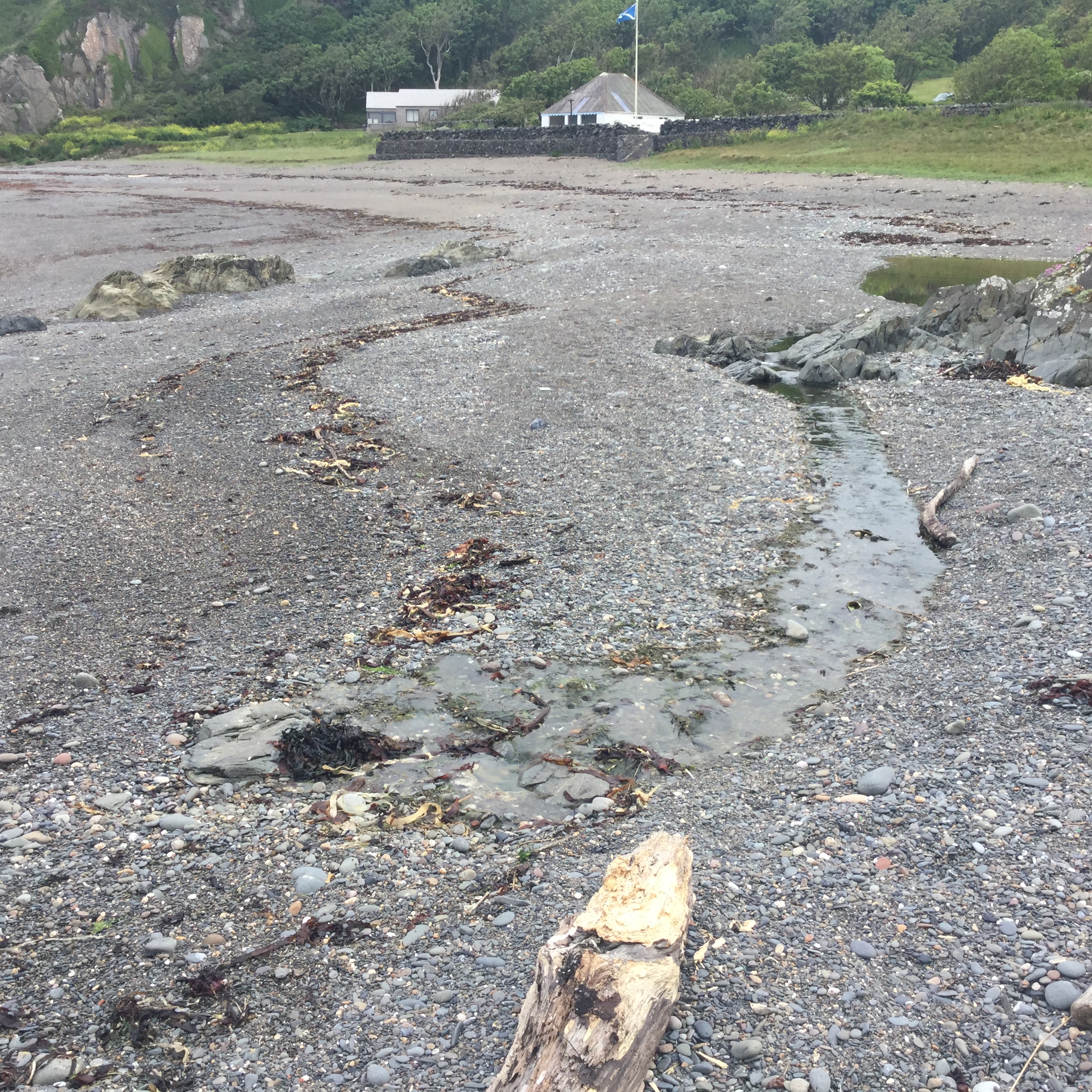 The shingle produced another question.    What is this plant? 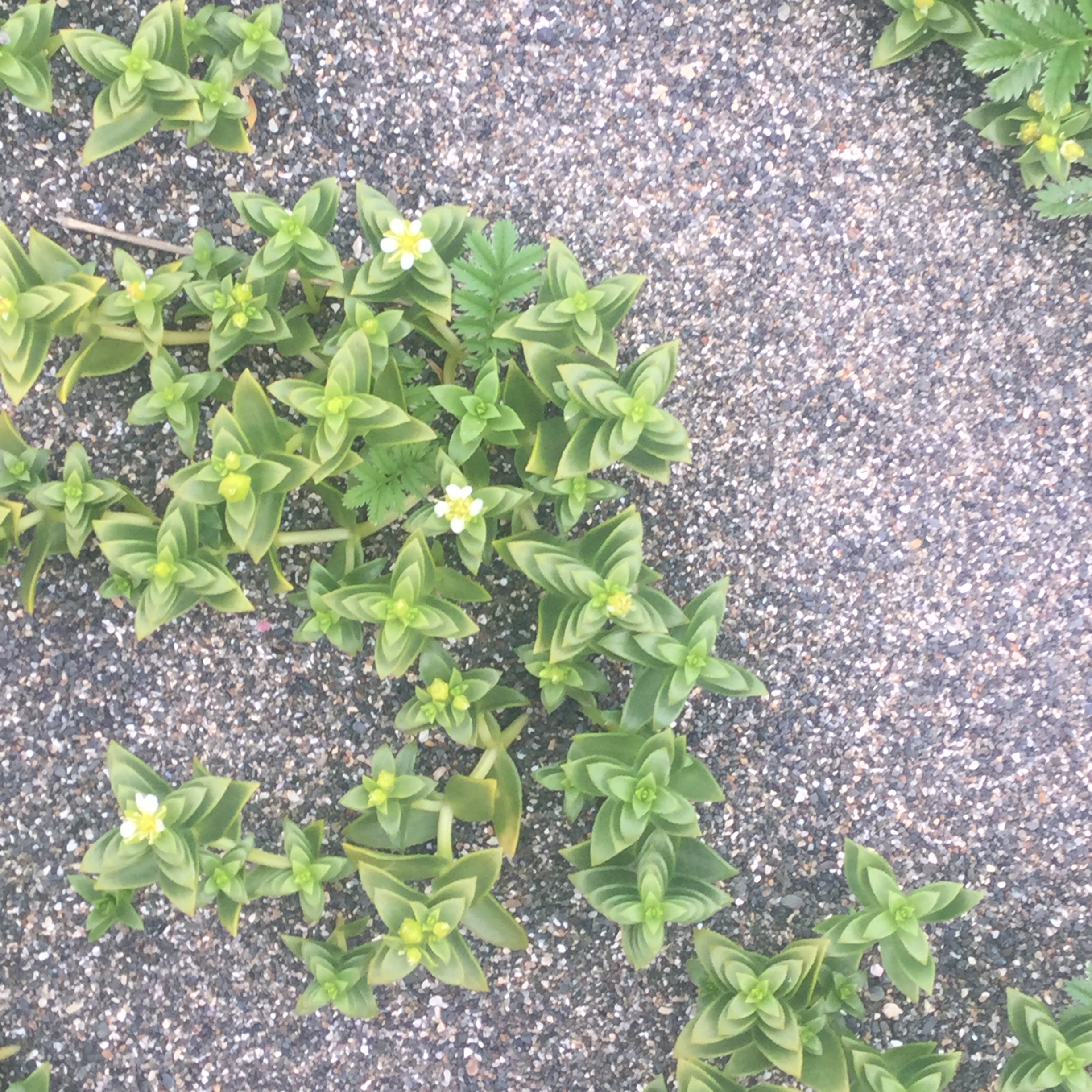 Had to consult botanist friends and Google to sort it.  Sea Sandwort!  So good to find.

81 yrs and never seen it before. And so pretty!  Geometric. Almost sculpted. And intriguingly a kind of ‘Trans’ plant! Apparently it can be male or female or a hermaphroditic both! Maybe should be named the plant of the year?

Intriguing rubbish by the rocks. Feeling creative..  Must do something with that.  What? Peer around to discover what has floated in. Ah, a little tweak and….

Creatures washed up from the sea!

A sweet fish, but had that gaping ‘basking shark’  really eaten a full size football! 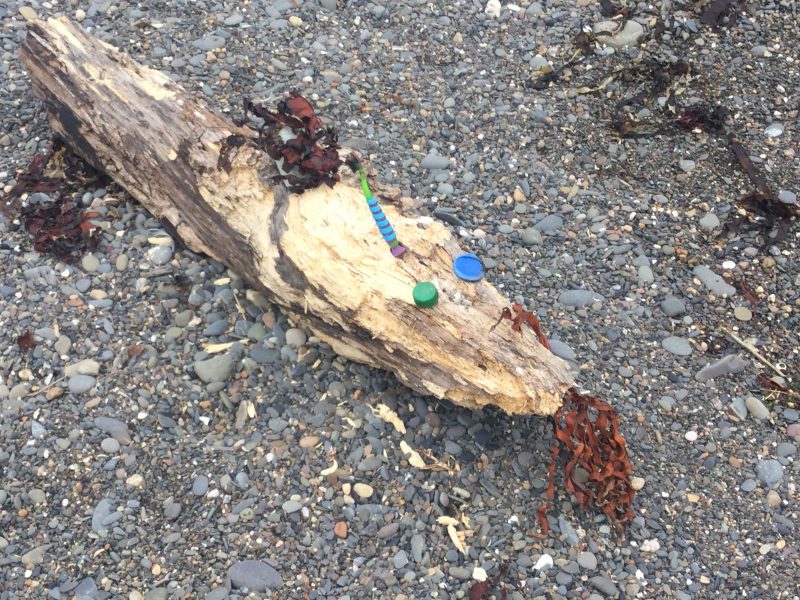 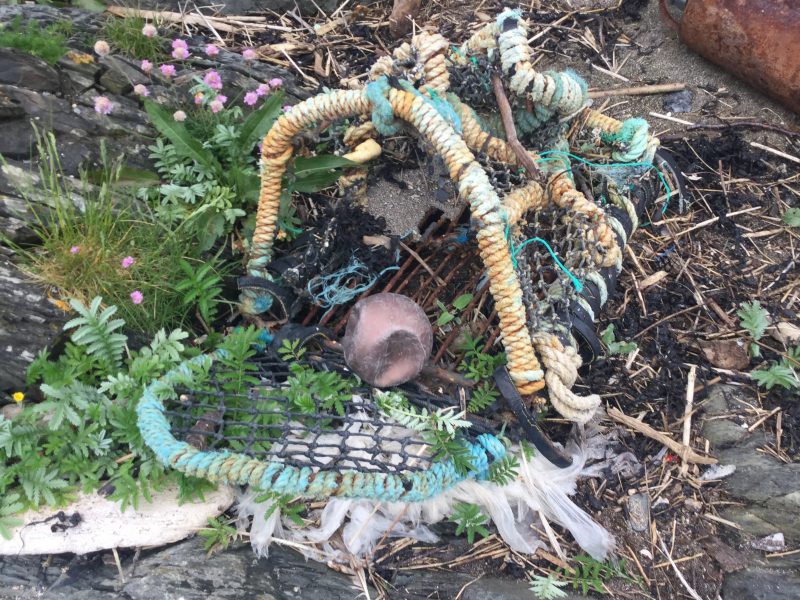 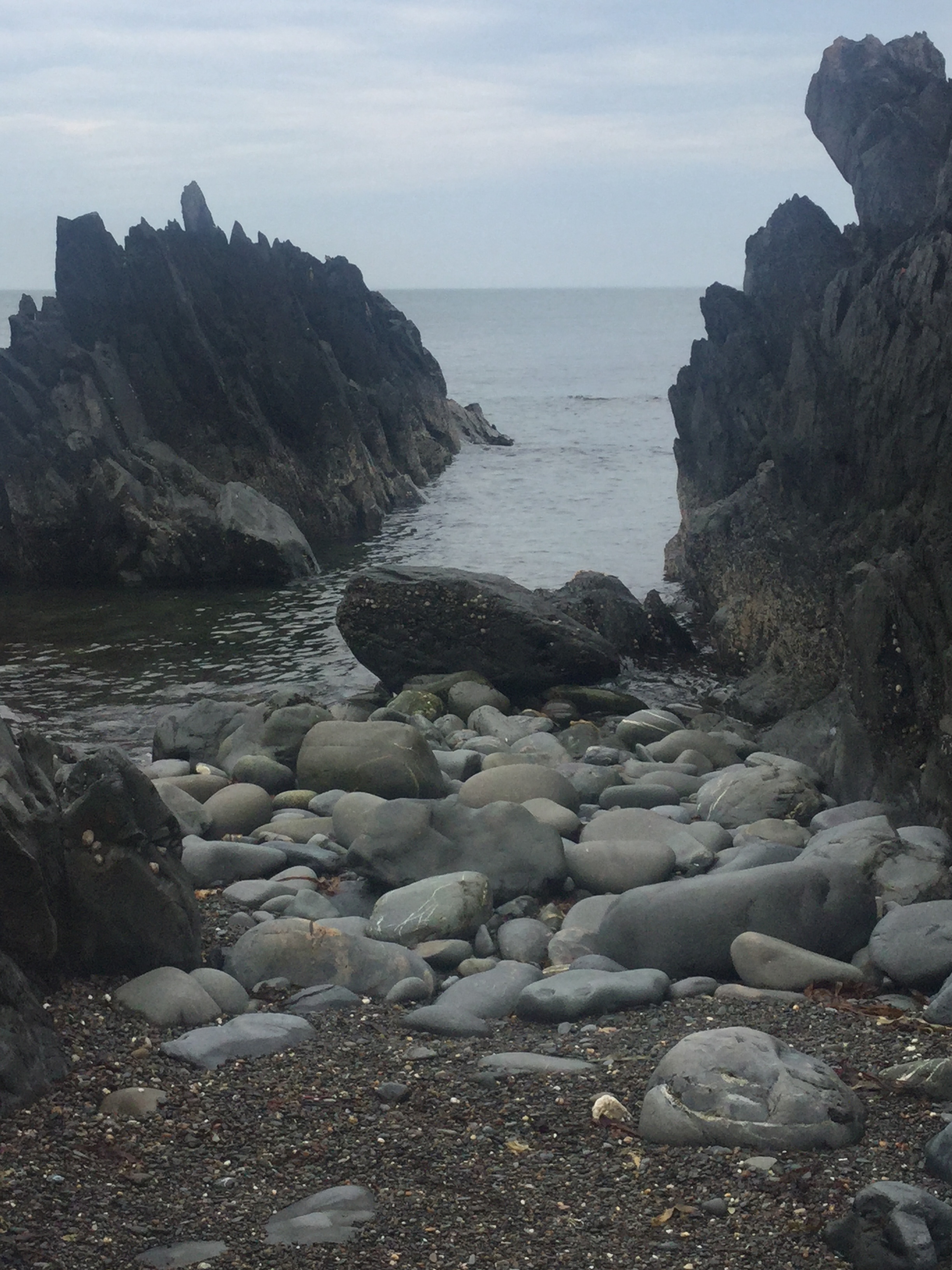 But of course Curiosity wins. What’s is round the corner?

This! A Prehistoric Dragon?

Look at those back claws…and that spinal crest!  It only needed its eye restoring. 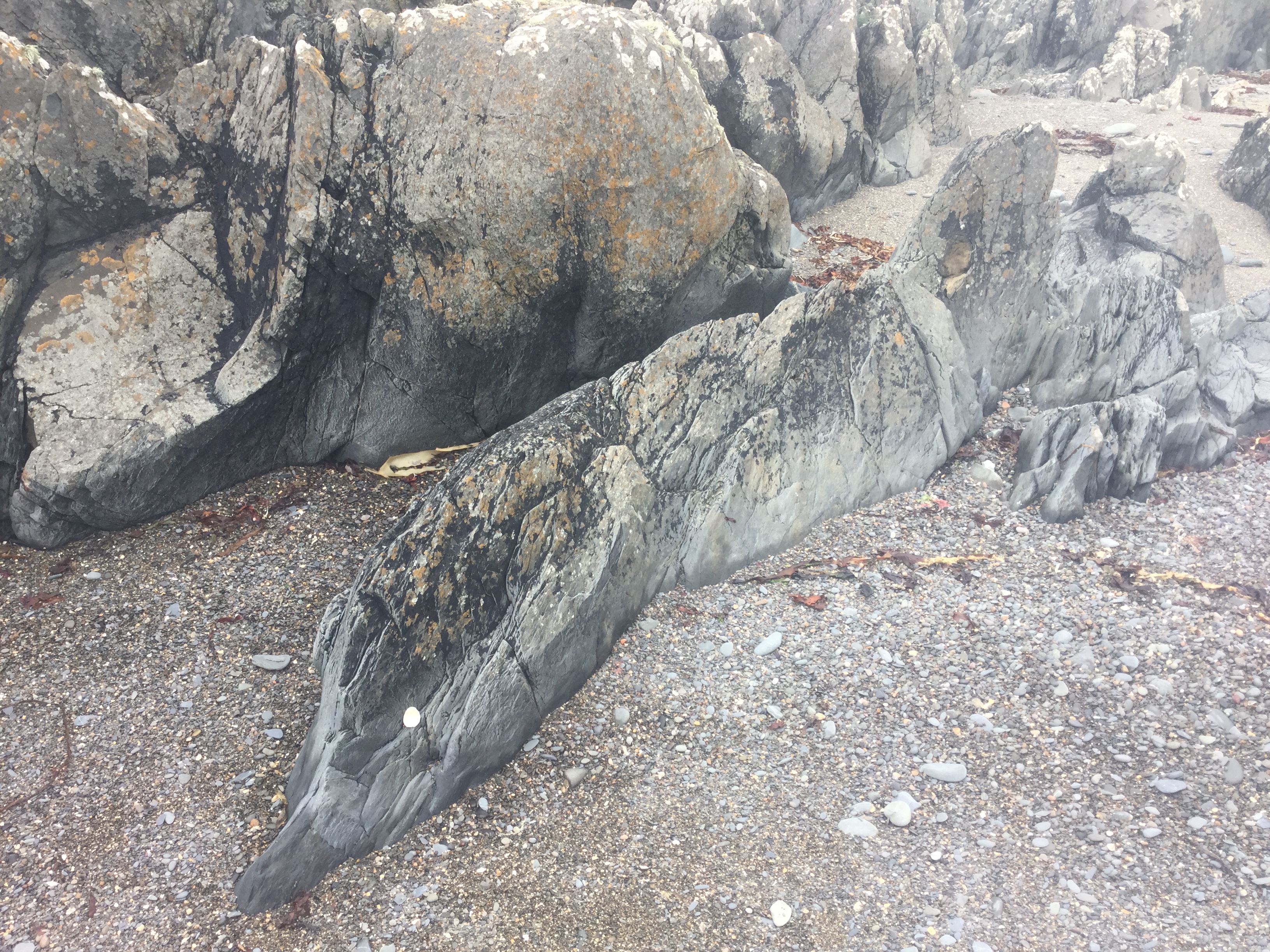 And this must have been its den….with these rocks to guard it?

You can imagine the panic from The Knees and The Balance by now! There is a limit to adventure at 81….But in that cave were weird things too. Had to go and look… 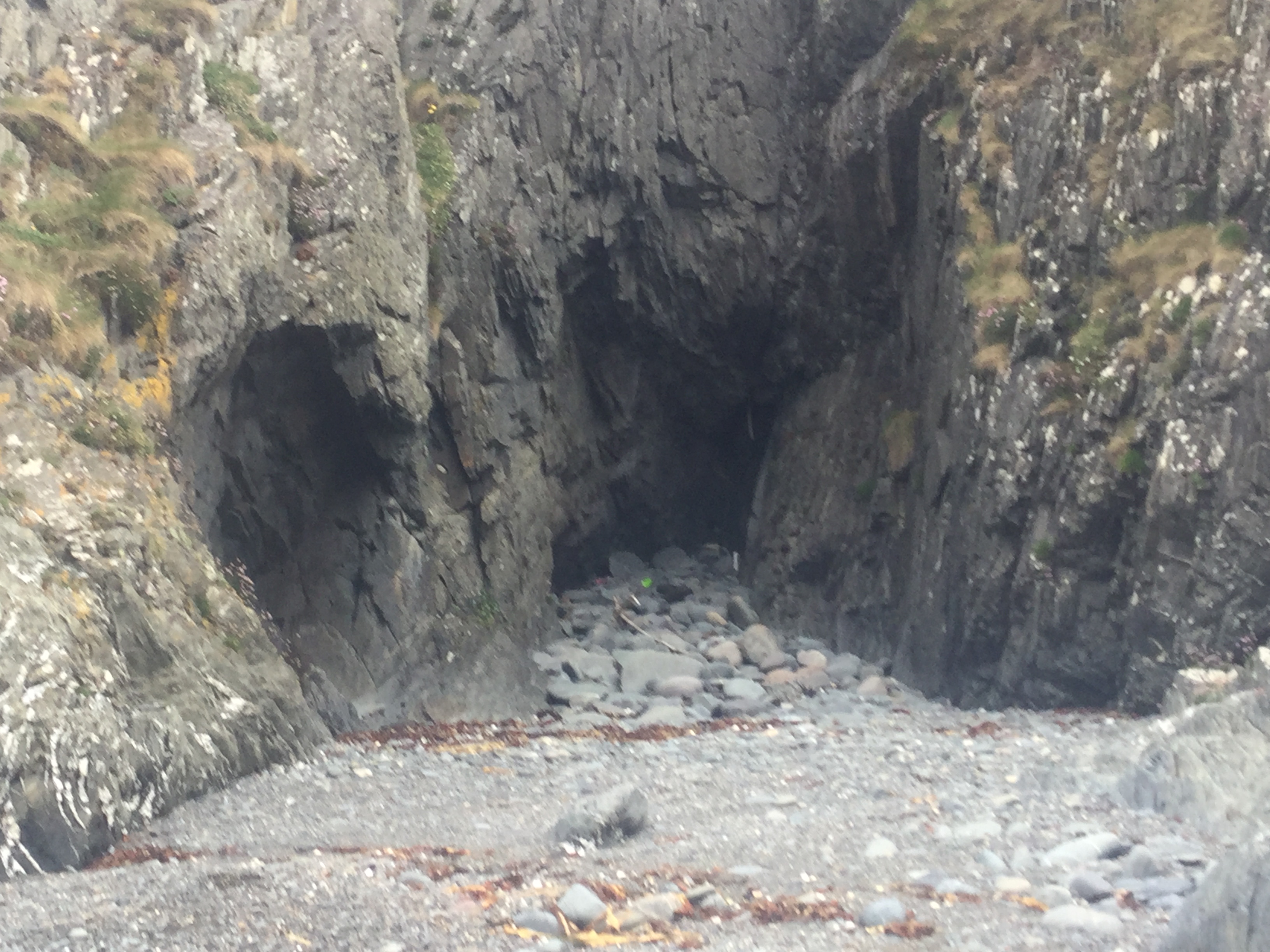 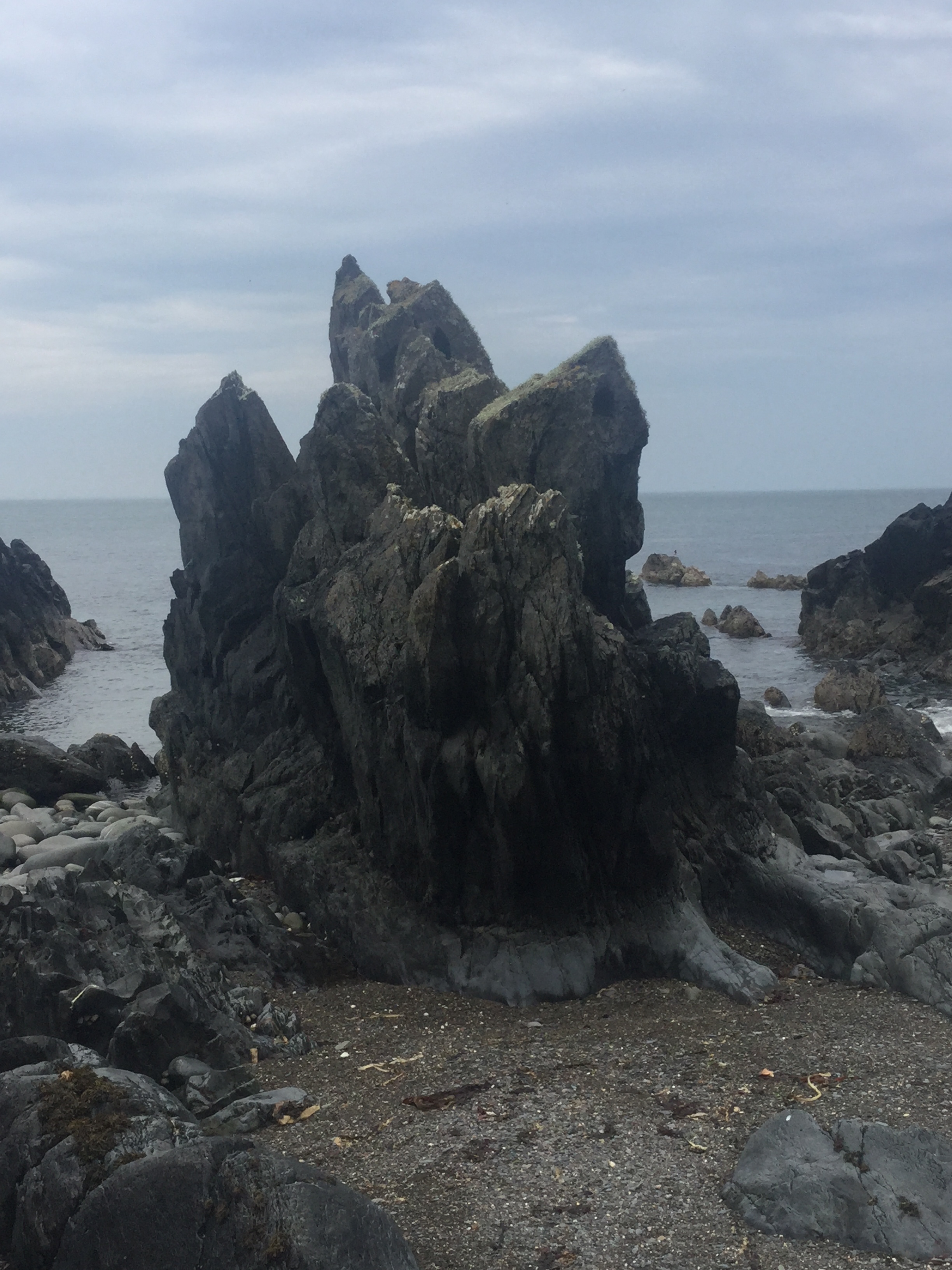 Eventually Curiosity gave in and the very dodgy scramble back began.

Memo to Grandma:  Never again go on a pebbly beach without a stick! 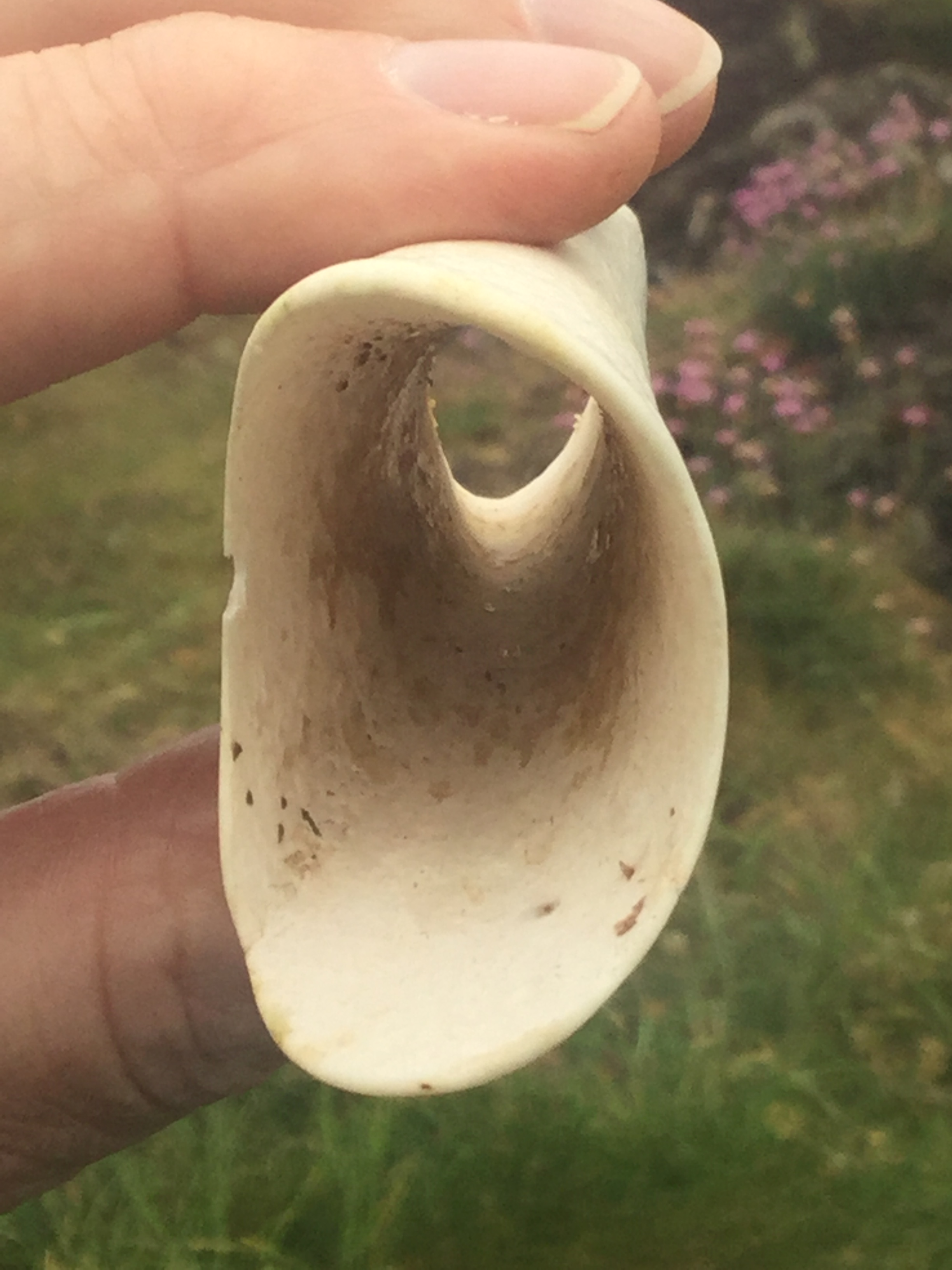 This could be what happens!

You would turn  into a Beautiful Bone.

Remains of the Monsters lunch?