The Knees had to have their walk. Decided to take them along the River Clyde, East of Glasgow an area new to me. The riverside path is flat, so they were allowed no moaning. Curiosity came too, but in no great hopes. However, within minutes we were joined by a delightful friend, Nonsense……In stitches in no time!

You don’t expect much of the East End of Glasgow, it has a poor historic reputation, but following the rehabilitation brought about by the Common Wealth Games, an increasingly improving one.

I took the refurbished river path which continues east from historic Glasgow Green. Odd name that, I thought when I first heard it. Usually, in my head at least, Greens are associated with pretty country villages, not ex industrial cities. But this one is the real thing, with large, gnarled ancient trees….. I think The Knees rather empathised with them..

The Green is a well loved, well used community asset. On its Northern edge is this building! 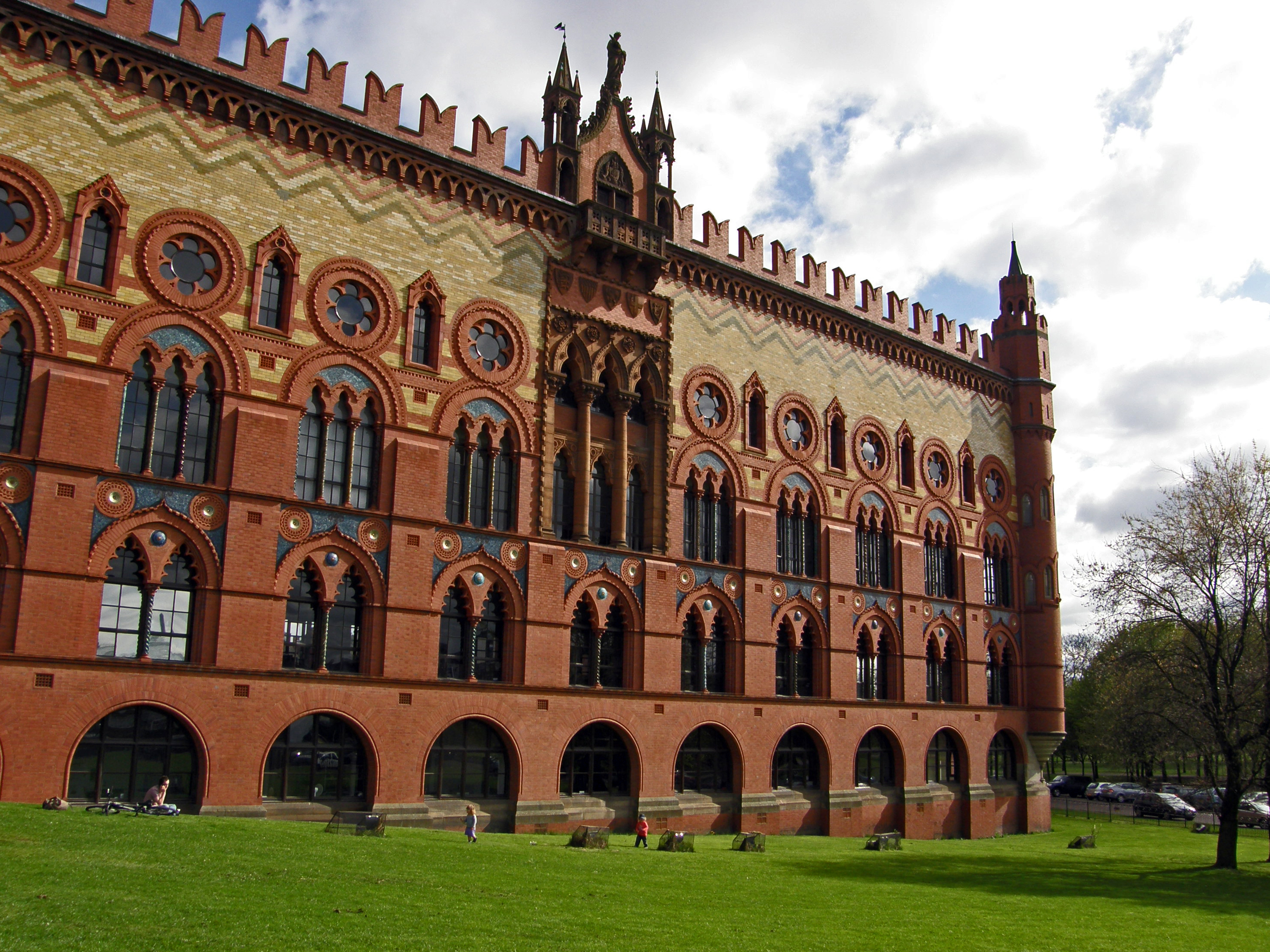 Where on earth would you expect to see something like this? Not Glasgow! And would you believe that it is a factory? It turns out that a Mr Templeton wished to build his carpet factory here, but the Council of the time said it would not be appropriate in this area . So Mr T hired an architect to create a factory building that would be elegant even in Venice. Isn’t it fantastic? How could they refuse?
I wasn’t surprised to see it, I knew it existed, but I was surprised by the delightful nonsense mode it created, that light hearted ready to laugh at anything feeling.

So, Nonsense joining us, we happily progressed along the river, expecting nothing, but hoping. And here it was. The most perfect piece of nonsense you could wish for. 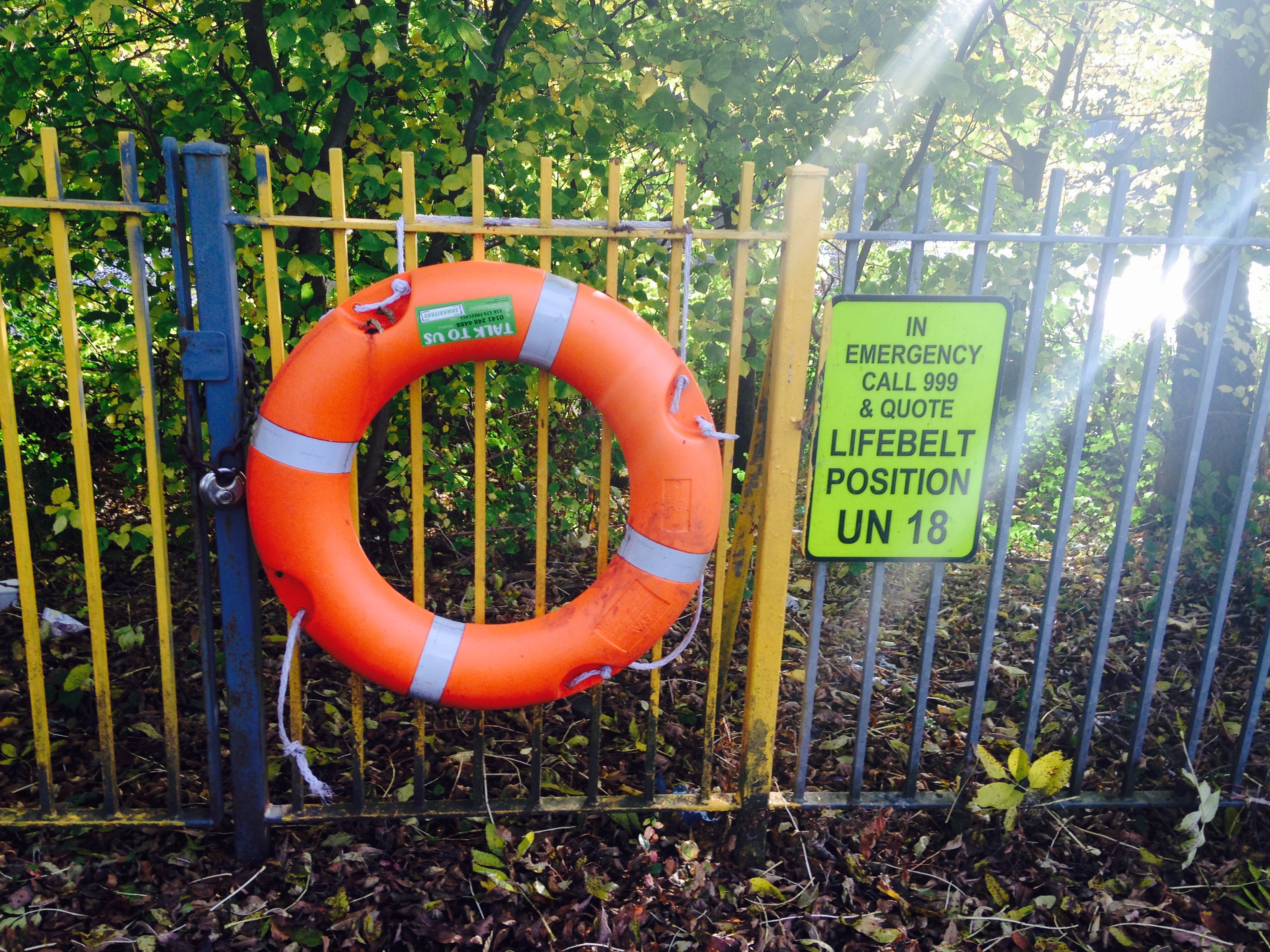 This piece of riverbank is protected from us the public by a railing separating it from the riverside path, a path you will note, presumably created so that we can enjoy a stroll by the river.

The result is not, I think, what they planned.  All the seedling bushes, happily protected, grew and grew, screening the river perfectly. We the public walk on an asphalt path between two sets of prison like railings and just listen to it. Do you suppose they didn’t foresee that? Why not!

Ah yes, there is a gate. But not for us?  Padlocked. Really determined on keeping the river safe from us aren’t they?

Attached to the gate is a life belt. Is it is for rescuing people who dared climb the  fence to encroach on river and stupidly fell in? Or maybe for if someone in the canoes you can hear passing by had an accident?

So what do you do if  you hear someone drowning ..you can’t see them because of the bushes. Grab lifebelt. Then realise you can’t throw it, because of said bushes. Rush to open gate. Beautiful padlock doesn’t budge. Can I climb that fence? No, not at my age! Phone 999? Never remember to charge it…Is there a young man who can vault fence? No. Fat dog walking older lady, like me. She doesn’t have a phone either….

Just who wasn’t talking to whom when all that was planned? Didn’t anyone notice how stupid it is?

Absolute Nonsense certainly, but not really sure it is a laughing matter?

A mile or so on the everything changes. We have crossed some kind of boundary. The railings stop, the banks are clearer, we can see the river. Out of prison, delightful morning. Ah yes, we are allowed to be stupid here, could even fall in if we wished. But now the lifebelt is on a post. Even I could reach it. And get to the riverbank!

Curiosity really wakes up here. Why did the last few miles of the same river need railing: expensive railings too, both to erect and maintain. Who made that very costly decision? On what grounds?
Can’t believe the public asked for it, and the same ‘Elf and Safety ‘ legalities must surely apply.
What is going on? It is looking like a rather significant waste of public monies. Curiosity now wishes to know how we the public challenge that?

The Knees insist we move on, so we cross a bridge and return on the opposite bank. This turns out to be an area in the middle of rehabilitation.
Rather sweet really, beautiful paths, seats and grass by the river then empty unbuilt upon wasteland. And yes! Another lovely bit of nonsense.  A sign on a fence between us and the river.

Wonder if they fear that Japanese knotweed will somehow attack the river. Do hope that the knotweed can read the notice!
Curiosity went to look. It seems to have worked. Couldn’t see any knotweed at all on the other side of that fence, nor this side either.

Nonsense asks “Don’t you just love the unintended fun to be had with notices?”

The wasteground proved to be interesting once Curiosity had bullied The Knees into stopping again. There were flowers everywhere …and this is mid November. I started collecting a few and then Curiosity decided we needed a count. Seventeen different ones still in bloom!
Curiosity can be contagious. Two older ladies stopped to see what I was up to.They were amazed too. I found they knew very few of the names. Shame really, because just a little bit of that kind of knowledge..Ladybird book level can make taking The Knees on their daily a real interest. But it is fun to have a chat with someone about something. When you walk alone, or with a dog, you do find many people willing to grin back and say hello, but starting a chat usually needs a topic. I find asking a question the best way to begin. But doing something strange for your age seems to work too!

Maybe it is a good way of making the world Age Friendly? All us Knee walking Oldies smiling at everyone we pass? And doing fun things?

The walk ended with 2 final grins.

How and why did that get there? A pink broken scooter hanging on a fence. Can’t you just imagine the story behind it? Crying child, frustrated parent, “waste of money” etc etc We have all been there…Imagination had a lovely time for the next ten minutes. He can come on the next walk.

And at a park entrance where cars were prohibited was a 5 mph limit. To whom did it apply? Runners? Dog walkers?

The Knees liked it. Happy to obey. 1 mph suits them……