The Knees and The Curiosity took a walk in Queen’s Park. Walk No 4.

Queens Park is one of Glasgow’s five stunning parks which were designed by Sir Joseph Paxton of Crystal Palace fame. He was head gardener at Chatsworth and created their famous glasshouses. Which, I suppose, is why Glasgow wanted him – They were rich and could pay for the best. 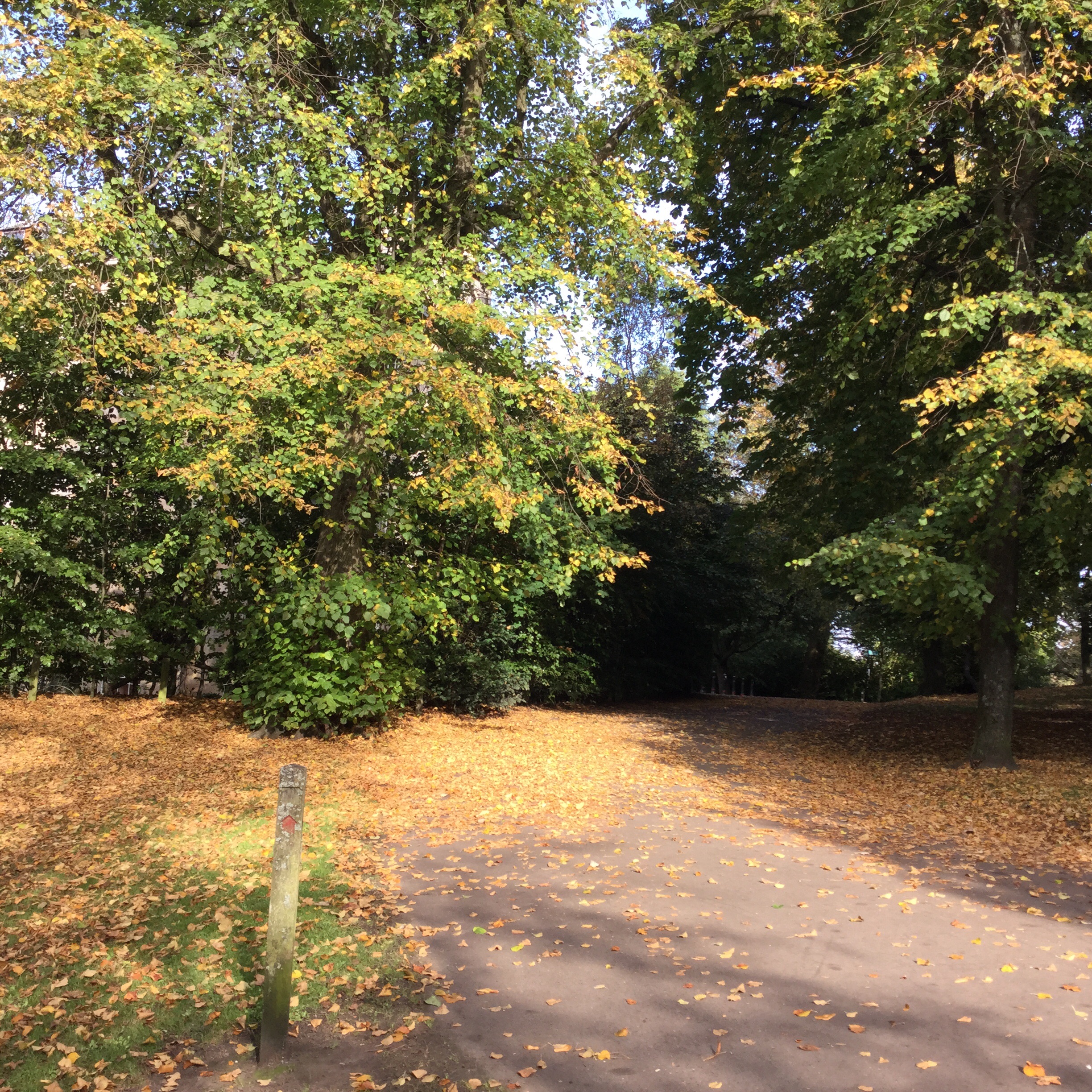 I thought the name referred to Queen Victoria, but it doesn’t.

The Queen of this park is Mary Queen of Scots. It was here, at Langside Village on the edge of the park that she lost her battle for the throne of Scotland and had to flee to England, a prisoner of Elizabeth for the rest of her life.  I wonder if she had  realised as she stood on the hill here and watched? I am sure it must have dawned that life had changed, though maybe she thought she could trust her cousin Elizabeth?

There  is a monument to the battle immediately outside the far gates, but The Knees decided we weren’t going to go that far.

The Knees and The Curiosity are really incompatible as companions for a walk.

The Knees are 80 plus and know it. They are not going to put up with long distances or standing around. Keep moving is their message. The Curiosity on the other hand has never grown up,  still thinks it is six and always wants to dawdle, explore, and play.

The first thing it spotted was this. 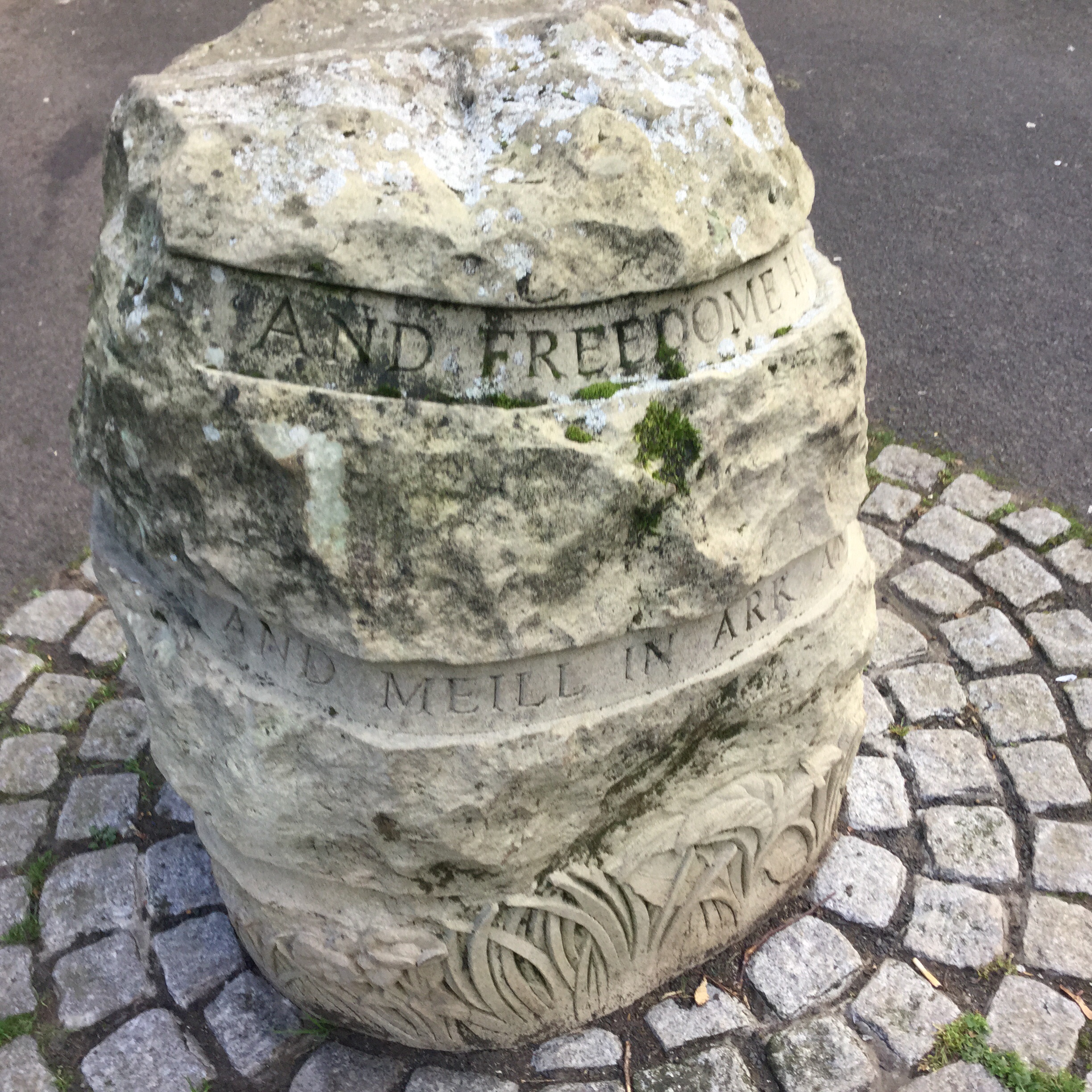 Obviously, from the carving it is a modern piece, but look at the words!  They spiral round and almost sound English, maybe old Scots?

Not anything I  recognise.Who spells ” freedom” with an e? And what does “meill in ark and kist” mean?

There seemed to be similar ones around, but we turned through an inviting  tunnel of dark Yew trees and left them behind for now. 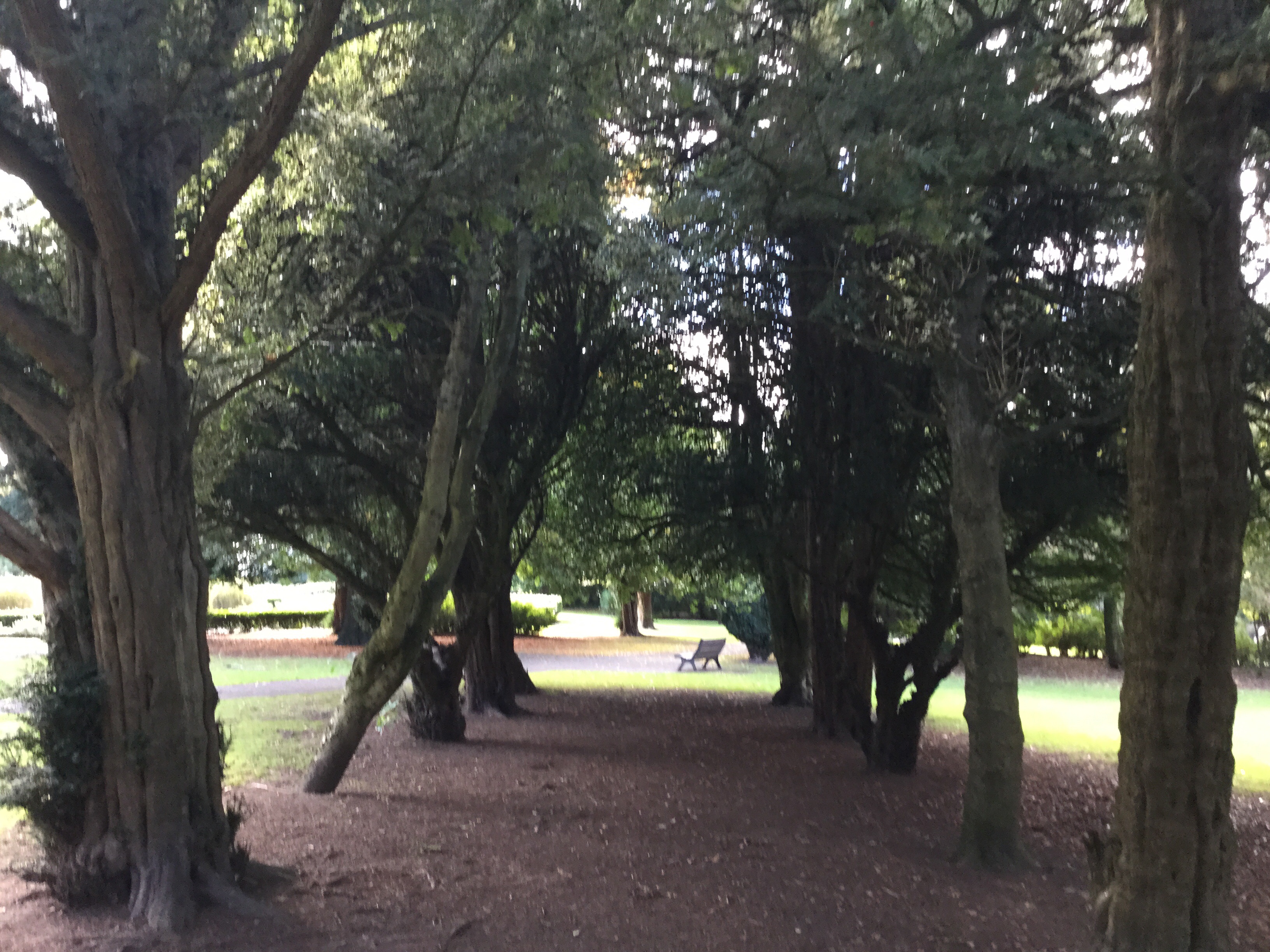 Beyond the Yews was Another mystery.

Why do you suppose this set of steps were built? What for? And what  could have been on that pedestal? 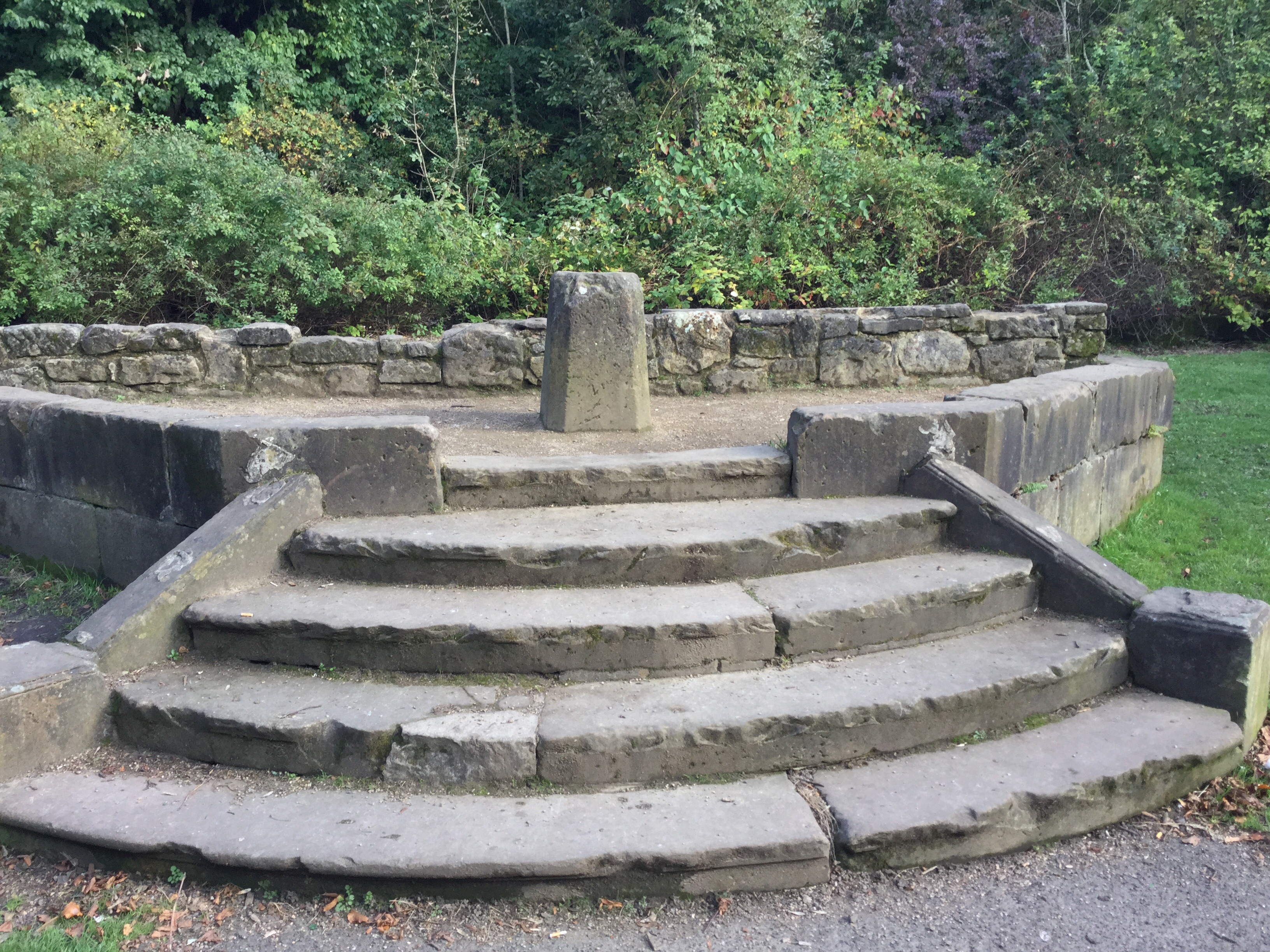 There are absolutely no clues and it is neither in proportion nor elegant. Almost half finished?

Yet it looked old and worn.

However, the six year old me sees potential in that pedestal. It looks as if we are going to have to get creative.

Not quite a dancing platform for fairies, not charming enough, but maybe put a bit of something mysterious on it to intrigue the next child along?

The rule for playing the creativity game is that you have to use what is within reaching distance.  Not a lot here,  some rather nice feathers and the bits of broken glass were quite a pretty colour. Two pieces of bright yellow wool had promise. Where on earth had they come from? How does anyone loose two two inch bits of wool? 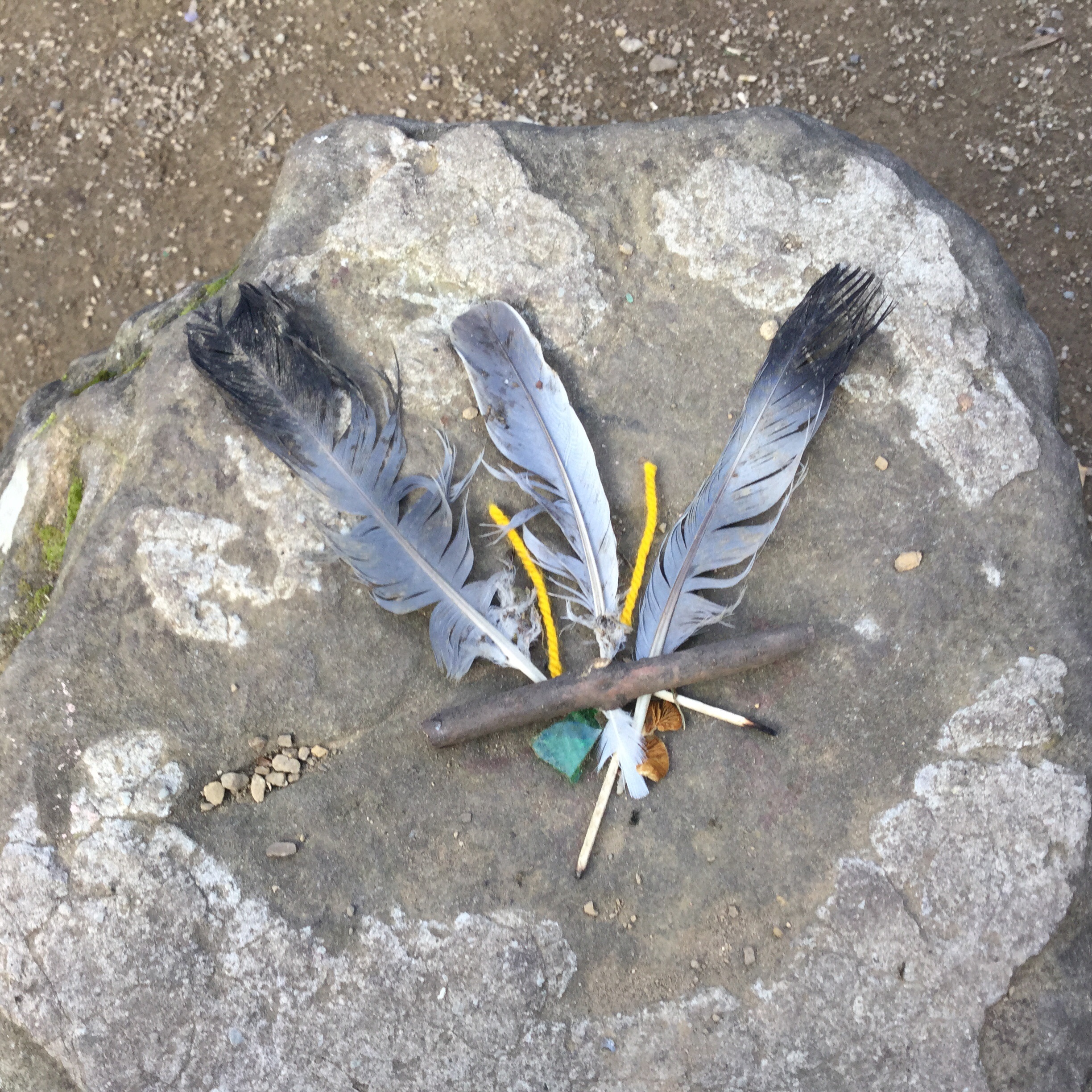 It didn’t work  very well. The breeze was too strong and the feathers had to be anchored.  The only heavyish thing around was a boring twig. Not Turner prize standard. A failure? What do you think?

But decided to leave it and hope some other 6 -81 year old will enjoy puzzling over it. Actually I looked back later and saw a little boy spot it. He wasn’t sure if he was allowed to touch, but eventually plucked up the courage.  I suspect it then blew away.

Turning round I found  this pretty rose garden and a helpful notice. 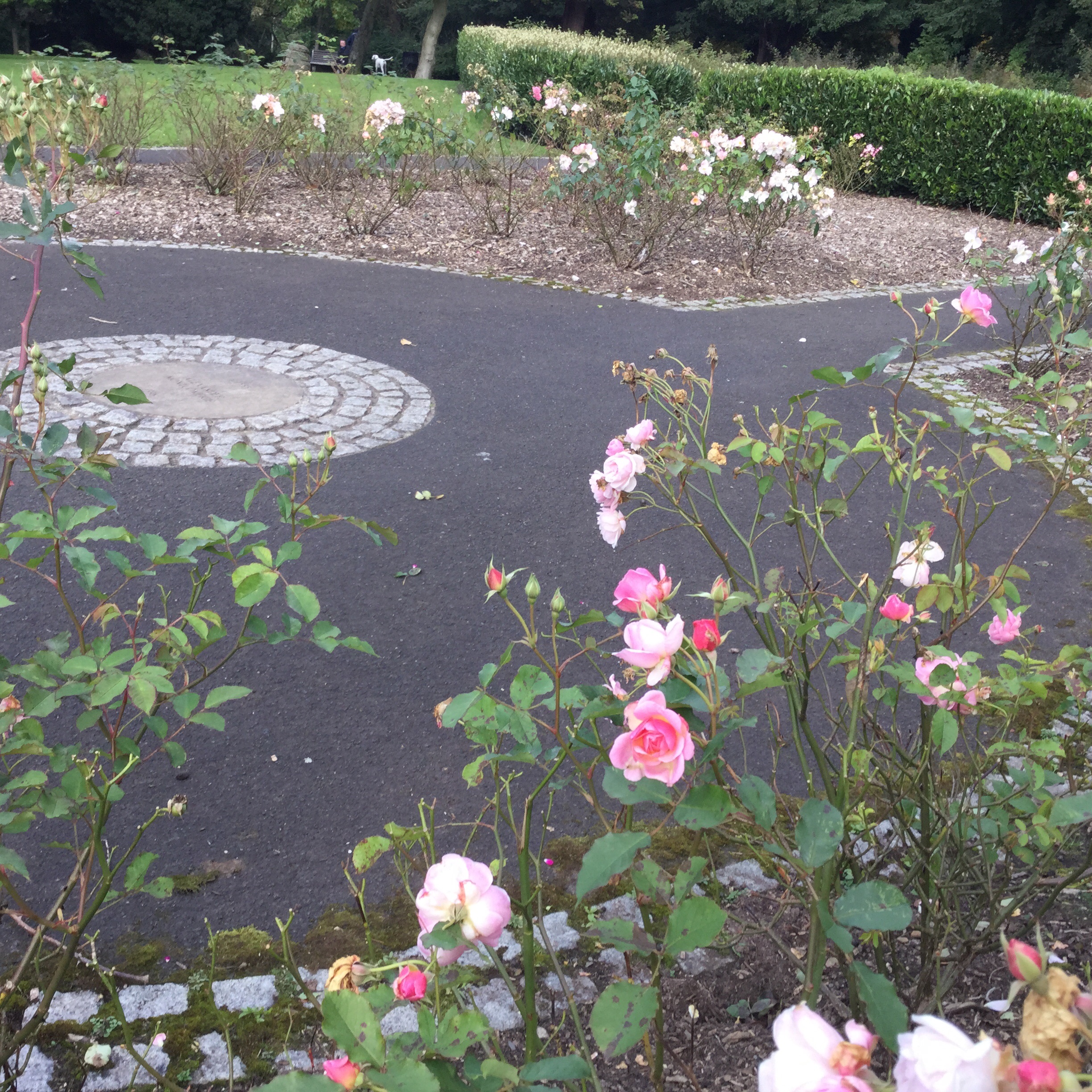 It says the garden was designed to celebrate Scottish poetry and poets. Robert Louis Stevenson and others had their names in the centre of  stone circles like this one , though not all had a mysterious carved pillar.

The notice listed all their names and dates.

First is  Robert Hennryson 1420-1490, which solved the question of that first carved stone. He was writing in mediaeval Scots I guessed. Would meill translate as meal?  Presumably an ark and a kist are for storing meal.

Anyone out there who can help? 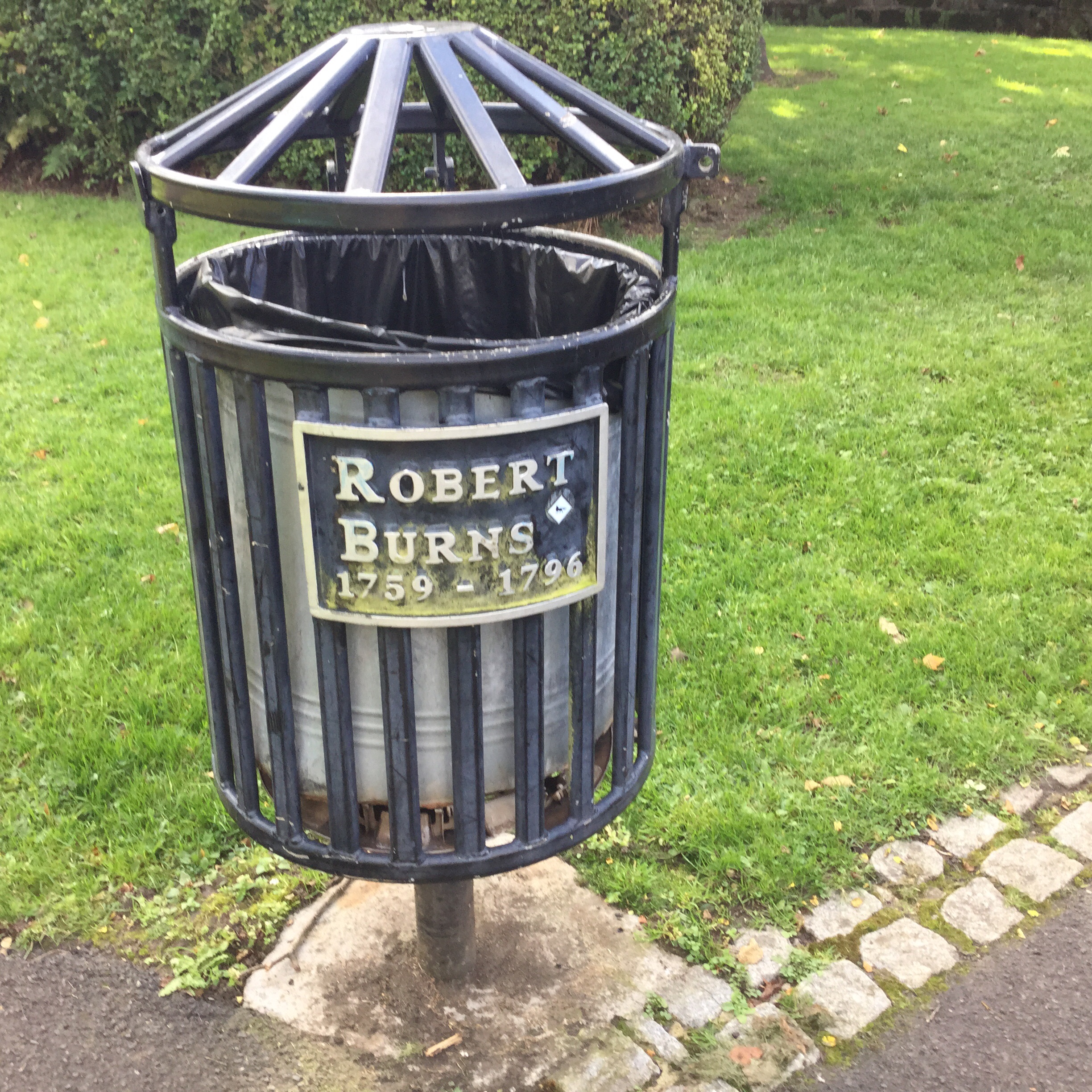 But what on earth has poor Robbie Burns done to deserve a rubbish bin?

The Knees decided they had had enough of this gawping at things, as we would say in Yorkshire.  Muttering began about these walks being prescribed by the GP as 30 mins daily brisk walking for  the good of  knees and The BP.

So off we went. But The Curiosity couldn’t be subdued. 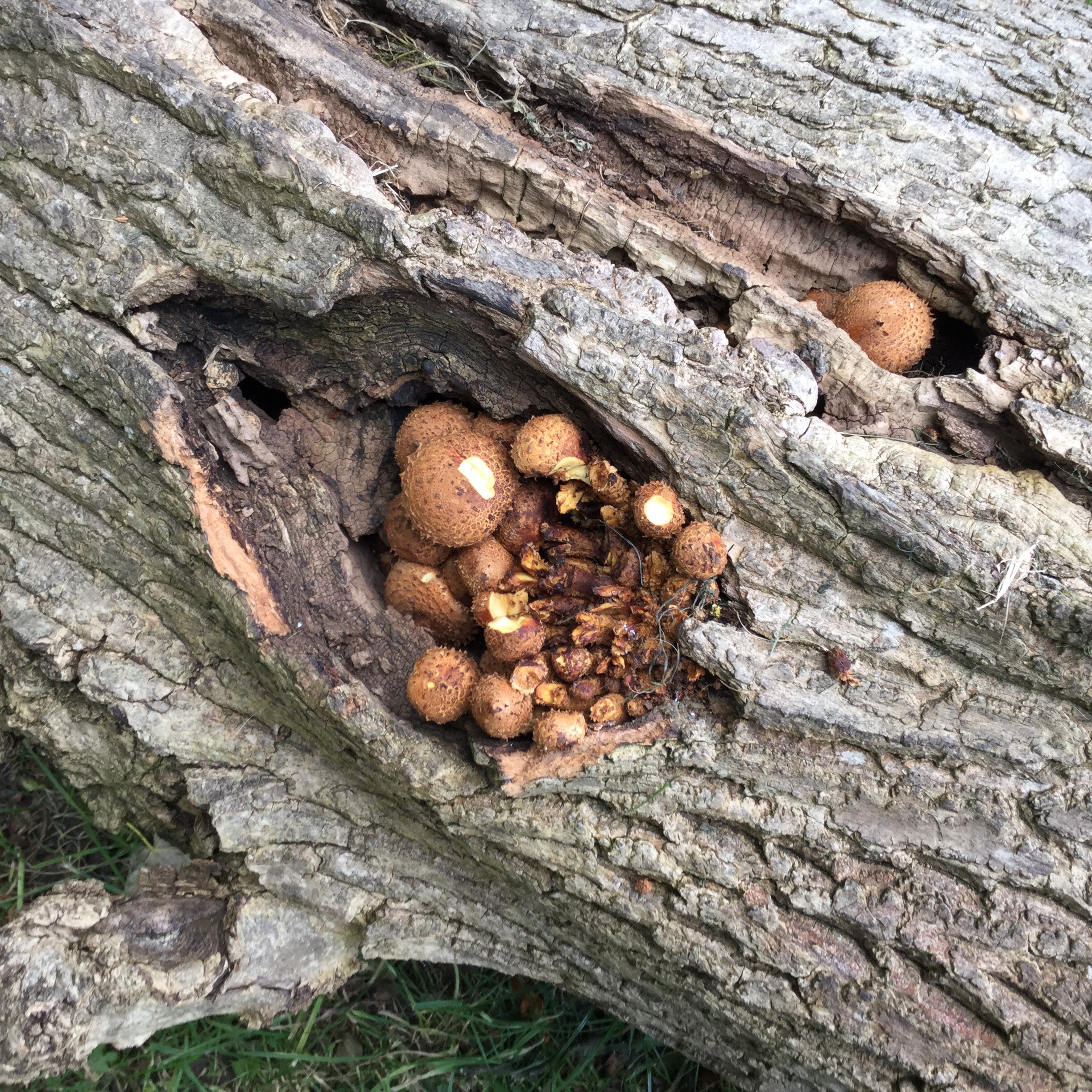 Isn’t it lovely how dead trees go on being part of life?

Look these two  have turned themselves into planters!

Love the way the fungi snuggle together. But that sad little one all alone!  In Coventry? Or playing hide and seek? 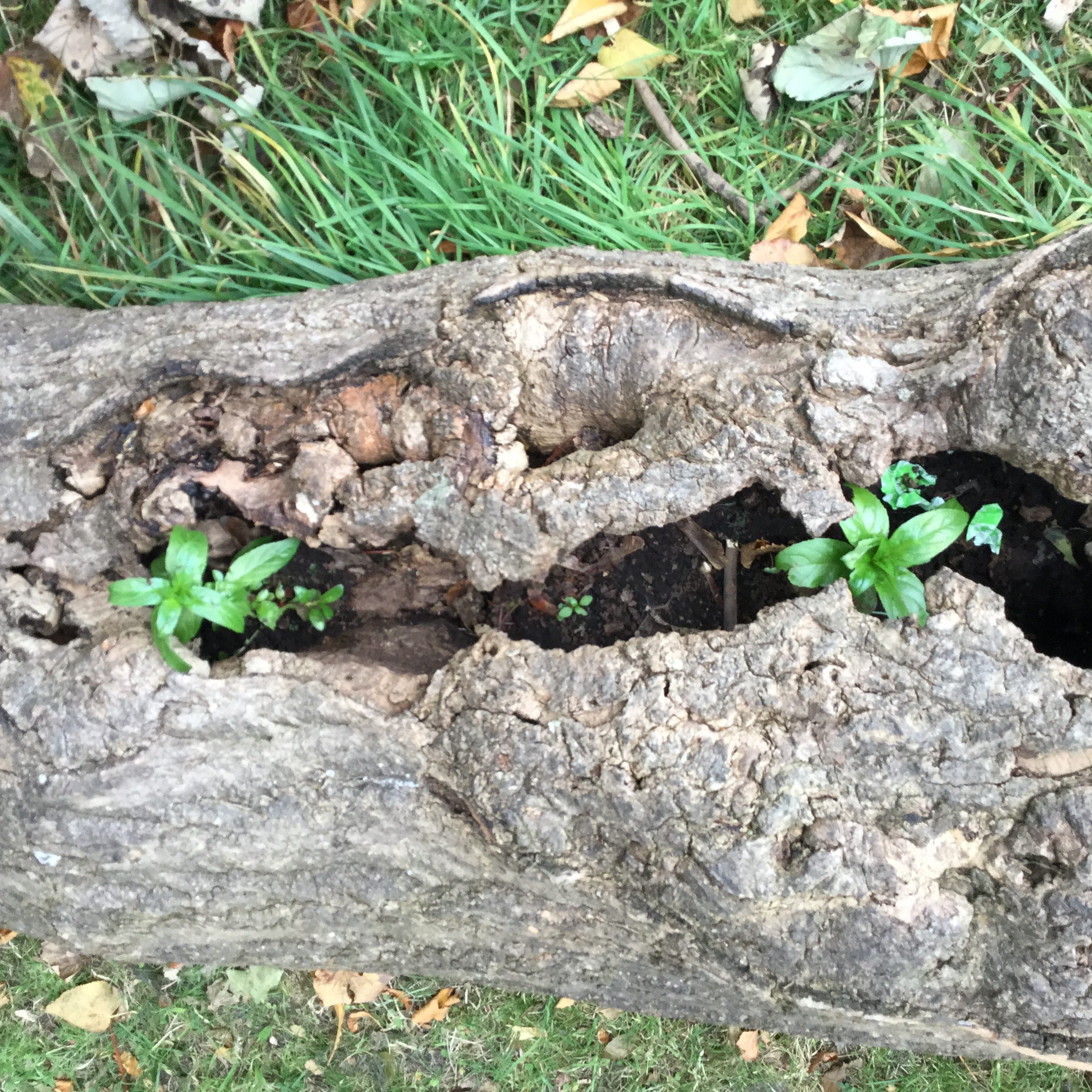 Suspect these would be called weeds, but they look quite sweet now. 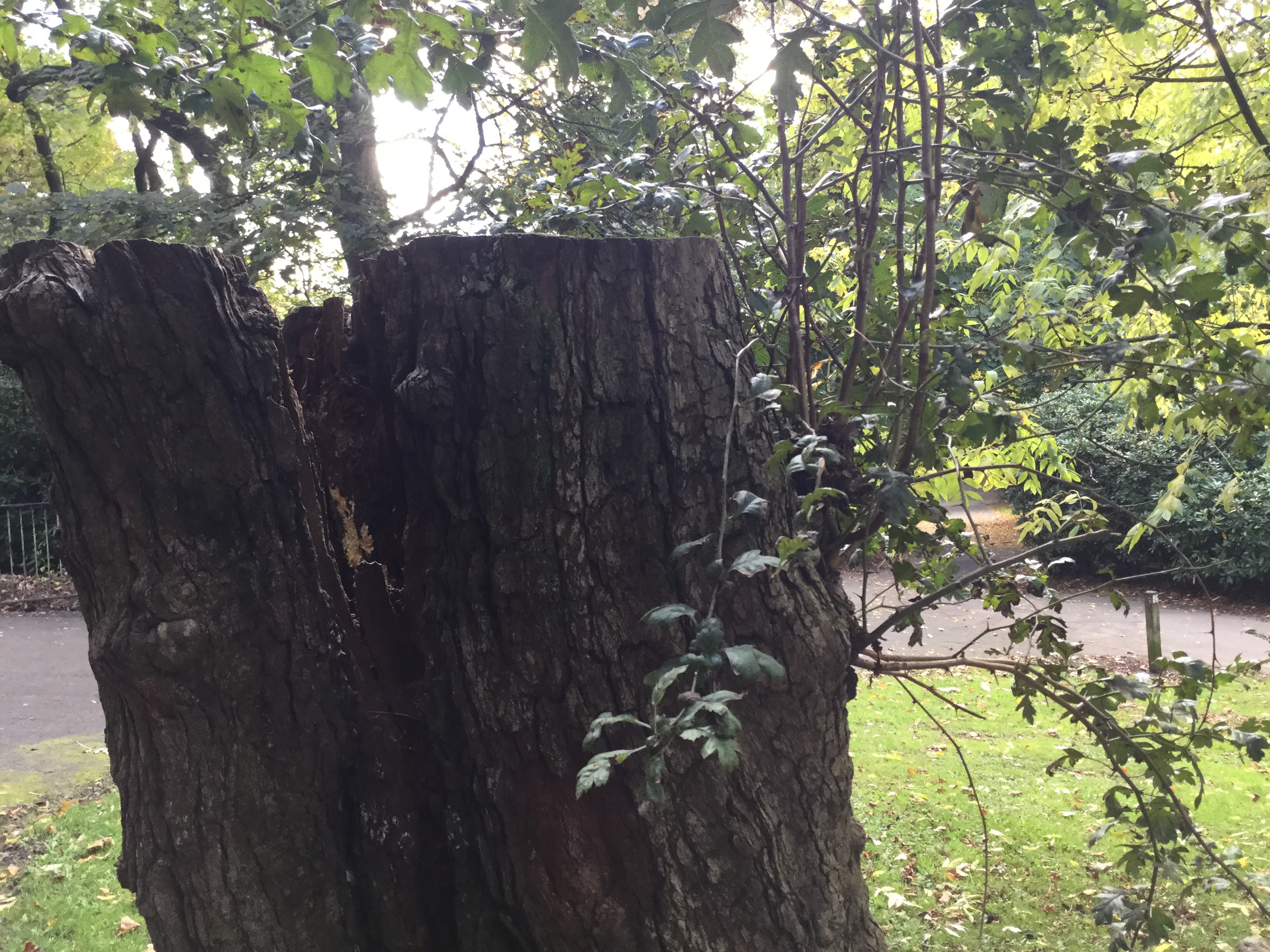 This one hasn’t given up yet.I am glad to see. Trees don’t give up willingly  you know. Though if you have ever tried to get rid of a sycamore seedling you will know that.

And this one didn’t make it. Ah…. The dreaded Red Cross had struck. 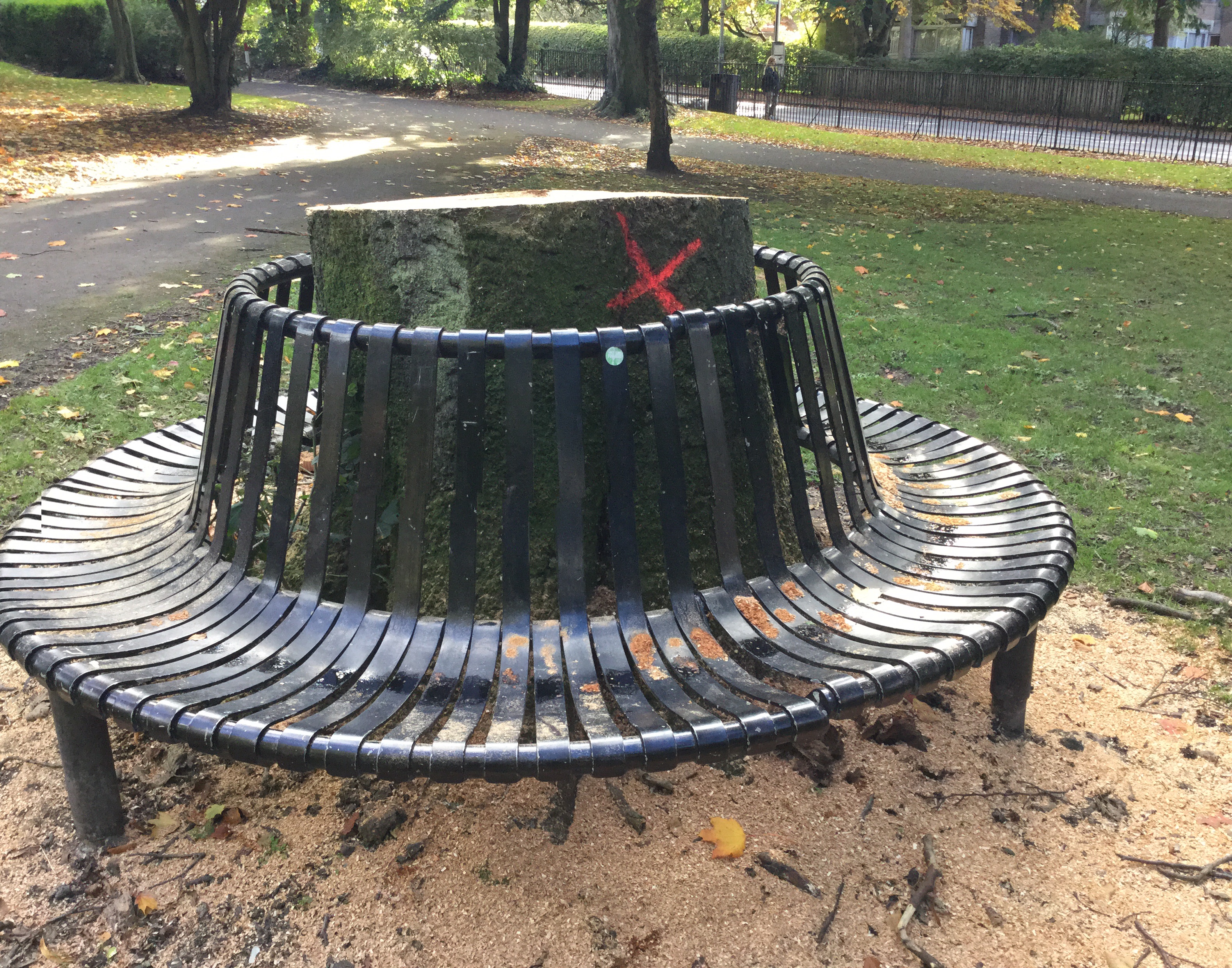 The men with the chainsaws  had arrived, quite recently by the look of it. Rather nice though that they had let  it keep its seat with such charming curves.

I felt it needed stroking.

The Knees suggested we sat on it – just in appreciation you understand.

The Curiosity wanted to know who the designer was.

Energy restored we all headed for the top of Camp Hill

And there was this spectacular view over Glasgow. Worth the effort.That little conical hill in the background is called Dumgoyne and is en route to Loch Lomond. 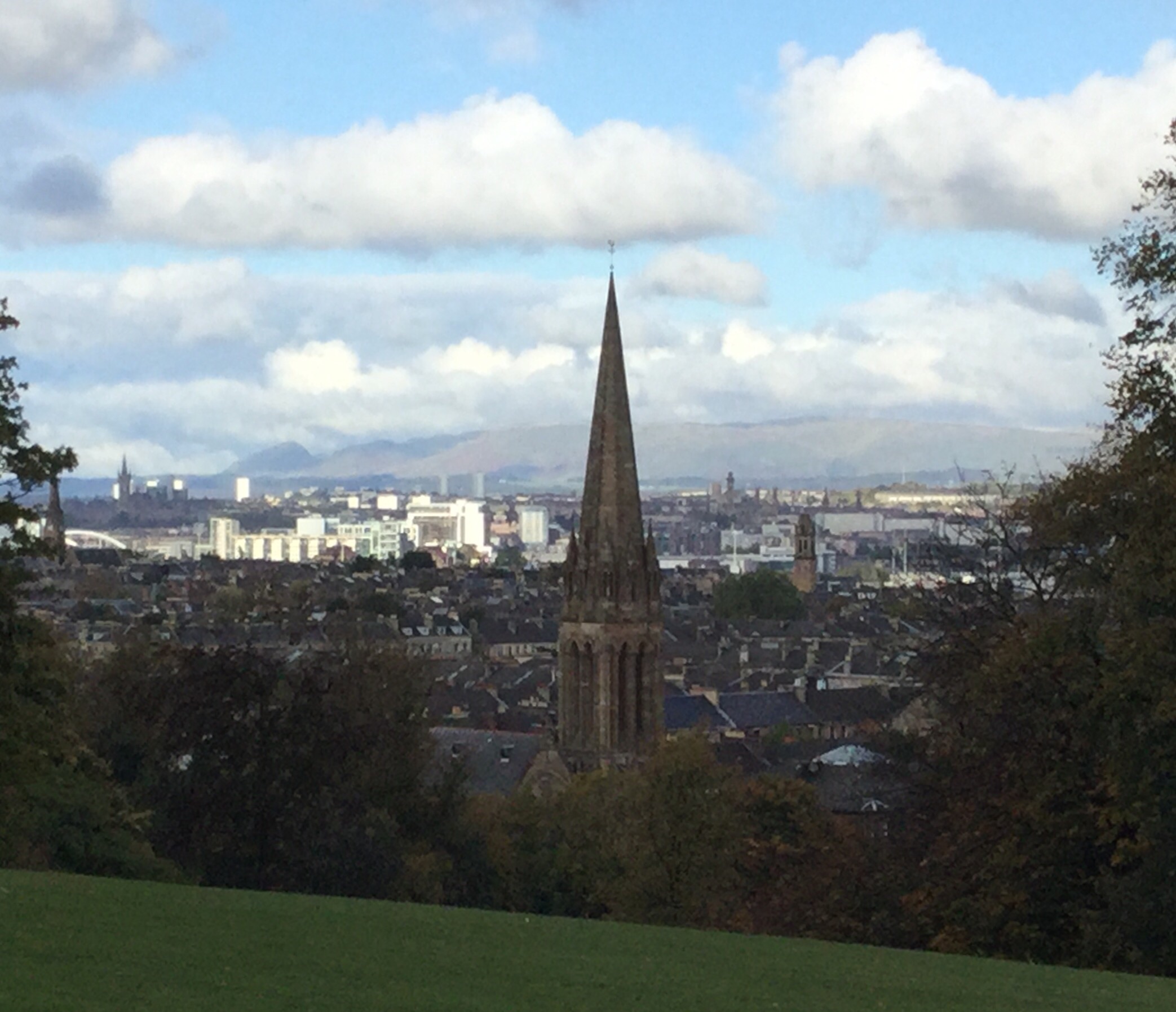 The Knees of course were not at all happy at having to go down.  Funny things Knees, reasonable happy to climb up, but over 70 “down ” is a dirty word.

I shall be writing some more on the subject of Knees. I can feel it coming on.  Knees and how to tame them?  They are certainly teaching me things now which I wish I had understood better when I was a working Physio!

We  Oldies are all expected to take our Knees and The BP for a daily thirty mins walk and if you can go with friends or companions is is always nice.

If you have a child or a dog you can take with you you already have a package of Curiosity along. Wonderful to watch them.

But I rather like my own.Curiosity. My Mother gave it to me. It has been with me for a long time and we understand each other. It frequently asks inane questions or sends me off the beaten track, but walking with Curiosity makes each outing an adventure and it does something very important and delicious for the soul.