I am wondering if  children have unrecognised wise instincts about life?”

An earlier blog  asked “Should children be more exposed to dirt?”

This one asks three more questions.

“Should they play out unsupervised?”

“Should they be allowed to take their own risks?”

Today’s children are sanitised. You might even say brainwashed.
They grow up in a world of antiseptic hand gels and an almost neurotic fear of dirt.

And they certainly have little freedom.

70 or so years ago, kids were not at all like that.

We played outside, in the streets, in farmyards, fields,woods and streams. A real privilege was having a waste dump near your house.You could scavenge anything and everything. Terrific fun. We could make use of  whatever turned up. A particular treasure for girls was finding pieces of broken china which we used playing hopscotch. Boys went for old barrel hoops and if they were lucky, a wheel. Being wartime we had few toys so we had to be creative. Children are! You see slum kids everywhere in the world making kites from plastic bags, and amazing wheeled contraptions. It wasn’t just near your house. We roamed miles, sometimes trespassing, but eluding gamekeepers was one of the skills we developed.

We could take risks.

Trees were climbed, stepping stones negotiated ,or not . Getting home wet was not a cause for parental worry.  It just meant serious punishment if shoes were damaged.  I don’t remember ever getting lost, we seemed to develop navigational skills quite early.

And, yes, there were dirty old men who wanted you to go and see a birds nest in a bush. No problem. We just jeered and ran off.Maybe shouting “We’ll tell the Bobby!” Though we never bothered telling anyone. Except for one incident I found fascinating.  I remember telling my Mother about a man we had seen whose wee was white!  Still no call to the police.  Her only reaction was ” Well I hope you ran off”.  It did us no harm whatsoever. Nothing ever happened to us, and I suspect the present fuss does far more damage to kids.

Cuts, grazes and the occasional break were part of everyday.  We knew that a dock leaf rub would ease nettle stings, that you cleaned a scratch with spit( how did we know it was antiseptic ? )  Even knew to wash a dirty graze with pee.  How did we know that is sterile?

Children seemed to be instinctively tribal.

Without question we belonged to a group. Our road, our alley, whatever.  I suppose it was a version of the LA hood.  However, although we competed, there never seemed any real aggro.Though it did provide a great adrenaline buzz stalking them and raiding their den. Equivalent buzz to today’s computer games? Kids need kicks. 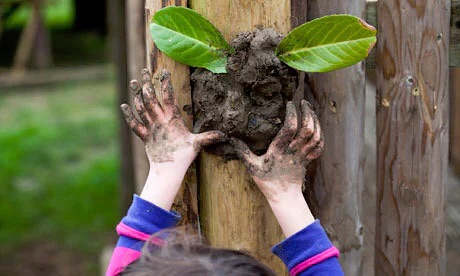 My gang of friends had our den in a ditch. We found a plank for a seat and an old biscuit tin made a fireplace. Another gang a few streets away had their own territory. Their den was under a bent over tree and our fireplace was very much envied. We spent our winter evenings protecting it. And cooking. We cooked anything we could scrounge, usually potatoes from the fields. Inevitably they were only half baked, (we could never wait,) and always covered in mud and ash, but they were all eaten! And with pleasure. It was war time. We were hungry.

I am telling you this, because, travelling the world you start to realise that children everywhere, given freedom all play like this. For some, like the street children of Rio, it is essential to staying alive. And watching news from the refugee camps, the same pattern is obvious.In India kids as young as 4 drive a very hard bargain selling postcards.

We could, at a pinch, feed ourselves.

We knew the various times of year we could find food. We ate nuts and berries and knew which ones were dangerous. We could dig for Food! Have you ever dug up pignuts? And we ate ” bread and cheese” aka new hawthorn shoots. Crops from the fields were another source. The occasional swede was eaten raw, or young green corn (well chomped it becomes like chewing gum) . After the harvest we tried cooking barley porridge. And there were always the Vicar’s apples to scrump.

Somedays we begged flour and went into the woods. There we made dampers, a flour and water paste which we rolled around a green elderberry twig. Once cooked over a log fire it became edible, if smoky, bread.

Yes, we were allowed to have matches and knives, always.

.Interestingly, no adult had told us how to do any of this.

It was all child lore. Older children taught the next generation.

It came as no surprise, after realising how much children pass on, to discover that the counting rhyme we had all used for team games, “Yan, Tan, Tethera ….” was actually the old Yorkshire Shepherds 1,2,3 count for sheep! How long had that been preserved through children’s play in my mining village.
I never heard an adult use it. Until a recent TV programme on old farming methods I no idea what it was either.

Note to today’s parents: everything we did was unsupervised.
Turned out to play for the day and on winter nights, we were expected back only for meals and bed. Nothing untoward ever happened, excep fleas from carrying home a hedgehog.
We became creative, adventurous explorers who could take care of ourselves.

Again I return to the question: do children have deeper wiser instincts than we give them credit for. Take the battle over eating up your sprouts. Most of the cabbage type plants contain a poison which in large doses would not be good for humans. Kids instinctively know that and back off. Crawling babies even know not to fall down steps. Research has shown them stopping at the edge of a step even when the ongoing surface is covered by safe glass.

Preservation seems to be built into kids.
Why have we stopped trusting it?

Looking back to that childhood and then at today’s kids, the  change is alarming.I wonder if we have lost sight of something important?

Is it the responsibility of our older generation to remember, record and perhaps push for reconsideration?