When you are ancient a wallow in nostalgia is a pure delight.

For the last few days I have been doing exactly that  in Scarborough in Yorkshire.

You don’t know it? Then you should, a magical gem, a perfect Victorian seaside resort, arguably the jewel of them all.

I fell in love with it at the age of nine and rediscovering it I am as besotted as ever. 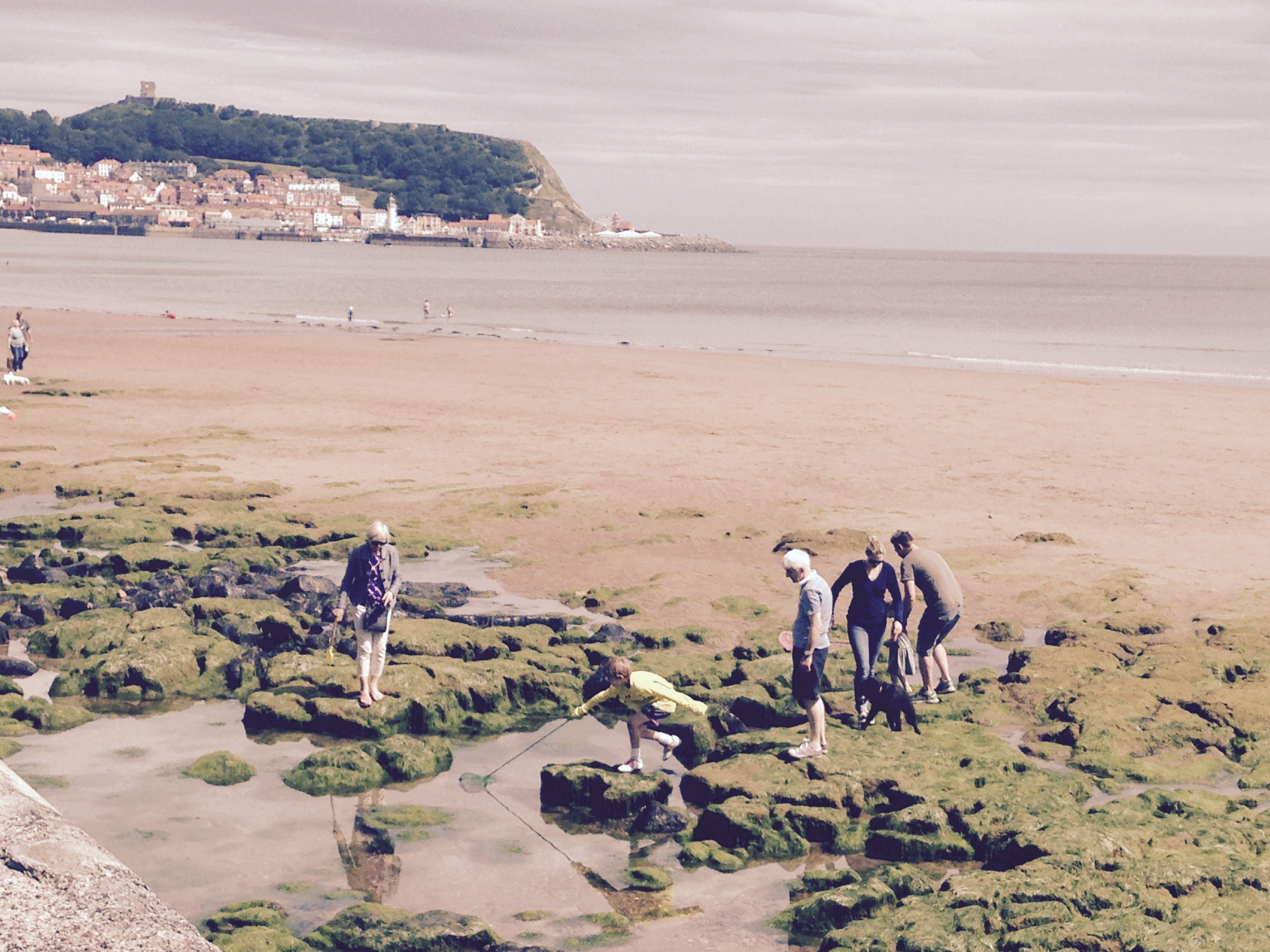 The harbour, the castle, the lighthouse and as always children searching rock pools.

What’s not to love?

Why am I telling you this?

Because sometimes nostalgia is seen as a negative, a wanting to return to the good old days, a backward looking whine….

To my suprise, the visit to Scarborough proved to be a lovely example of the opposite. Nostalgia and the end of an era don’t have to be negative.   Definitely not.

By the time you are eighty  you have discovered with delight that retirement isn’t an end. Not at all.  It is a new beginning.  It is a time to discover who you  really are, time to ask yourself the ” What am I when I am no longer…. ?”question. Scarborough has done just that. And now Great Britain starts its own journey. What are we now that we are no longer a world power broker, that huge Empire gone?

Scarborough in its own way summarises the rise and fall of that Empire.

The world I was born into was pink, not communist, not gay and certainly not feminist. It was the height of Britain’s career as a major power and most of the world map was a Colonial pink. How could it ever be different, we thought. We were the master race.

How wrong could we be?

When the sun never set on our Empire the spa resort of Scarborough was in its hey day. Grown from a pretty little fishing port , it had become the go to place for Victorian Society. Using its beautiful beaches, magnificent cliffs and headland castle they set off to build a showplace of worldly fashion. A magnificent hotel appeared on the foreshore which of course had to resemble a Mughal palace. Rich families built exotic Grecian villas with views. Wonderful gravity trams hauled you up and down the cliffs. But if you were fitter and in the mood for strolling, Cliff walks with Italian gardens cascaded down to a superb Roman forum. There marble columns and a bandstand framed the bay and you could drink coffee listening to the Spa orchestra or join in the tea dance. And for evenings, The Spa Ballroom and theatre.For intellectual stimulation the Philosphical Society built a Museum in the shape of a Rotunda.

But to my 9 year old eyes, the absolute best was the oriental garden of Peasholm Park. A lake, with canoes, everywhere Chinese pavilions and bridges, a Japanese glen to explore, and even better, a tall island with a tall pagoda. Exotic magic to a post war child, even if it had by then become rather seedy.

And that was it. Two wars, a depression plus post war austerity and Scarborough’ s glamour went, along with the Empire. The Mughal Palace became a Butlins.

So to come back this week.

Everything seemed freshly painted, hotels were thriving, the place seemed to have a new feel, adventurous, exciting. Yet on walking around, nothing at all seemed to have changed. 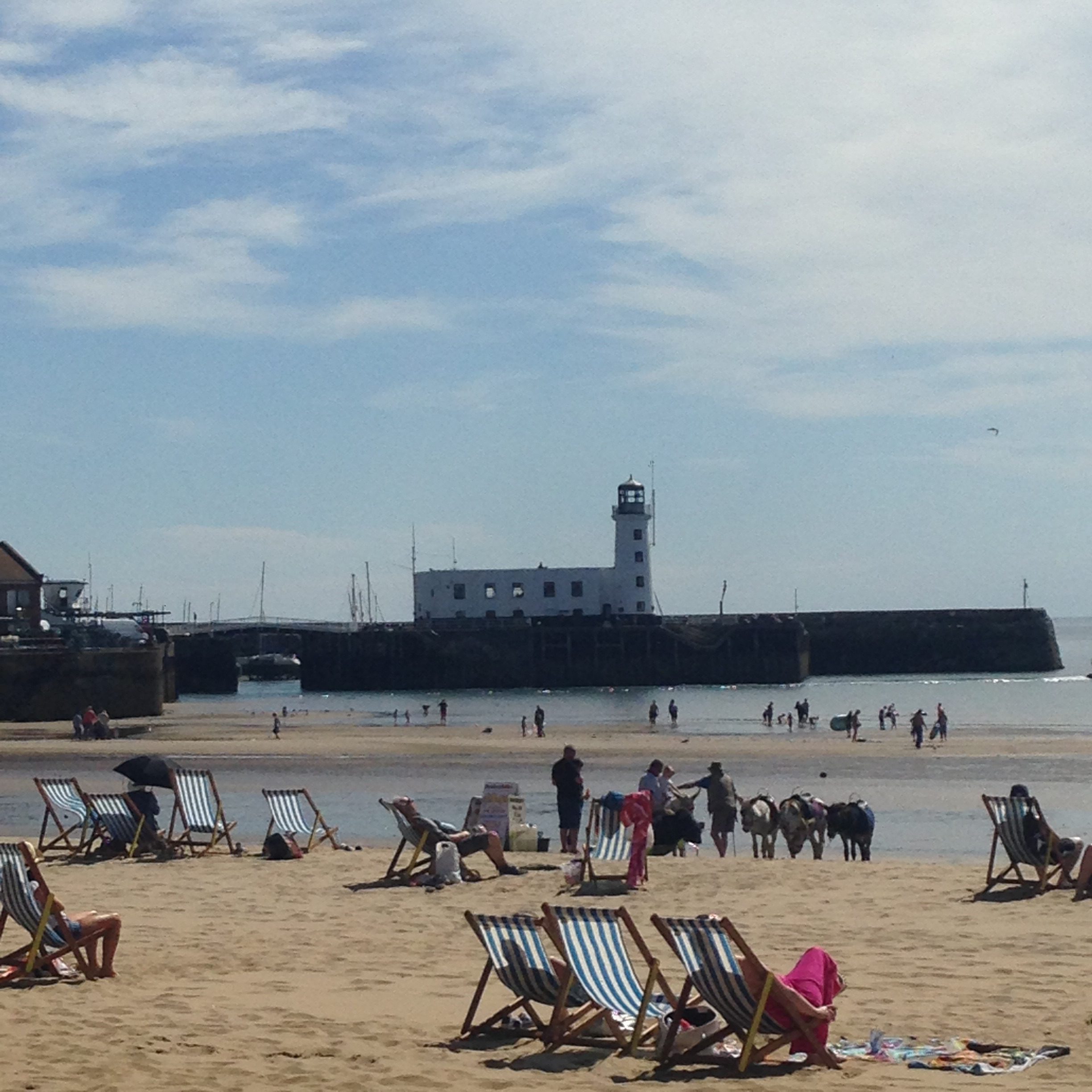 There were still donkeys on the beach. The crab stalls were in their place on the harbour wall, with as ever wonderful fresh caught daily crabs. At 11.00 o clock the Orchestra played in the bandstand whilst the older generation gently snoozed in deckchairs. Nothing had altered the classic view from the Esplanade – fishermen’s cottages the old church and the castle still framed the harbour.
Everything that made Scarborough so special was beautifully preserved. And to my delight, Peasholm Park was miraculously restored and full of children.
Visitors and coach parties were pouring in. All colours were on the beach. Chinese, Hollanders and Scandinavians in the hotel and parties of French schoolchildren giggling at the station. And of course Glaswegians, Scots were there in their hundreds: train from Edinburgh change at York. Three hours to the paradise of preserved Victorian seaside.

Scarborough had done what the British Empire had done, reached its bottom.

Scarborough looked at itself and asked the question”Where from here?”
They could have pulled down everything old. Modern flats could have towered over the harbour. It might have become a Yorkshire Benidorm. But it didn’t. Instead, it built on its own unique historic strengths to find a new role in a different era. Refurbished, recycled and up cycled, the town has repackaged itself. Or should I say rebranded? Trading in nostalgia, it is climbing again. The start of a fresh lifecycle.

Which of course, over the years one recognises as the very clear pattern of life, forever and ever. Constant change, constant recycling……. Empires come and go, but the seeds of the next cycle are there and the youth of today can grow them.

For the newly retired, the answer to the ” Who are we now we aren’t ” question is often amazing….a whole new version of you.  Based on your past, built on the know how  you acquired in a lifetime, you start to grow afresh. It is exciting. A new world opens up and in it you are you, but a different you.

And here I am, newly into Blogging at 80+, yet thoroughly enjoying wallowing in the nostalgia of Scarborough childhood days ...